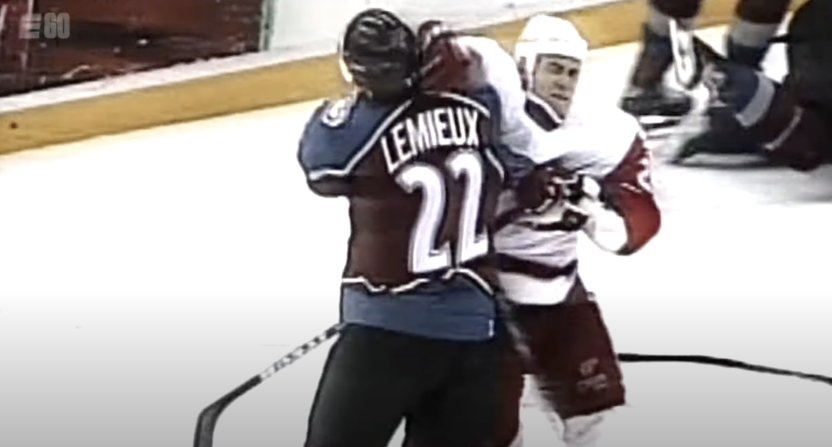 In the 12 years that we’ve operated this site, the most common answer we’ve gotten back to the question “What would you like to see made into a 30 for 30 or sports documentary?” has consistently been “A documentary about the rivalry between the Colorado Avalanche and Detroit Red Wings.”

The wait and anticipation ends on Sunday with E:60 Unrivaled airing potentially hours before a Game 6 of the Stanley Cup Final, which features the Avalanche. Credit to ESPN for expediently green-lighting such an obvious crowdpleaser in their first year of regaining NHL television rights.

So did the film (I watched the extended version that will debut on ESPN+) live up to the anticipation?

If you’re familiar with my reviews, I really have two main criteria: How good of a story is it? And how well did you tell it?

The good news here is that the history of the Avalanche-Red Wings rivalry is a home run of a story and it’s told very well in the documentary. A lot of stylish storytelling, a lot of good access to those involved, and a lot of great existing footage that really fills the two-plus hours. It’s a pretty gripping film, and it’s here that I should probably mention the version I saw was not 100% finished.

My quibbles are on a few fronts, which I’m interested to see if others flag—or if I’m just a snobby prick. Cards on the table, I’m not a huge hockey fan these days, but during the rivalry, I was a pretty engaged hockey fan and was pretty invested at the time as a front-running Avalanche fan.

– The film almost entirely focuses on the 1995-98 seasons. In the four seasons following the endpoint of the documentary, the Avalanche and the Red Wings met three more times in the playoffs, and both teams won one more Stanley Cup. While these years had less drama and fighting, the high stakes in these years and ongoing tension warranted enough to be included in the film. I think most people would share that the general interest in the rivalry extended a full seven years and not just the three depicted in the film. In some ways, I wonder if this perhaps leaves the door open for a sequel similar to how ESPN did one for The U, after its success chronicling Miami in the 80s but leaving a good amount of story remaining.

– For better or for worse, Unrivaled really focused on Kris Draper, Claude Lemieux, and Darren McCarty, with all three giving extensive interviews and Lemieux and McCarty actually sharing the stage together in a 25-year anniversary of the infamous revenge brawl game. This is really the core and impetus of the Avalanche-Red Wings rivalry, but what I think some fans will feel is that the film really didn’t want to stray far from these characters and storylines.

A good portion of the film does talk about the Vladimir Konstantinov accident, but the back half of the rivalry as well as some of the other more notable skirmishes, beefs, stars, roster moves, classic games, and memorable moments that made this a good rivalry outside of the fighting either get a very distant second billing here or really no mention at all. If you were looking for a year-by-year history of how these teams fought, how these teams fared against each other, and how they schemed to better each other, you really don’t get that full serving. This documentary is more or less a heavy steak entree of Draper, Lemieux, and McCarty with a few sparse sides.

– My last nitpick is that Unrivaled seems to mostly serve fans of the two teams from the rivalry and to a lesser extent hockey fans. In particular, the documentary definitely tilts more towards painting the Red Wings as the protagonists in the rivalry. While I don’t object to any of this, I do think more casual sports fans that watch may find themselves searching for a bit more context. There isn’t much discussion about what was going on around the league during this time, and you really don’t get a great feel for just how historically great these teams were in terms of star power.

Additionally, Unrivaled really doesn’t add much context about how the rivalry elevated interest in the sport in terms of fan interest and ratings. While watching, I thought about how much bigger the NHL seemed during this time because of the rivalry, but also, ESPN held the rights to the NHL and didn’t yet have NBA rights. There were large chunks of the sports calendar when the Avalanche and Red Wings were the biggest story in sports with ESPN giving it top billing. For fans who lived through this, that’s easy to remember and sense while watching. But for younger fans or non-NHL fans, you don’t really gain the perspective that this was really a high point for the NHL before the strike year and the sport leaving ESPN and ABC for OLN/Versus/NBC.

All that said, the directors here chose to go very deep with a narrow focus. I can’t say that the result was bad; it just might have not scratched the itch everyone here was looking for. Unrivaled drips in intensity and build-up. There are some great quotes and great revealing stories from the players and coaches involved. It’s a gripping and compelling watch from start to finish, and it’s extremely stylish in presentation and storytelling. The execution of what they chose to focus on is done at a very high level, although I’d say they could have used more raw footage of ESPN clips of the infamous brawls rather than the montage of the fights with Bush’s Machinehead as a soundtrack. Just really can’t go wrong with more Gary Thorne, in my opinion.

If this was a 30 for 30, which I regularly review and give a ranking to, this would be somewhere in the top 25-30% of the installments. It’s a solid B or B+. I’m curious if Avalanche fans will feel their side of the story was represented fairly, and I’m certainly interested to see if others feel the film didn’t stretch far enough into the rivalry. At the end of the day, fans have been wanting this for quite a while, and ESPN delivered with a very entertaining and deep documentary that’s crafted quite well. Perhaps — a la The U —  we get a second serving down the road?