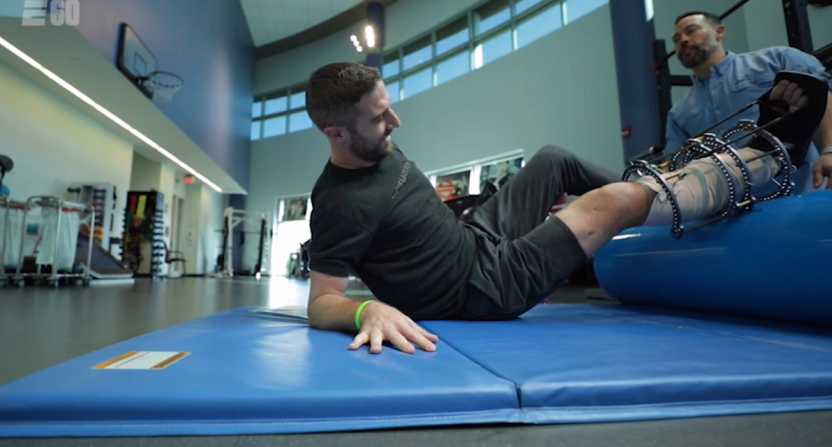 This Friday, ESPN’s E60 will air “Project 11”, a one-hour all-access documentary about Alex Smith’s rehab and recovery from a gruesome 2018 leg injury.

ESPN released a few clips from the program along with details as to what the show will be covering.

Just over 17 months ago, NFL veteran Alex Smith suffered a severely broken leg while playing quarterback for the Washington Redskins. The story of how bad his injury was, including his battles with post-operative infection, of how doctors and Smith’s family had to make life-changing decisions, and of his intense recovery and rehabilitation, has never been fully told until now.

In a special edition of E60, “Project 11” will document Smith’s riveting story, from lightly recruited high school quarterback to battle-tested former No. 1 draft pick fighting his way back from an injury that almost cost him everything. The program debuts on Friday, May 1, at 7:30 p.m. ET on ESPN.

“No NFL player has ever been through what Alex Smith has,” said Andy Tennant, E60 executive producer. “He’s normally a very private person but he wanted to document his road to recovery as well and as detailed as possible, with the hope that future players could use it as a road map.

“The access that he and his family granted to E60 is incredible and viewers will see a story of strength, dedication and perseverance.”

It’s impossible to tell this story without going into graphic detail, and it sounds like “Project 11” isn’t going to sugarcoat anything.

ESPN injury analyst Stephania Bell spent more than a year documenting Smith’s journey for E60, with rare and exclusive access to Smith, his family and his doctors, who deemed the injury “warlike.” Viewers will see:

Interview participants include Smith’s coaches from across his career, including Urban Meyer, Jim Harbaugh, Mike McCarthy, Andy Reid, and Matt Nagy, along with former teammates and JJ Watt, who delivered the hit that shattered Smith’s leg.

There will also be shoulder programming throughout the week across various platforms:

OTL on SportsCenter – The daily Outside the Lines segments in the noon ET edition of SportsCenter will be dedicated to “Project 11” every day this week with special guests connected to Smith and the story. On Friday, Smith will be on the program with host Ryan Smith.

ESPN Daily Podcast – Host Mina Kimes will talk with Smith and Bell about “Project 11” on Friday, May 1.

ESPN.com – Bell will have a written version of “Project 11” on ESPN.com to accompany the E60 program. The piece will be from the point of view of Elizabeth Smith, Alex’s wife.