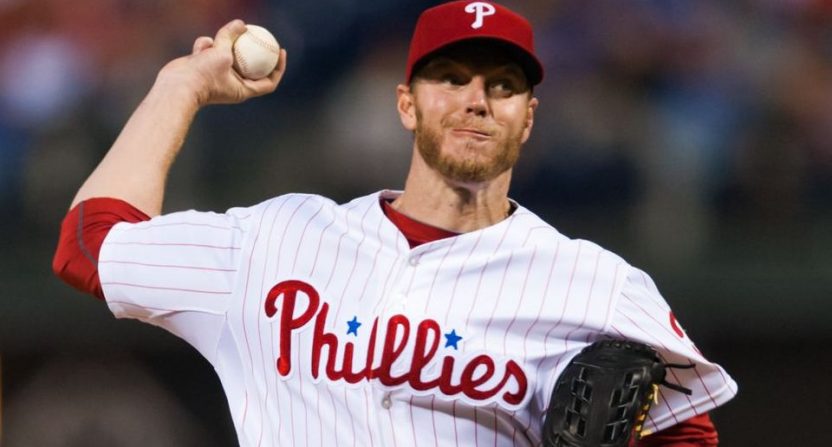 “Perfect? I hate that word, perfect.”

ESPN’s latest E:60 special, Imperfect: The Roy Halladay Story, sets a tone with that clip of Brandy Halladay at the end of its introductory credit sequence. (It’s later revealed as part of Halladay’s interview with reporter John Barr.)

The contempt in Halladay’s voice when she says those words is visceral. “Perfect” represents the expectations that her husband, Hall of Fame pitcher Roy Halladay, placed on himself. It was a standard for which he constantly strived, yet the burden of that pursuit was too much for him to carry.

That’s the prevailing theme of Imperfect, which premieres on the 10th anniversary of Halladay’s perfect game for the Philadelphia Phillies versus the Miami Marlins. The documentary chronicles Halladay’s life from his youth to his tragic final years.

We see him as a youth, honing his pitching form in the family’s basement and developing a love for flying. (Halladay’s father was a corporate pilot). Then the story follows his tragic final years when dependence on opioids and missing the adrenaline from playing baseball compelled him to make poor choices that eventually cost him his life.

Just as it was surprising to learn of the many substances Halladay had in his system when he died in a Nov. 7, 2017 plane crash off the Gulf Coast, footage in the documentary includes striking signs of the pitcher’s struggles that likely went unnoticed at the time by media, team officials, and fans.

Postgame media interviews show Halladay in a likely drugged state, under the influence of painkillers, speaking slowly and taking too much time to collect even the simplest thought. (Barr also reveals that those drugs weren’t obtained from team physicians or with a prescription, but cash payments to local doctors.) After his retirement, photos and video reveal that his weight fluctuated wildly.

Only those closest to him, such as Halladay’s family and former teammate Kyle Kendrick (who’s interviewed by Barr), had any indication that something wasn’t right.

"I don't want his end story to be: Roy Halladay's a drug addict, who crashed his plane." Brandy Halladay told us as she sought to contextualize her late husband's battles with addiction, depression and anxiety. Watch @e60's #IMPERFECT Friday 7pm ET on @espn pic.twitter.com/rCiF3vy5Sy

Some might think Imperfect doesn’t include enough interviews to fill in a full picture. Though Barr tries to widen the scope, talking to ESPN’s Alex Rodriguez and Buster Olney. He also speaks with the officer first on the scene of Halladay’s accident, taking a boat out to the crash site.

But the limited interviews are part of the point. So few knew what Halladay was going through, a point Brandy Halladay emphasizes in her conversation with Barr (and the speech for her husband’s Hall of Fame induction). And really, the strength she demonstrates in explaining who Roy Halladay was to Barr (and the viewing audience) makes her such a powerful presence that the documentary doesn’t need anyone else.

Imperfect might feel like an incomplete story, but it follows a life cut short. Halladay’s untimely death was all the more tragic because he had a support system in place and a family that loved him. The shame of admitting his faults was more than he could bear, but those he left behind are up to the task, thanks to Barr’s reporting.