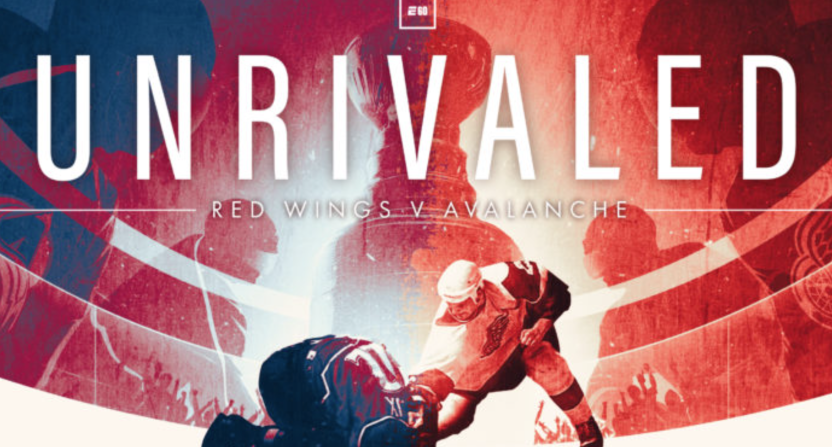 The hockey doc will explore the storied 90s rivalry between the Colorado Avalanche and Detroit Red Wings, timely material considering Colorado’s return to the Stanley Cup Final. The Avs are currently up 2-0 on the Tampa Bay Lightning, but if the series goes six games, Unrivaled will be lead-in afternoon programming on the 26th ahead of Game 6, set to air at 8 PM Eastern on ABC.

We’ve known about Unrivaled for a while now, but a release today from ESPN fleshed out a lot of the details.

Back in the spring of 1997, in a series of interviews, Avalanche and Red Wings players were asked to define the word “rivalry.” Avalanche forward Claude Lemieux said that it “starts on the ice, but if it stays there, there is not that much to it.”

It started out as two teams decorated with highly-skilled future hall of famers relentlessly pursuing the holy grail of their sport. It became a ferocious clash, fueled by an incomparable hatred not often seen in major sports. This was more than a mere rivalry; it was a blood feud. Its white-hot intensity would lead to games and moments both thrilling and chilling, to indelible victories and premeditated acts of vengeance.  The story of the rivalry is one of lifelong bonds, life-changing moments, a remarkable brotherhood  and a never-before-seen public reckoning of revenge and retribution. Two and a half decades later, those who were part of it are still coming to terms with how the brutal rivalry went as far as it did.

In Unrivaled, viewers will hear from many who were involved with the two teams at the time including Lemieux, who was at the center of the start of the rivalry that exploded on March 25, 1997, in a massive brawl in Detroit’s Joe Louis Arena. The Red Wings’ Kris Draper, who had been seriously injured when he was checked from behind by Lemieux in a playoff game the year before, and Darren McCarty, who sought revenge on Lemieux in the big brawl, also speak about the rivalry in the program.

While the doc itself looks fascinating, there’s a note about the streaming presentation that stood out:

After Sunday afternoon’s initial airing, an extended version of Unrivaled with exclusive content will be available for on-demand streaming on ESPN+.

ESPN has for a while now made their documentary archive a key aspect of their ESPN+ content library. The ability to have the 30 for 30 library available on demand is a nice value-add from a content perspective.

But on the whole, adding extended versions to the streaming platform could be a really good way to add even more value, and possibly even add subscribers. That’s not to say this E60 project is going to lead to a massive uptick in overall subscriptions.

It’s smart, though, to utilize ESPN+ in this way. Without broadcast constraints to consider, it allows for more details and scenes that might appeal to the more diehard fans of a certain subject matter. It just makes sense to treat it as its own platform, as opposed to simply housing things that already appeared on ESPN proper.