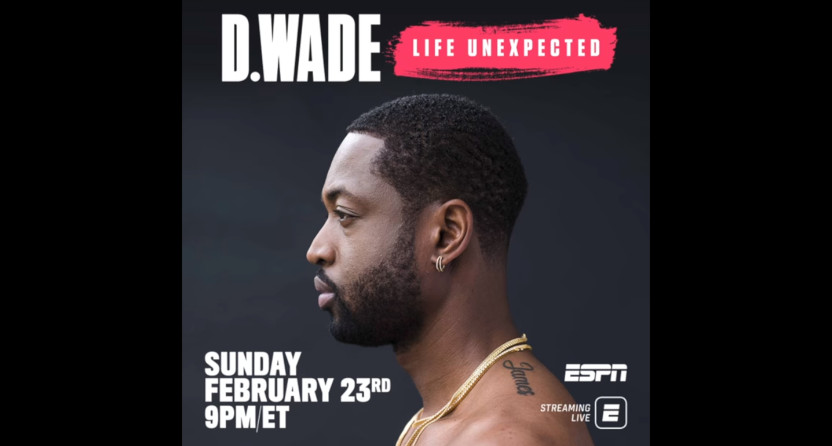 The latest documentary coming to ESPN is on Dwyane Wade. The NBA star turned Turner analyst is the subject of D. Wade: Life Unexpected, a new feature documentary from ESPN Films and Imagine Documentaries that will premiere on ESPN Sunday, February 23, at 9 p.m. Eastern.

The film is directed and executive produced by Bob Meletus, described in ESPN’s release as Wade’s long-time friend and cinematographer, and it’s produced by Imagine Documentaries president Justin Wilkes and executive vice president Sara Bernstein, as well as Imagine Entertainment chairmen Brian Grazer and Ron Howard and Emmy-winning producer Sam Pollard. It will cover Wade’s early life, including drug raids on his house as a young child, his time at Marquette, including him becoming a father as a college sophomore, and his time in the NBA, including behind-the-scenes footage of the 2010 free agency drama that saw LeBron James and Chris Bosh team up with him in Miami. D. Wade: Life Unexpected will include content from hundreds of hours of home movies, exclusive video diaries, and all-access footage shot over the last decade.

Here are some quotes on it from the ESPN release:

“Bob’s film is a raw, intimate and unfiltered look at not only a super-star athlete, but a father, son and husband who’s continuously risen above life’s challenges to create a better world for himself and those closest to him,” says Wilkes.

…“I’m excited to share a side of myself with the world that not many people may know,” said Wade. “This deeply personal documentary will give fans a never-before seen look not only at the behind-the-scenes of my sixteen year career in the NBA, but will peel back the curtain on my personal life – the highs, the lows and everything in between –  showing how I created my own path to get to where I am today.”

“Having had the opportunity to bear witness to Dwyane’s career over the years has been a privilege, and I’m honored to have been granted access to capture these powerful moments on and off the court during his journey,” said Metelus. “This is an honest, raw depiction of a truly inspirational man, and I’m thrilled to be able to share Dwyane’s story as a three-time NBA Champion, but also as a father, husband, businessman, philanthropist, style icon and friend.”

Like Willie, announced Tuesday, this is a film ESPN acquired rather than one they commissioned and did in-house (the way they do with the 30 for 30 series), but it’s one that seems to make a fair bit of sense for them to pick up. There’s a lot of interest in Wade’s life, and ESPN does a lot of basketball coverage, so it’s a fit there. And while there are always some questions about how good a documentary will be when its subject is so close to it, it’s promising that this is being promoted as covering not just Wade’s on-court success, but some of the challenges he’s faced as well. The combination of home movies with archival and all-access footage has paid off very well for some other documentaries recently, including Diego Maradona and Any One Of Us (both of which aired on HBO last October).