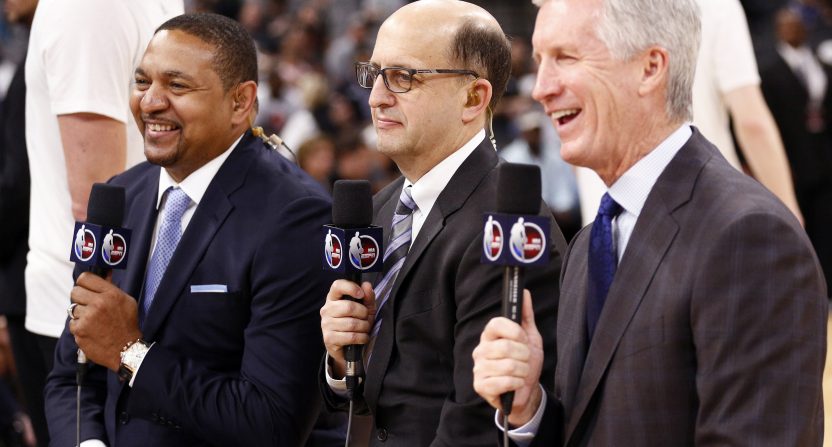 ESPN has the Eastern Conference Finals this year, a series that has seen LeBron’s Cavs win Games 3 and 4 in Cleveland to tie things up 2-2. Neither game has been particularly close (in fact, none of the games have been that close, an unfortunate theme for this postseason), but Game 3 featured the Celtics turning to little-used rookie forward Guerschon Yabusele for extended minutes in the first half.

Yabusele ended up playing 11 minutes total, the most he’d seen since getting 11 minutes in a big win over Milwaukee in Game 2 of the first round. It was a questionable choice from Brad Stevens; why have Yabusele in there early, even with Boston down big? Were they essentially conceding or experimenting? Or did Stevens think it was the best way back?

Doris Burke is doing sideline reporting for ESPN’s playoff coverage, which is already an arguable waste of her talents. (A booth with Mike Breen, Burke, and Jeff Van Gundy sounds a lot more intriguing than the current three-man setup.) But it gets even worse, because as Burke told WEEI’s Dale and Keefe, she wanted to ask Stevens about Yabusele’s minutes during the game, but Mark Jackson and Van Gundy shot down the idea.

“There was one substitution I was really curious about and I didn’t understand it,” Burke said. “The Yabusele minutes I was taken aback and I literally, guys, asked my producer to open the mic during the timeout to say to Jeff (Van Gundy) and Mark (Jackson), ‘Is it inappropriate for me to ask this question in this setting?’ Both of them said yes, don’t ask Brad that question, so I did not.”

They’re former coaches, obviously, and they’re clearly going to err on the side of not making a coach the slightest bit uncomfortable. But that’s not the job of a reporter, obviously, and if Burke can’t even ask a simple question about a substitution choice, what are we even doing here?

In-game interviews have always felt perfunctory, but now we know there are sometimes people working against making them interesting, and sometimes those people are on the network. If you’re an analyst, you should be trying to give the viewer the best possible understanding of the game, and you should be supporting coworkers who are doing so as well. Protecting a head coach from having to answer a fair question should never be part of the job but that’s more or less the expectation or shared understanding networks now share with the league.