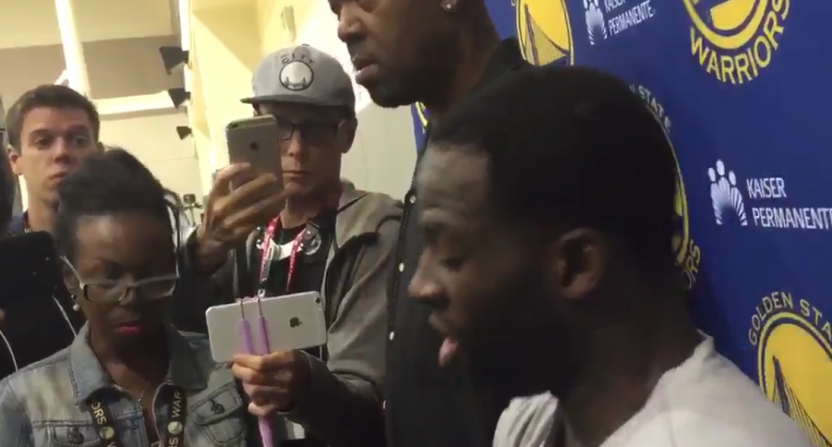 The latest ESPN critic is Golden State Warriors’ star forward Draymond Green. While talking to reporters Wednesday, Green answered a question about his thoughts on the comments he made Monday about the Cleveland Cavaliers’ opposition so far (which led to headlines like ESPN’s “Draymond Green disappointed Cavs’ opponents going down easily” and The Undefeated’s “Draymond Green is bored by these NBA playoffs“) with a rant about the way ESPN and other media outlets covered his comments:

Draymond Green frustrated with the way some of his comments are plucked into shorter headlines and blasted out controversially pic.twitter.com/VB0IMLS8te

The reporter talks about how you could make the same claim about the Warriors (also 8-0 so far), and Green then interrupts and said his Cavs’ comments were taken out of context.

“I didn’t say I was disappointed with their competition. First off, people always want to take a statement and put a piece, take a piece of a statement, and say, ‘Aw man, Draymond said the Cavs aren’t playing anybody.’ They never say ‘Draymond said Cleveland’s playing great basketball.’ Everybody’s always chasing the headline, the controversy. Watching ESPN is like watching a controversial reality TV show. It’s pretty pathetic that that’s the headline everybody wants. ‘Draymond disappointed with who Cleveland plays.’ Do I care who Cleveland plays, or how the other team plays? But I am a basketball fan, and I know what I want to watch as a basketball fan. So I don’t understand how all these things are always made so controversial. Not that it alters my daily life. I still go home and have fun with my kids and have a great day. But it’s just ridiculous how everyone’s always searching for a controversy. So that will be your headline of the day, ‘Draymond says Cleveland’s playing great basketball.'”

Does Green have a point? Let’s consider the quotes from him in the aforementioned ESPN piece, by Chris Haynes:

“I thought teams would compete a little harder,” Green said after shootaround on Monday. “I just watched San Antonio-Houston. I like to watch good basketball. When you watch Cleveland play, you’re only watching one side of the good basketball. That’s kind of weak.

…Green says that even though they’re handling teams with more ease than the Cavaliers, he argues they’re facing stiffer challenges.

“Nah, but I think Utah is still playing good basketball,” he said. “Regardless if they win or not, I think we’re a better team. But at the same time, they still play a good brand of basketball.”

It’s hard to take those quotes and not come away with something along the lines of “Draymond Green disappointed Cavs’ opponents going down easily.” Yes, Green says that the Cavs are playing good basketball, and that quote’s included, but there’s no way that should be a headline; it’s so self-evident that it’s up there with “Area man says water is wet.” What’s interesting in those quotes is Green’s assertion that he thought the Cavs’ opponents “would compete a little harder,” as well as his comment that their opponents are doing something else other than playing good basketball. That’s not sensationalism in headlines; that’s an accurate description of Green’s comments.

It is understandable why Green’s frustrated here, though. Those comments he tossed off Monday wound up going well beyond that ESPN piece, being picked up by countless other media outlets and debated on First Take and Undisputed. Here’s what Stephen A. Smith said on First Take:

And what Skip Bayless and Shannon Sharpe said on FS1’s Undisputed:

So, for sure, when something gets picked up by the debate shows, it’s probably going to be slightly taken out of context and made into a bigger deal than it is. (Really, Undisputed spent almost 10 minutes on this. How is this worth 10 minutes?) And along those lines, Green isn’t wrong that elements of ESPN’s programming (especially First Take) and their competitors (especially Undisputed) are absolutely hunting controversy, and in a manner not dissimilar from reality television. There’s a reason we round up the top ridiculous takes each week, many of which come from those two shows. But Green is painting all of ESPN with the wrong brush here; Haynes’ initial story was fair, included his whole comments, and had a reasonable headline (it may not be one Green liked, but it accurately reflected what was newsworthy in that story). Maybe he’s complaining more about First Take than about the initial report, and that’s fair, but that’s not all of ESPN.

Green is entitled to not like the way people have run with these comments, but that was entirely foreseeable. He should have known that saying anything about Cleveland’s opposition was going to be sports-talk fodder, and the comments he made were pretty insulting to the Cavaliers’ opponents and were always going to create a stir. There’s nothing at all wrong with him expressing his opinion on this, but that’s a choice that does come with this kind of backlash. If he didn’t want that kind of reaction, he shouldn’t have made those comments in the first place. Green can bash ESPN all he wants, but they’re not fabricating the story here; they’re reporting newsworthy comments he made accurately, and those are then being passed around the spin cycle.