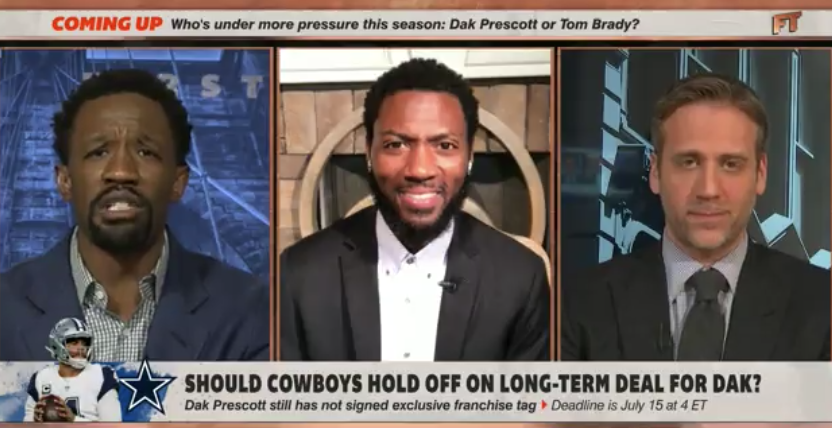 First Take is a show on ESPN that people watch. Usually Stephen A Smith and Max Kellerman bicker back and forth about various sports topics, causing viewers to adjust the volume on their televisions, but today we had a guest bickerer in Domonique Foxworth.

With not a lot of low hanging fruit to debate thanks to the lack of sports, the show decided to run back the 50th installment of analyzing Dak Prescott’s stalled contract negotiations with the Cowboys. As expected, that drifted into some type of argument about Dak Prescott vs. Patrick Mahomes. Foxworth did not believe this was a debate worthy of a sports debate show as prestigious as First Take, and quickly moved to find a more worthy debate topic tangential to Dak Prescott. While viewers probably appreciated the nixing of such a dumb debate, Foxworth didn’t navigate that transition very well, as he brought Dak Prescott’s mother into the discussion.

However, Prescott’s mother passed away from cancer in 2013 making the comment quite awkward for all involved.

An awkward moment on First Take as Domonique Foxworth casually mentions Dak Prescott's mom during a debate about his contract negotiations. She passed away in 2013 from cancer. pic.twitter.com/xBFMck2Vgf

Foxworth didn’t mean any harm with the comment, and it’s easy to see how in the moment such a comment could be made without malice. That said, Prescott is a high profile player whose family tragedies have been repeatedly profiled and reported. While it’s a bit surprising Foxworth was unaware that Prescott’s mother had passed away, it’s probably a broadcasting best practice to not assume parents are both alive.

While we often mock the idea of debate and sports talk radio shows that last two or three hours apiece, there is an art and science in keeping viewers engaged and avoiding moments like this. I imagine Foxworth could end up addressing this further, and will learn that it’s not wise to mention the families of players without knowing the full background of the situation.