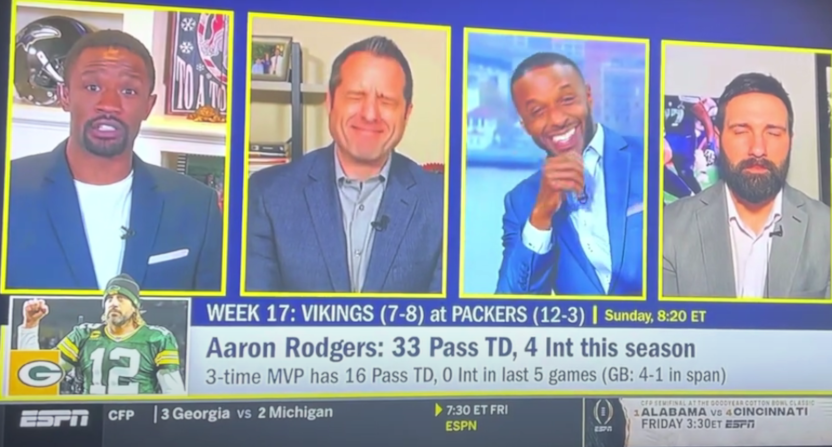 The weekly news cycle around Green Bay Packers’ quarterback Aaron Rodgers sees Rodgers appear on Pat McAfee’s show to get out his opinions unchallenged (something McAfee is fine with), then the rest of the world discuss whatever outrageous things he’s said this time. However, that discussion wound up in some stronger terms than normal on ESPN’s Get Up Wednesday, where ESPN NFL analyst Domonique Foxworth had some notable criticisms of Rodgers, especially when it came to Rodgers’ latest complaints that “If you can’t question science, it’s propaganda,” further advocacy for ivermectin, claims that vaccines don’t work because of breakthrough cases, and screeds against the NFL’s “two-tier system” for vaccinated and unvaccinated players.

Interestingly enough, ESPN posted the clip of Foxworth’s discussion of Rodgers’ on-field complaints about the Packers and general manager Brian Gutekunst to their YouTube channel (albeit with Foxworth’s name spelled wrong). But the network didn’t post the maybe more notable clip of Foxworth going off on Rodgers’ vaccine claims. Fortunately, Jim Burggraf posted that to his own YouTube channel. Here are those two clips; first, Burggraf’s clip of Foxworth (seen at left in the screengrab above), which included Foxworth comparing Rodgers to Jon Hamm’s character Drew Baird on 30 Rock (a character who lives in a “bubble” created by his good looks, which has led him to be a doctor despite being unable to perform the Heimlich maneuver). That which caused the rest of the panel to crack up, as shown in that above screengrab. Foxworth also went after Rodgers for his comments criticizing the scientific research on vaccines.

A transcription of Foxworth’s comments from that first clip:

“He’s a really good quarterback, you can’t argue that point. I don’t know if you guys watched 30 Rock, but there was the “The Bubble” episode where Jon Hamm was so handsome that he could do or say anything and everyone pretended like it made sense. Like, Aaron Rodgers throwing the ball, it is so handsome, and he thinks that he can say or do anything. It’s at the point where we start to believe that maybe Brian Gutekunst has failed him. But in actuality, no!”

“Brian Gutekunst has loaded that defense with players. He’s protected Aaron Rodgers with a great offensive line. He’s got A.J. Dillon, a running attack that supports Aaron Rodgers. He’s got Aaron Rodgers a true No. 1 receiver, not No. 1 on the team, No. 1 in the league. All this is happening and he’s still like ‘Nah, I’m good, because you drafted that quarterback one time and it hurt my feelings, and you let one of my slot receivers go one time. We’ve got to get Randall Cobb back.’ Like, it seems kind of outrageous.”

“This, combined with the misinformation that he’s putting out, it just feels like he has this victim complex, that he wants everyone to feel sorry for him. He’s like ‘No, everyone’s jumping down my throat because I said something that was vastly against science and dangerous! Why are you so mean to me?! I just want to have a debate! Oh, this team won’t do all the things that I want! Why are you so mean to me, why do you treat me so bad?'”

“You are not the victim, Aaron Rodgers! You are possibly the best quarterback we’ve seen. You’ve won a Super Bowl, tons of MVP awards. Stop trying to feel sorry for yourself, because we’re not going to. And if you want to hear something or read something about COVID, here’s plenty of stuff. Do not go to a podcaster for your COVID research information, and then spew it out and have people believe it only because you throw a football really, really well, Jon Hamm! Chill out, Jon Hamm! Go throw a football really well, and if you want to get involved in this stuff, learn about it!”

“And don’t complain when people come down on you. Because you are challenging widely-accepted scientific beliefs. When you do that, you get a lot of backlash. If you think you’re right, that’s fine! You think you’re Copernicus [who formulated a heliocentric universe model in contrast to church teachings], go ahead! You are the first to say that it’s a real different world, go ahead. I guarantee that Copernicus got ridiculed. It’s going to happen. You’re going to get a couple mean tweets when you tell people that you’re not so sure about getting the vaccine.”

“And no one’s mad at you about not getting the vaccine. You can choose to not get vaccinated. But then follow the protocols. Stand up and take that heat. Cole Beasley did it. Carson Wentz did it. [Kirk] Cousins did it. That is something you can choose to do. People are mad at you because you lied about it and forced them to put themselves at risk without giving them that information. That is the problem. Stop pretending like everyone’s all coming down on you because you dared to think outside the box, you dared to think for yourself. Fine, think for yourself! But be honest while you’re doing so. And no one is going to feel sorry for you, so stop whining to whoever you whine about that.”‘

For reference, here’s some of the 30 Rock episode Foxworth was referring to, including Calvin Klein asking Hamm’s character to be an underwear model:

The second clip above, the one that ESPN actually put out, is also worth a watch, but it focuses more on Foxworth discussing the Packers’ on-field situation, the moves Gutekunst has made, and where Rodgers might go next year. It’s that first three minutes of Foxworth going off on Rodgers, including over his vaccine comments, that’s particularly notable, though. There’s been some criticism of Rodgers’ vaccine comments before, including from Stephen A. Smith (who actually called for a suspension, stronger than anything Foxworth says here, but then still got criticized by Jay Williams for not yelling enough about it), but it’s interesting to see that continuing in strong terms. And with an unflattering 30 Rock analogy, to boot.