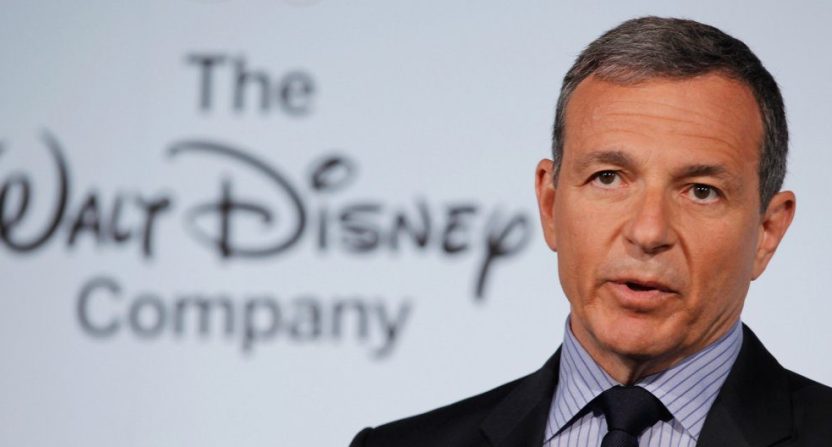 One of the recurring comments around Disney as a company over much of the last decade has been about the idea of them spinning off or selling ESPN. This was particularly notable around the repeated stock hits they took in 2015 and 2016, with ESPN costs and the rise of cord-cutting often cited there in both corporate earnings discussions and analysts’ questions and notes. And that talk is now back (but not in pog form).

A lot has changed since 2015 on the corporate front. For a couple things, there’s Disney’s 2017-announced and 2018-completed purchase of many Fox assets (but subsequent Justice Department-forced sale of the regional sports networks to Sinclair in 2019), and their 2018 launch of ESPN+ and 2019 launch of the ACC Network. On the executive front, ESPN has undergone major change, including John Skipper’s late-2017 resignation, Jimmy Pitaro’s 2018 hiring, and the exits since then of executives including Marie Donoghue, Ed Erhardt, Kevin Merida, Connor Schell, Libby Geist, and others.

And Disney itself has undergone huge leadership change over that span. The company promoted Bob Chapek promoted to CEO early in 2020, with long-time CEO Bob Iger (seen above in 2012) shifting to an executive chairman role in early 2020 (while still reportedly retaining significant influence during the pandemic). Iger then left entirely at the end of 2021 before a surprise return last month. Through all of that ESPN and Disney change, there was still some talk of a potential ESPN spinoff, but the company adamantly denied that was in the works last fall. Following the recent return of Iger, though, Wells Fargo analyst Steven Cahall again raised spinoff talk in a note to clients Tuesday. Here’s the key part of Georg Szalai’s Hollywood Reporter piece on that:

“We think Bob Iger is returning to Disney to make big changes. Spinning [off] ESPN/ABC is the best path forward, and we see it as a reasonably probable late-’23 event.” Wells Fargo analyst Steven Cahall opened a Tuesday report on The Walt Disney Co., led again by Iger as CEO, with a big call that is certain to cause debate.

…In the near term, Cahall expects Iger and his team to focus on content and cost rationalization. “However, over the longer term, we expect a deeper think on portfolio reshaping. Recall that Iger built Disney into what it is today: a franchise IP leader with global scale. ESPN, traditionally the cash cow, is neither owned-IP nor global the way the rest of Disney is. With linear and sports trends diverging from core IP, we think severing the company is increasingly logical.”

Separating ESPN and ABC “would leave remaining Disney as an attractive pureplay IP company,” the Wells Fargo expert emphasized. “We also think investors are increasingly put off by trying to determine how fast linear networks — most of which is ESPN/ABC — is declining as direct-to-consumer (DTC) profits improve. The seesaw creates a constant headache. Spinning ESPN/ABC provides price discovery for the asset at a Fox-esque multiple of 6-7 times enterprise value/earnings before interest, taxes, depreciation and amortization (EBITDA), and then lets remaining Disney be more of a pureplay on global IP and streaming.”

Jim Cramer and David Faber talked about this on CNBC Tuesday afternoon, and offered some support for the idea (as transcribed by Luke Kane at Mediaite):

“They could send a lot of debt with ESPN,” Faber said to Cramer. “Help their balance sheet a lot.”

…“We watch ESPN, like last night you watch ESPN football and realized they have not fully used their library,” Cramer added. “I think they themselves have reduced cost at a phenomenal rate since Bob ran DIS last time. I like the idea.”

“Again, just cause it’s a paper from an analyst doesn’t mean in any way that it’s something Iger is thinking about seriously,” Faber continued. “Just don’t know, but by the way, if they are, they’ll also be some potential buyers then; you may not want to just spin that thing cold.”

One thing that’s notable here is that Cahill’s initial note here wasn’t necessarily a prediction of a sale, just a spinoff. Some spinoffs absolutely get bought by other companies, the way Fox’s entertainment business did by Disney. But many do not change majority control, including AT&T’s spinoff of DirecTV (they sold 30 percent to TPG, but still own 70 percent of that spinoff), and some even wind up back together (including ViacomCBS, now Paramount Global). A spinoff from a perspective of separating different businesses and assets can have some advantages.

That kind of spinoff could allow Disney investors who are bearish on U.S. linear TV to invest in a linear-divested and globally-focused Disney (and to not complain about ESPN/ABC/other U.S. linear networks that might wind up in this division dragging down profits and forecasts). Meanwhile, those higher on linear TV (especially sports) and concerned about streaming content costs/the parks business/consumer products or anything else could invest in the new spinoff. So that possibly widens the pool of those eager to invest in Disney. And if this was done in a way where Disney still kept majority control of the spinoff and still preserved many of the ties between the entities, some of the advantages ESPN and ABC gain from Disney’s scale might still be maintained. As Faber goes on to say there, though, even a spinoff done with the intention of keeping control might bring in notable outside bids.

But there’s still a lot of questions on if Disney would ever try this. And those advantages and ties between Disney and ESPN remain a large challenge in any kind of sale or spinoff, especially considering how this situation has changed since the 2015-16 spinoff talk. ESPN has a significant standalone streaming service business now with ESPN+, and that’s closely linked to (and getting many subscribers from) Disney’s other Hulu and Disney+ streaming services thanks to Disney’s bundle. And Disney owns two-thirds of Hulu (and is expected to buy the other third from Comcast by 2024), and Hulu benefits from ABC content, and from other Disney content, and even from some sports deals now. And while there are certainly significant costs around ESPN and ABC, there’s also still quite a bit of income there from linear ESPN subscription fees, and owned-and-operated ABC retransmission fees and affiliate fees, and advertising on those networks, and now ESPN+ money. It’s not an easy carveout.

At the moment, this looks like mostly an idea to keep tabs on. Spinning off ESPN and ABC would be a complicated process, and there haven’t been a lot of indications to date that it’s being seriously considered inside Disney. And Iger himself has been viewed as someone likely to keep Disney/ESPN largely on course, both now and then (which makes sense, considering how much of that course he was involved in setting). And while he’s talked up ESPN’s streaming moves, he hasn’t yet gone to the aggressive approach of offering full linear ESPN over-the-top (which Cahall projects as something that would need to happen first here), which would likely boost their streaming side but hurt their remaining linear business. Iger has been known to take some bold swings from time to time, though, including that Fox deal. And an ESPN/ABC spinoff would certainly be one. We’ll keep an eye on this to see if it remains an analyst theory or if it gains some traction inside Disney.