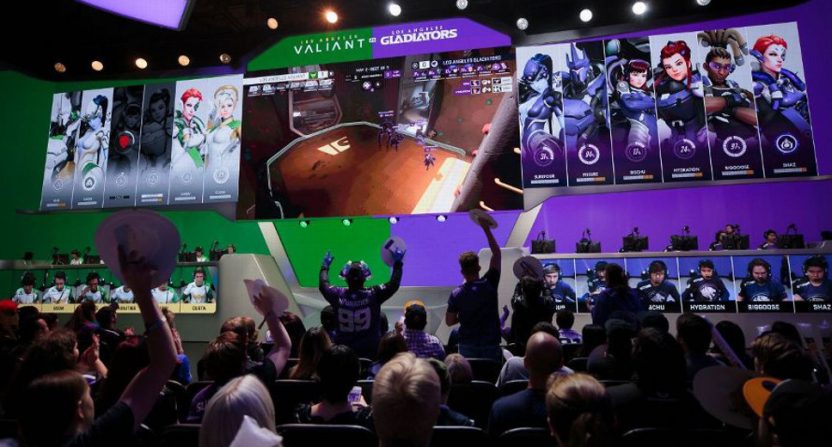 ESPN has gained multi-year broadcast rights to one of the biggest esports properties out there. The network has done esports broadcasts in the past, from Heroes of the Dorm through the Street Fighter V World Championships and sports properties like FIFA and Madden, but corporate parent Disney’s new deal with Activision Blizzard to pick up extensive rights to Overwatch League for the next several years feels like a big step.

After a couple of years of preparation, Overwatch League began play in January with 12 teams representing different cities in the U.S., the United Kingdom, South Korea, and China, $20 million franchise fees, and ownership groups involving NFL figures like Robert Kraft and Stan Kroenke, plus Comcast and a Mets’ sister company. The broadcasts so far have been on Twitch and (the Activision Blizzard-owned) Major League Gaming’s mlg.tv, and they’ve drawn excellent numbers, including a per-minute audience of 408,000 viewers for opening day  (above Amazon’s Thursday Night Football streaming numbers, albeit with some caveats) and over 10 million unique users across the first week.

The existing streaming broadcasts will continue after this deal too, but beginning with this week’s Season 1 playoffs, Disney and ESPN properties will also be broadcasting Overwatch League, from live action to recap shows to perhaps highlight packages or supplemental content aimed at new fans. And as per quotes from an unbylined ESPN.com post on this, both sides are pretty excited about what this deal represents:

“We are turning the corner here in terms of our interest and engagement in the esports category,” ESPN Vice President of Digital Media Programming John Lasker said. “We’ve had an interest and have been watching pretty closely how the first year of the Overwatch League has been progressing, and we’re really excited to be a part of this. Clearly by the way we’re going to be covering it starting with the playoffs and the finals this year certainly speaks volumes to our excitement and our enthusiasm overall for esports moving forward.”

…”It’s a cross section that’s a hardcore sports fan, especially on ESPN channels,” Pete Vlastelica, president and CEO of Activision Blizzard esports leagues, said. “They love watching competition, they love watching the best in the world compete at a great game. Maybe they have played video games. Maybe they know of Overwatch. Maybe they even play Overwatch or play it a lot. But they’re fundamentally looking to be entertained by the highest possible level of competition around a great game. And that’s what we’ve got.”

…”We’ve been in partnership with Blizzard for a long time, and we’re rather ecstatic about taking this significant step forward,” Lasker said.

For the immediate moment, that’s going to lead to quite a bit of coverage of the Overwatch League playoffs, which begin Wednesday with quarterfinals at 8 p.m. and 10 p.m. Eastern. Those will be carried on Disney XD and ESPN3, as will the second and third days of quarterfinals Friday and Saturday (at 8 p.m. and 4 p.m. Eastern respectively). Next week, the first day of semifinals Wednesday will air on Disney XD and ESPN3 (again at 8 p.m. and 10 p.m. Eastern), but Friday and Saturday’s Day 2 and 3 of semifinals will air on ESPNEWS and ESPN2 respectively (both at 7 p.m. Eastern).

We’ll see how this winds up performing for ESPN, and what sort of placement Overwatch League winds up with going forward. While many networks have gotten into esports broadcasting, the viewership numbers on conventional TV haven’t always been great, and much of the audience perhaps is used to and/or prefers the digital streams. But Overwatch League is certainly an esports property that’s attracted a lot of buzz and viewership on digital platforms so far, and it’s one that might be a good fit for ESPN. This will be a deal to keep an eye on.