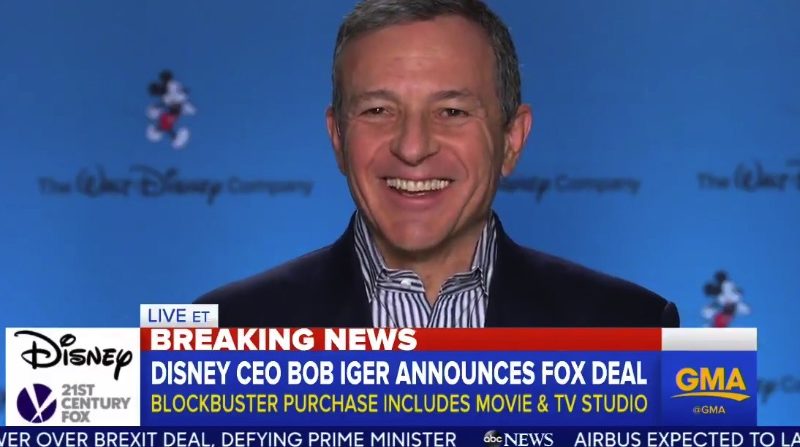 Disney’s long-rumored purchase of 21st Century Fox was officially announced Thursday morning, opening up a wealth of possibilities with content and technology for the conglomerate’s many properties, including ESPN, ABC and movie franchises such as Marvel and Star Wars.

The acquisition, an all-stock transaction, is valued at $52.4 billion, according to reports. That will include the 20th Century Fox movie studio (which includes the original Star Wars films and several Marvel characters such as the X-Men and Fantastic Four), the Fox television studio, and cable networks such as FX and National Geographic.

Also included in the purchase are international television networks Sky of Britain and Star of India, which gives Disney access to several sports such as to boxing, cricket, darts and Formula One racing, as Awful Announcing’s Ken Fang explained in a previous article.

Disney also announced the official launch of ESPN’s over-the-top streaming service in 2018, and a 30 percent stake in streaming provider Hulu, which offers live sports as part of its service — including Fox, FS1 and properties such as Big Ten Network. How that will affect channels belonging to other companies such as NBC, NBCSN, Golf Channel, TNT, CBS and CBS Sports Network has yet to be explained.

CEO Bob Iger appeared on Good Morning America to explain and promote the acquisition and what it will mean for consumers in the very near future.

You can watch the full interview here:

Disney Chairman and CEO Bob Iger says he’s going to stay with Disney until the end of 2021 after announcing Disney will acquire 21st Century Fox: “I’ve got one of the greatest jobs in the world…this combination makes it even more exciting.” pic.twitter.com/HrPi8pPg54

“I think it’s pretty clear that consumers want access to entertainment that 1) is high-quality, but 2) they want access pretty much anywhere, any time, anyhow,” Iger explained to GMA‘s George Stephanopoulos. “That requires new technology to be able to deliver in that fashion.

“Hulu certainly provides that, so the controlling stake that we’ll acquire with this acquisition is one way to provide that. Another is the Fox international footprint has some extremely high-end technology delivering all this content to consumers in more modern ways. Sky in Europe is a good example of that, Star India another one.”

Iger further explained what direct-to-consumer products Disney will offer, including the ESPN streaming service, after Stephanopoulos asked if Disney was essentially becoming another Netflix.

“We’ve been in the process of launching a direct-to-consumer service; it’s one of the primary priorities of the company right now,” he said. “We’re going to launch an ESPN direct service in 2018, and a Disney-branded service in 2019. This will jump-start those efforts, give us more content, more producing capabilities for those services.”

In a call with investors, Iger explained more about ESPN Plus, saying it will be accessible through a new, fully redesigned app that includes access to scores, highlights and streaming content for live sporting events.

“This one app experience will be a one-of-a-kind product,” said Iger, “offering sports fans far more than they can get on any other app, website or channel and immediately propelling ESPN in the new direction.”

Iger also confirmed that he would be staying on as Disney CEO through 2021, which he later used to dismiss any notions of possibly running for president in the 2020 election.

The deal still has to be approved by antitrust regulators — which isn’t a formality, considering the roadblocks that the Time Warner-AT&T merger has encountered. But Fox isn’t handing over its entire operation to Disney, holding onto the Fox broadcast network (and its 28 affiliates), FS1 (and FS2), Fox News Channel, Fox Business Channel and Big Ten Network. So that should mitigate any talk of Disney compiling a media and entertainment monopoly.