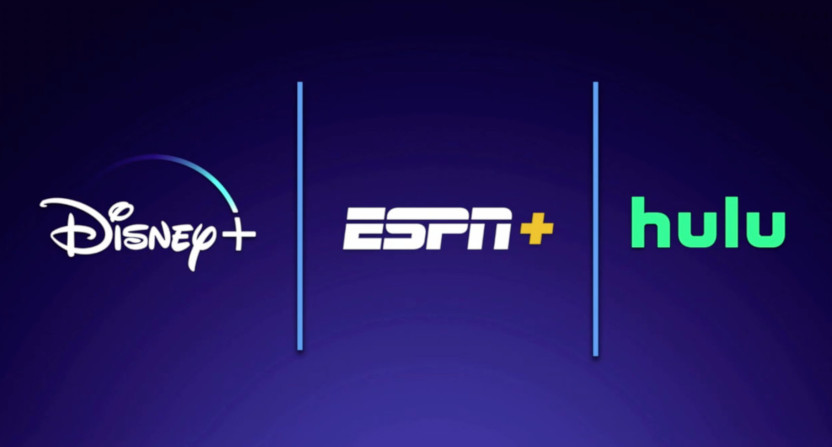 The increasing Disney emphasis on direct-to-consumer streaming services Disney+, ESPN+ and Hulu appears to be paying off pretty well so far. Disney released their numbers (PDF) for the quarter ending Dec. 29 Tuesday, and in addition to large growth for the new Disney+ (which was just launched in November), they also saw big jumps year over year for ESPN+ and Hulu (both the subscription video on demand service and the Hulu+Live TV service). That appears to have a lot to do with the bundle Disney is offering where you can get all three services for $12.99 a month (counting the ad-supported version of Hulu; the ad-free version is available as well, but costs an extra $6 a month). Here are each services’ subscriber numbers, via Axios’ Sara Fischer:

????BREAKING: Disney releases paid subscribers numbers for all of its DTCI streaming services with earnings $DIS

Of course, those are the numbers as of the end of December. Things have continued to climb since then, and Disney CEO Bob Iger released more current numbers on an earnings call later Tuesday:

As per Jess Barnes of Cordcutters News, the 30.7 million number for Hulu counts both SVOD-only and Hulu+Live TV customers, and the latter number is still 3.2 million. Meanwhile, Recode’s Peter Kafka noted that the Disney+ number also grew in January:

Add another 2 million from January (people get new devices, want things to put on them. Plus, baby Yoda!) Now 28.6 million. https://t.co/X37AI4J56W

And here’s the average revenue for those services, via Robert Seidman of Sports TV Ratings:

If I'd have paid more attention in Algebra I think I could figure out how many subs ESPN+ got as a result of the Disney+/Hulu/ESPN+ bundle. pic.twitter.com/oxcxM71Y66

Kevin Draper of The New York Times has a graph showing the ESPN+ numbers over time, and yes, almost half of the current subscribers added it after November (when Disney+ and the bundle both went online):

Bob Iger said on the results conference call that ESPN+ is up to 7.6 million subs, so let’s edit the graph again. Also said around 1 million people purchased the McGregor-Cerrone fight. pic.twitter.com/c6xhBrPeGA

That further speaks to the importance of Disney+, Hulu, and the bundle to ESPN+. Yes, ESPN+ has picked up a lot of content, and there are quite a few leagues featuring content exclusively there. But it hasn’t always been an easy sell as a standalone service, especially one to keep year-round; if you’re only subscribing to ESPN+ for a particular team, there’s some logic in cancelling during the offseason and then coming back. With the $12.99 a month bundle, though, ESPN+ is practically a free throw-in if you’re already buying Disney+ ($6.99/month on its own) and Hulu ($5.99 a month on its own for the ad-supported option), so there’s a good case for the bundle if you want the other two services. (Of course, we don’t know everyone’s priorities, and some people undoubtedly subscribed to ESPN+ and Disney+ first and view Hulu as the throw-in.)

It should be noted that the boost in subscriber numbers here is very useful for ESPN+, especially when it comes to talking up their reach to leagues. Yes, quite a few leagues have already signed on with them, but there’s still a lot of reluctance from many to go to a streaming-heavy option. (And there’s logic to that, especially with the continuing challenges of getting reliable broadband internet in rural areas.) But ESPN+ now has more than double the subscribers it had back in November, and that makes it a more known and more reasonable place to put content, even if a lot of those subscribers may have only come in through the bundle and may not be that interested in what ESPN+ has.

What about the revenue? Well, multiplying those average revenues per subscriber by the number of subscribers produces the following results for the December numbers:

And for the current numbers (still using the December numbers on price-per-subscriber):

That $786.8 million a month currently would be $9.44 billion over the course of a year, which is pretty massive even for a company like Disney. Disney recorded $69.6 billion in annual revenues for fiscal 2019 (their fiscal year ended Sept. 28, 2019, which is why the Sept. 29-Dec. 29 period is Q1 of 2020), so $9.4 billion would be 13.5 percent of that. And it’s notable that the whole direct-to-consumer and international division brought in $9.35 billion in revenue last year, so the DTC side alone would exceed that with this projection, with a lot of international revenue to be tacked on. The Q1 earnings results have that combined division making $3.99 billion in revenue, so that would be $15.96 billion over the course of the year if multiplied by four, representing 22.9 percent of all the revenue Disney made last year. So this is quite an important part of the company.

Of course, that’s revenue, not profit; Disney is spending a lot of money on content for these various services. And the DTCI division posted operating income of -1.8 billion for fiscal year 2019, and -693 million for Q1 2020, so they’re not making back what they’re spending yet. But it’s logical for them to invest in direct-to-consumer services, especially with cord-cutting continuing to be a significant factor. And it’s worth keeping in mind that Disney+ is still just a couple of months old, and that they had to spend a lot on developing content for it long before they made any revenue from it. Disney+, ESPN+ and Hulu also give Disney flexibility regardless of what the cord-cutting future looks like, and if there ever is a need to offer channels like ESPN fully over the top, they now have a structure in place that could support that.

The key takeaways from this particular report are about the growth of Disney+ and ESPN+, though, especially the latter. That suggests the bundling approach is working, and it’s making ESPN+ a much more significant player. It’s still small compared to corporate brethren Disney+ and Hulu, but it’s on the upswing for now. We’ll see if that continues going forward.