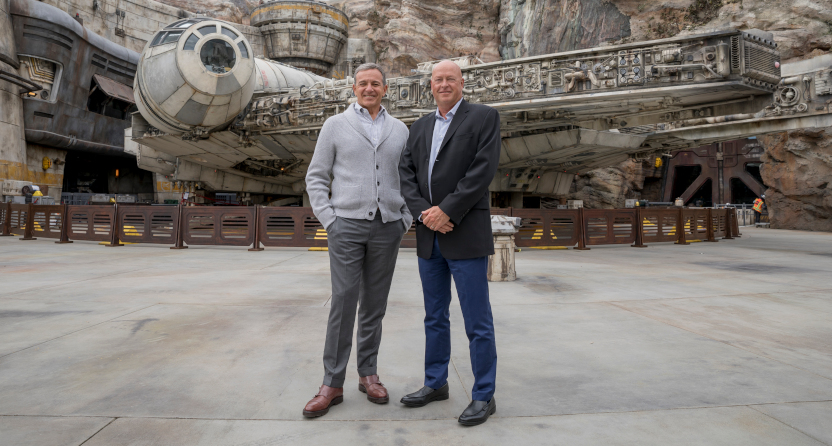 Disney has been looking for a successor for CEO Bob Iger for quite some time, and they’ve now named Bob Chapek (most recently the company’s chairman of parks, experiences and products) to fill that role. Iger (seen at left above at the opening of Star Wars: Galaxy’s Edge in Disneyland) has been Disney’s CEO since 2005 and was first set to step down in 2016, then 2018, then 2019. Following the Disney-Fox sale, though, Iger signed a further extension through 2021. He’ll now be serving as executive chairman (where, as per Disney’s release, he will “direct the Company’s creative endeavors, while leading the Board and providing the full benefit of his experience, leadership and guidance to ensure a smooth and successful transition through the end of his contract on Dec. 31, 2021,”) with Chapek (seen at right above) taking over as CEO.

“With the successful launch of Disney’s direct-to-consumer businesses and the integration of Twenty-First Century Fox well underway, I believe this is the optimal time to transition to a new CEO,” Mr. Iger said. “I have the utmost confidence in Bob and look forward to working closely with him over the next 22 months as he assumes this new role and delves deeper into Disney’s multifaceted global businesses and operations, while I continue to focus on the Company’s creative endeavors.”

Mr. Iger added: “Bob will be the seventh CEO in Disney’s nearly 100-year history, and he has proven himself exceptionally qualified to lead the Company into its next century. Throughout his career, Bob has led with integrity and conviction, always respecting Disney’s rich legacy while at the same time taking smart, innovative risks for the future. His success over the past 27 years reflects his visionary leadership and the strong business growth and stellar results he has consistently achieved in his roles at Parks, Consumer Products and the Studio. Under Bob’s leadership as CEO, our portfolio of great businesses and our amazing and talented people will continue to serve the Company and its shareholders well for years to come.”

“I am incredibly honored and humbled to assume the role of CEO of what I truly believe is the greatest company in the world, and to lead our exceptionally talented and dedicated cast members and employees,” Mr. Chapek said. “Bob Iger has built Disney into the most admired and successful media and entertainment company, and I have been lucky to enjoy a front-row seat as a member of his leadership team. I share his commitment to creative excellence, technological innovation and international expansion, and I will continue to embrace these same strategic pillars going forward. Everything we have achieved thus far serves as a solid foundation for further creative storytelling, bold innovation and thoughtful risk-taking.”

The release also notes that Chapek will report to Iger and to the board, and will be named to the board at a later time. So Iger will still be playing an important role until his departure at the end of 2021. But this announcement is notable both for the immediate future (Chapek will certainly be able to start putting some of his own stamp on things even before Iger leaves), and for the long-term future, as we now know who Disney plans to have at the helm post-Iger. (There had been a lot of people suggested as possible successors, including direct-to-consumer and international chairman Kevin Mayer, so it was far from certain that Chapek would be picked here.)

As for impacts on ESPN, those aren’t clear at the moment, especially as Chapek hasn’t had a lot of direct involvement there in the past. But the strategic shift towards emphasizing ESPN+ (especially in the bundle with Disney+ and Hulu, which is proving quite popular) seems likely to continue, as that’s both a big Iger initiative and one that seems to be making some headway. We’ll see what, if any, changes Chapek brings to ESPN, but now at least we know who’s going to be leading Disney after Iger.