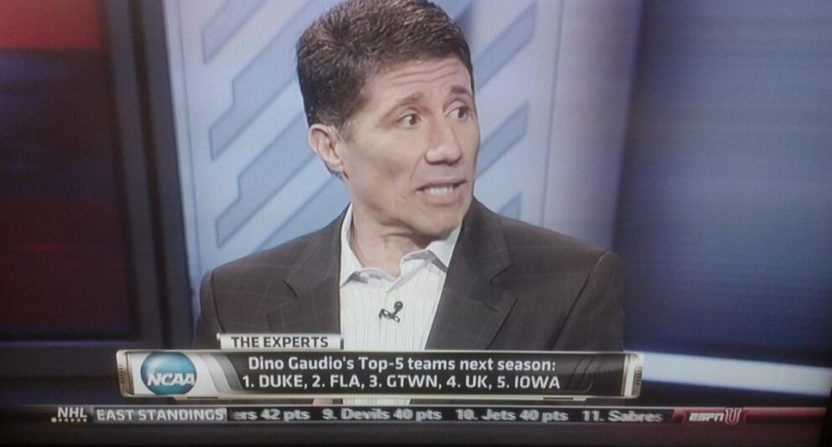 Plenty of analysts come from the coaching ranks and return to the coaching ranks, and the latest to do so appears to be ESPN college basketball analyst Dino Gaudio. Gaudio was a head coach at Army and Loyola (Maryland) from 1993-2000, then an assistant at Xavier for a year, an assistant at Wake Forest through 2007 and then Wake Forest’s head coach from 2007 through 2010 before heading to ESPN in 2011.

Now, he’s taking a job as an assistant at Louisville on new head coach Chris Mack’s staff, as per Twitter congratulations from ESPN colleagues and Gaudio’s own tweets:

Last time my friend @coachdinogaudio was in @theACC, Wake knocked off UNC & Duke in same year en route to @NCAA Tourney. He’s back with Chris Mack & @LouisvilleMBB. Thrilled for him!

Thanks so much Fran, very appreciative! Looking forward to working with great people, in an excellent city and at one of the top BBall programs in America. @LouisvilleMBB And back in the @accmbb https://t.co/cT9QICAAhw

Gaudio has a long history with Mack; they both worked on Skip Prosser’s staff at Xavier, with Gaudio as a more senior assistant and Mack as director of basketball operations, then followed Prosser to Wake Forest in 2001. Mack went back to Xavier in 2004 as an assistant to Sean Miller, then became Xavier’s head coach when Miller left for Arizona in 2009. Gaudio stayed on at Wake Forest and took over as head coach there following Prosser’s 2007 death, leading the Demon Deacons to a 61-31 overall record in three years and two NCAA Tournament appearances.

So he’s done some impressive coaching work and has worked with Mack before, which may be important considering the challenges for Louisville as they move on from sanctions and from the Rick Pitino era.

Gaudio contributed across a number of ESPN platforms, including ESPNU shows and ESPN Radio. We’ll see how they replace him on their college basketball coverage going forward.

[WDRB; photo from Black Heart Gold Pants, on a 2013-14 prediction from Gaudio that didn’t work out so well]