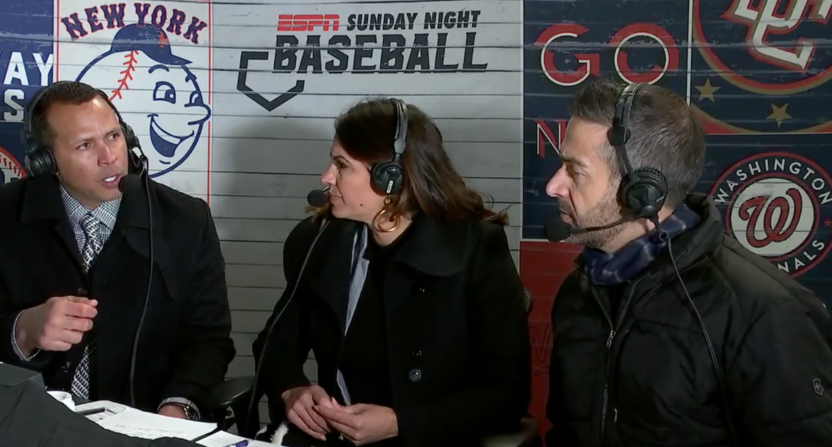 Despite the huge amounts of media outlets out there, lots of the coverage of any particular situation tends to read similarly. But there are occasions where stories on the same topic wind up being quite different in their emphasis, and a pre-game production meeting ahead of Sunday’s installment of ESPN’s Sunday Night Baseball is the latest example of that. That meeting saw Chicago Cubs’ manager Joe Maddon talking with ESPN analyst Alex Rodriguez (seen at left above on an April Sunday Night Baseball broadcast, with fellow analyst Jessica Mendoza and play-by-play broadcaster Matt Vasgersian ) in person for the first time since Rodriguez’s controversial comments about Cubs’ pitcher Yu Darvish two weeks back, which led to blowback from Maddon and from Darvish’s agent. How’d it go? Well, let’s consider just the headlines of two articles on it:

So, some might think it’s one or the other, but it actually seems quite possible that both accounts are accurate. Mooney’s piece says sources told him “A heated​ argument erupted” in the meeting (which had Rodriguez, Mendoza and Vasgersian in Maddon’s office), and it doesn’t seem unlikely that it did; Rodriguez’s comments on Darvish certainly seemed to annoy Maddon, as evidenced by the radio interview Maddon gave about them. But it’s also quite conceivable that the two sides did, in fact, “make peace” by the end of that meeting; the comments by both Maddon and Rodriguez to media afterwards (quoted in both articles) didn’t suggest that either had apologized or changed their stance, but they did seem to show the two moving on. Here’s more from Maddon in Greenstein’s piece:

“Alex and I had a really nice discussion,” Maddon said. “I felt good about it. Hopefully he felt the same. We talked openly about it. Under those circumstances for me, you speak in a candid manner and then you move on. I really believe through that conversation that we have a chance to be pretty good friends.”

And more from Rodriguez in Mooney’s piece:

Would you change anything?

“No, my job is to say it fairly and objectively,” Rodriguez said. “I have over 25 years in the game and I’m going to call it as I see it. We don’t always have to agree on everything. But I do have a lot of respect for Joe — and obviously the Cubs organization — and I have for a long time and that hasn’t changed.

“As a matter of fact — before I go to rehearsal — Joe and I plan to have drinks together. So that’s planned. That’s in the books.”

So both sides seem fine with how this ended, at least publicly. But it’s interesting to see how different the headlines of two articles on the same thing can be, and it’s particularly interesting considering that those feel logical for both articles. Greenstein’s piece doesn’t have the sources saying this was a “heated argument,” so “make peace” seems reasonable from the information he had. Meanwhile, it also feels reasonable for Mooney’s piece to emphasize the unique info it has, namely the sources discussing how this turned “heated” at one point, even if that isn’t necessarily where it ended up. But it is notable how different two articles on this conversation turned out.

[The Chicago Tribune, The Athletic]