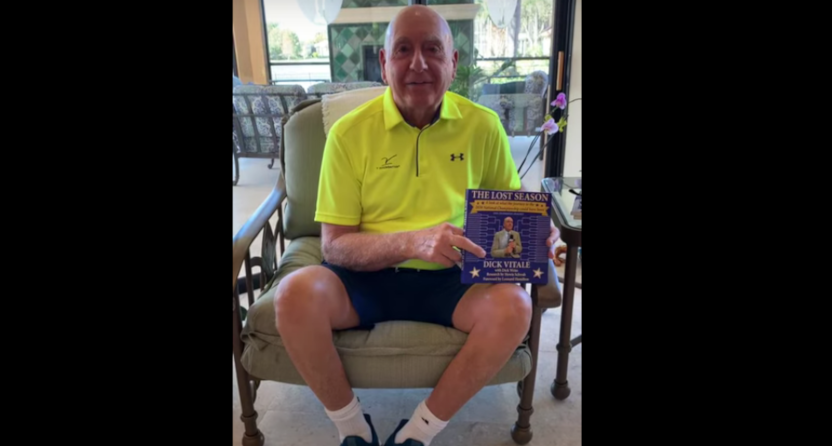 ESPN analyst Dick Vitale has been writing some books recently, and he’s supporting a good cause in the process, sending his author’s proceeds to The V Foundation for pediatric cancer research. In January 2019, Vitale revealed that his “Mount Rushmores of College Basketball” book (co-written with sportswriter Dick Weiss (inducted into the NSMA Hall of Fame in 2018) and stats guru Howie Schwab (previously a long-time colleague of Vitale’s at ESPN) had raised $24,600 for The V Foundation to that point. After the 2020 NCAA tournament wasn’t played thanks to COVID-19, Vitale paired up with Weiss and Schwab for another book, “The Lost Season,” about what might have happened if the tournament had been played, with all proceeds again going to The V Foundation. And Vitale revealed Thursday that he’s raised $29,000 from the book most recently, adding to the $18,700 he’d raised earlier. Here’s his video discussing that:

“See this check? It’s going to The V Foundation, for kids battling cancer, and I can’t thank all of you enough! We’re sending them a check right now for $29,000 in profits from selling this book. All you fans that have replied and responded, I can’t thank you enough. We’ve already sent them $18,700, so that’s $47,700, and we’ve got more to send! So get your copy if you didn’t get one. An autographed copy, just go to DickVitale.com.”

“I did it with the great “Hoops” Weiss, he’s a legend in terms of basketball knowledge, football knowledge. I did it with Hoops, I did it with Howie Schwab, research guru. And I’m telling you, we are so proud of all of you that bought autographied copies and allowed me to send these checks to The V Foundation! $47,000 so far, unbelievable! And we’re going to go higher, I know we are, because you’re not going to let me down. Go to DickVitale.com and get an autographed copy so I can write another check out!”

Here’s more on the book from Vitale’s site:

The end of the 2020 NCAA men’s basketball season was supposed to take place April 6 in Atlanta, Georgia. Over 80,000 fans were expected to attend the NCAA’s annual Final Four at Mercedes-Benz Stadium.

Unfortunately, the massive outbreak of the global coronavirus pandemic put a sudden end to the men’s and women’s tournaments almost a month earlier than expected. The NCAA had no other choice but to cancel March Madness. It was heartbreaking, but no game is more important than the health and safety of everyone involved, and this was one time when sports had to take a back seat to the concerns of public health. My heart goes out to all the players, coaches, and fans who dreamed about being part of this magical three-week experience, and never got the chance.

It’s cool to see Vitale still so pumped up about supporting The V Foundation (a long-time cause for him), and to see him contining to donate his proceeds from these books to that cause.