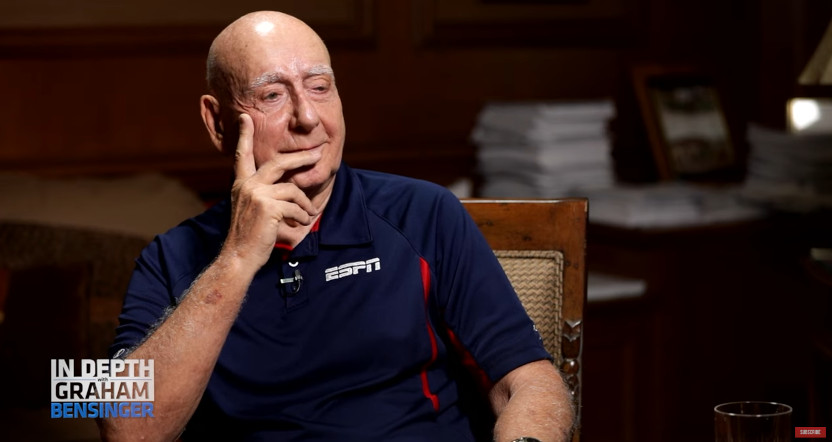 ESPN college basketball analyst Dick Vitale (who’s set to receive the Jimmy V Award for Perseverance at July’s ESPYs) has battled two different severe illnesses this past year, lymphoma and vocal cord dysplasia. Both of those battles are currently going well for him; his most recent cancer scan came up negative, and his vocal cord surgery went well, helping him once again host his annual V Foundation Gala this month (which raised a record $11.1 million). But they both have posed challenges for Vitale, as journalist Graham Bensinger explores in the most recent episode of his syndicated show In Depth With Graham Bensinger, which premieres this weekend (airtimes and stations can be found here).

Bensinger spoke with Vitale, his wife Lorraine and daughter Terri, throat specialist Dr. Steven Zeitels, oncologist Dr. Rick Brown, and more. And one particularly notable clip from that had Vitale and his family speaking about how the voice rest required as part of the treatment for vocal cord dysplasia (which forced him to take time off from his ESPN job and then eventually miss the rest of the college basketball season) felt worse for them, even if it wasn’t as life-threatening as the cancer. Here’s that segment:

Graham Bensinger: I was talking to your oncologist, Dr. Brown. He told me that your lowest point, in his opinion from what he saw during the entire process – the melanoma, lymphoma, vocal cord issues – was not when it was thought you might have bile duct cancer and your days could be numbered, but was rather how he saw you get when you realized you weren’t gonna be able to talk again for a while… Your thoughts?

Lorraine Vitale: That was the hardest for him to deal with because that’s like him not having breath, Dick not talking… And without his voice, it’s like it’s not him.

Terri Vitale: It was such a devastating, emotional blow. Him not being able to engage and not be able to talk and us not knowing the outcome of that – it was definitely the darkest time. I’m not a medical professional, but I’m gonna use the word ‘depressed.’ I would say he was emotionally defeated.

It’s interesting to hear just how hard that was for Vitale, not even just with not calling games but with also being unable to talk in the rest of his life. And that’s certainly challenging. Fortunately, the voice rest and then surgery worked, and Vitale is doing much better now, and is able to return to his charitable work as well. That matters; as he told AA last year, raising money for pediatric cancer research is “the story of my life now.” Here’s what he and Lorraine told Bensinger ahead of this year’s gala on why raising money for children’s cancer research is so important to him:

A full schedule of how and when to watch In Depth With Graham Bensinger can be found here. Further clips from Bensinger’s interview with Vitale can also be seen on his YouTube channel.