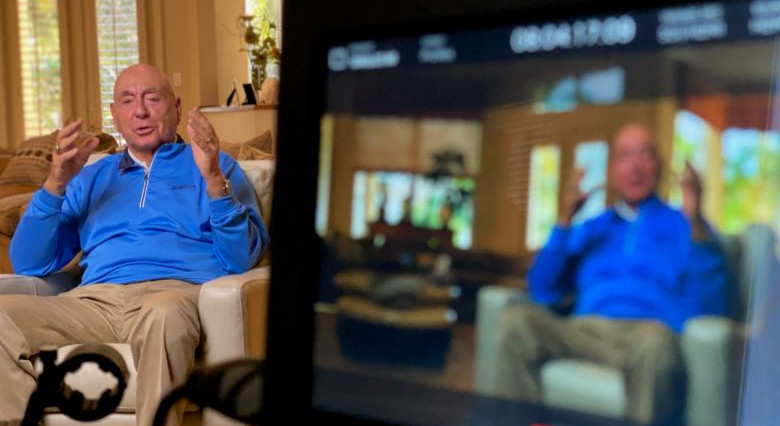 It can be difficult to do a documentary on one of your own. A good one requires a thoughtful examination, showing the highs and lows, pros and cons from an objective point of view. ESPN, of course, knows this very well. The Worldwide Leader in Sports has created some of the best sports documentaries ever made.

If you watch Dickie V expecting to see a comprehensive look at Dick Vitale, ESPN’s longtime voice of college basketball, you’re not necessarily going to get a full picture. However, what you will see is a film that reflects his passion and determination, as well as ESPN’s appreciation for what he’s done for the network since 1979. The 80-minute ESPN Films documentary, directed by Nick Nanton, premieres July 20 on ESPN+ and July 23 on linear ESPN.

Vitale is 83 now. He has battled cancer (melanoma and lymphoma), as well as ulcerated lesions on his vocal cords, which caused him to miss much of the 2021-22 college basketball season. He is expected to speak Wednesday at the ESPYs when he receives the Jimmy V Award For Perseverance.

There’s a moment in Dickie V when he bluntly says: “I’m in the last chapter, man and that chapter is going to be filled with love, love, love for others because people have poured love to me. And I want to give that love back before it’s time for me to say bye-bye.”

Perhaps, Dickie V is intended to be a love letter to him.

Vitale is more than a broadcaster. He’s an American original. At the height of his popularity in the 1990s and 2000s, he was a pop culture sensation, appearing on late-night talk shows and countless commercials. There were Dick Vitale sound-a-like contests. His name even appeared in music, including Kid Rock’s ‘Trippin With Dick Vitale.’

At a time when people didn’t know most college basketball analysts, his voice and mannerisms were immediately recognizable. Even to those who didn’t follow the sport. Through sheer energy (and volume) he was a star with the power to make stars. Social media didn’t exist. If you impressed Vitale, the sports world quickly discovered who you were. If Vitale was at your school’s game, your team mattered.

Dickie V does a strong job of telling Vitale’s origin story, growing up as a child who was blind in one eye to becoming “Richie Vitale” who worked in the accounting department of a plumbing company. That seems about as unglamorous as you can imagine, and Vitale quickly figured out that having a regular job wasn’t for him.

Vitale has been on TV for so long that some may not realize that he was a coach in high school, college, and the NBA. This documentary chronicles his many successes at the amateur level and his failure with the Detroit Pistons.

There’s a reason why Vitale has such a good rapport with coaches like John Calipari, Tom Izzo, and Bruce Pearl. They view him as more of a peer than a media member. An ambassador for college basketball. It’s here where the documentary misses an opportunity.

If HBO had made Dickie V, it likely would have been more nuanced. While Vitale remains popular, he has been the target of criticism throughout his career.  He has been accused of being more of a cheerleader than a critical thinker. He also has been reluctant to evolve his antiquated views of amateurism as a younger generation sees college sports differently.

ESPN and Nanton chose not to address any of this.

Dickie V is also missing youth. Everyone interviewed is old. Jalen Rose might be the youngest person in this documentary, and he’s 49. Given Vitale’s longevity, it would have been interesting to hear what younger athletes, coaches, and fans think of him. What kind of relevance does he hold with them?

Again, this might be a deliberate choice by ESPN.

The best footage in Dickie V gives us an inside look at his health battles. You don’t see a boisterous showman. You see a scared person grappling with the somber realities of having his identity temporarily taken away. Following vocal cord surgery last winter, Vitale wasn’t allowed to speak and was limited to writing down his words. For a broadcaster, not being able to talk is frustrating. Especially one famous for his verbosity.

There’s a touching scene where Vitale is asked what he’s most looking forward to once he can speak again. He writes down “To say I love you to my wife.” Lorraine Vitale, his spouse for 50 years, chuckles and replies “That better be your first words.”

This message is for ALL of u that have asked when I would be cleared to speak . Also for ALL that have sent ???. Just had my examination by Dr Steve Zeitels & he shares here his analysis of my post surgical situation . @jksports @ESPNPR @TheVFoundation pic.twitter.com/86HyDiMJTf

With Dickie V, ESPN is saying “I love you” to Vitale.

“Dickie V” premieres on ESPN+ on Wednesday, July 20. It will premiere on ESPN on Saturday, July 23 at 4 p.m. Eastern.