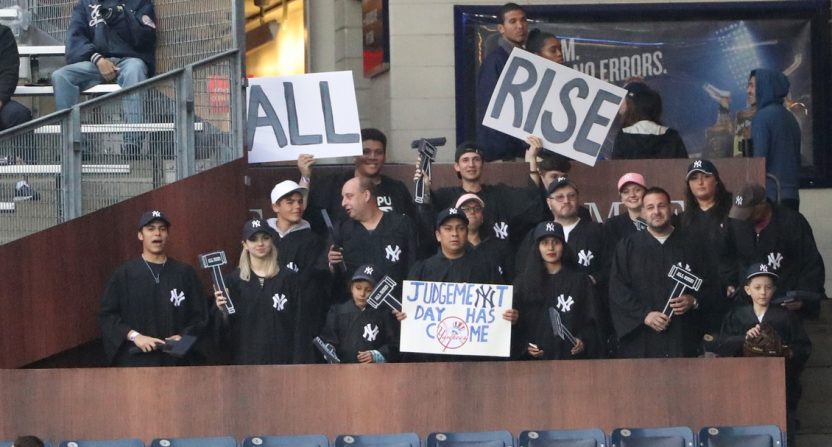 The Yankees and Red Sox are playing this weekend, which means every national window will be occupied by the two teams from Thursday to Sunday (MLB Network on both Thursday and Friday, Fox on Saturday, ESPN on Sunday), to the shock of absolutely no one. But ESPN is adding a twist to their Sunday Night Baseball broadcast, apparently aimed at making the insufferable Yanks-Sox marathon broadcast even more unbearable.

The Sunday Night Baseball crew of Matt Vasgersian, Jessica Mendoza, and Alex Rodriguez will be calling the game from Yankee Stadium’s Judge’s Chambers in the outfield. This is not the first time the crew has called a game from the crowd this season (the April 28th Indians-Astros game at Minute Maid Park was called from the Crawford Boxes), but it’s the first time that I can remember that a network has decided Yanks-Sox needed yet another twist and should be called from the stands.

(also, I can’t ever recall broadcasters planting themselves in the Judge’s Chambers, mostly because they’ve only been a thing since 2017 and that Judge missed a decent chunk of time in 2018)

At this point, Sunday Night Baseball is what it is. If the booth is improving, it’s only improving in small enough increments that no one is noticing or caring. If it’s getting worse, no one is really noticing or caring because the bar was already set so low. A year and two plus months into this booth’s tenure, no one’s opinion is going to change, no matter what gimmicks ESPN slaps onto the trio of Vasgersian, Mendoza, and Rodriguez.

ESPN is doing the threesome no favors by putting them in the outfield for this game. Yankees-Red Sox is always a great ratings draw for MLB (especially in the Postseason), despite fatigue of the matchup from fans of 28 other teams and the utter predictability of the series getting plum national timeslots. Taking a game that draws more viewers than most of the others on ESPN’s national schedule and turning it into an “alternative” broadcast is only going to piss off even more fans and draw more ire to the booth, no matter how good or bad the actual broadcast is.

I get it. It’s a long season, and networks need to make broadcasts more interesting (especially if we’re talking about an RSN airing 150+ games). But ESPN opting to “innovate” with one of their bread and butter matchups, MLB’s one guaranteed ratings draw, is absurd, especially when we’re talking about a “unique location” that’s been a thing for a little over two seasons. This isn’t the Green Monster. This isn’t the Wrigley bleachers. Hell, this isn’t even the Crawford Boxes!

But hey, there’s a bright side about this: ESPN still has four (FOUR!) more Yankees-Red Sox games on Sunday Night Baseball this season after this weekend’s contest, including one game airing in the morning from London. Hopefully, those three second half matchups will be gimmick-free and we can complain about the matchup based on its merits and the frequency of the rivalry on national TV instead unnecessary bells and whistles.