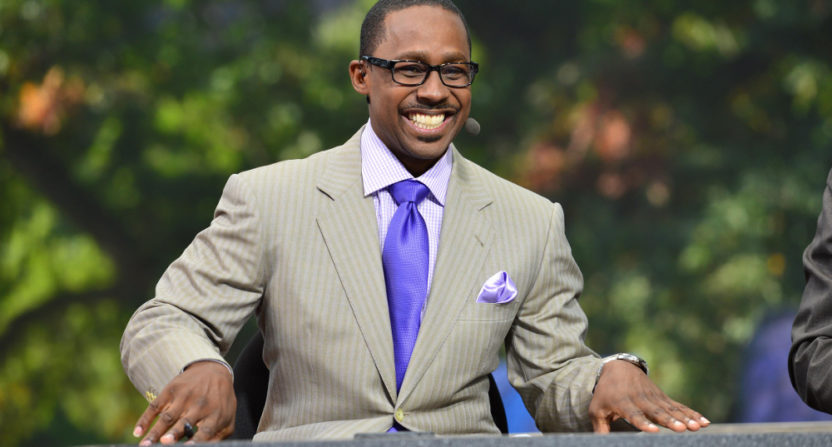 It looks like Desmond Howard will be at ESPN for some time to come, and that he’ll be doing some new things with the company. ESPN announced Tuesday that Howard had signed a multi-year extension to remain with the network, and mentioned that in addition to his regular role on College GameDay on Saturdays and College Football Live during the week, he’ll now be an analyst on some selected mid-week games. MLive’s Josh Slagter says those mid-week games will be in November. Here are some quotes about Howard from his GameDay teammates, via the ESPN release:

“The name Desmond Howard is synonymous with college football,” said Lee Fitting, ESPN senior coordinating producer. “Desmond has been a key part of our College GameDay family for over 10 years, and will be into the foreseeable future. Desmond has established himself as a respected analyst, and know he is going to continue to deliver honest and thoughtful opinions elevating our college football coverage.”

Howard is joined each week on GameDay by host Rece Davis, along with analysts Lee Corso, Kirk Herbstreit and David Pollack.

“Desmond was obviously a great player and has taken that same flair, style and fearlessness to College GameDay,” said Davis. “Desmond is thoughtful, energetic and never shies away from taking strong stands on issues surrounding the game, and it is that type of honesty and candor that resonates with fans and makes our show better. He has become one of the most respected voices in the game, and I value him greatly as a friend and teammate.”

“I am beyond thrilled that Des is returning to our College GameDay family,” said Herbstreit. “He continues to grow as an analyst and works hard to be dialed in on the subject matters each week. We are fired up that he is back on the desk with the team!”

Howard has been on GameDay since coming to ESPN in 2005. Keeping him around provides some further stability for the show, which is one of the network’s most important non-game properties. And it’s interesting that he’s going to start calling a few games as well. Most mid-week action is from less high-profile conferences, so it’s a good learning area, and it shouldn’t conflict with Howard’s GameDay responsibilities. This seems like a solid way to expand his role, and to give him a chance to do something a bit different. We’ll see how he does in that role. It’s also clear that even in a time of layoffs and cuts, Howard was someone ESPN wanted to keep around, and that perhaps speaks to how important GameDay is to them.