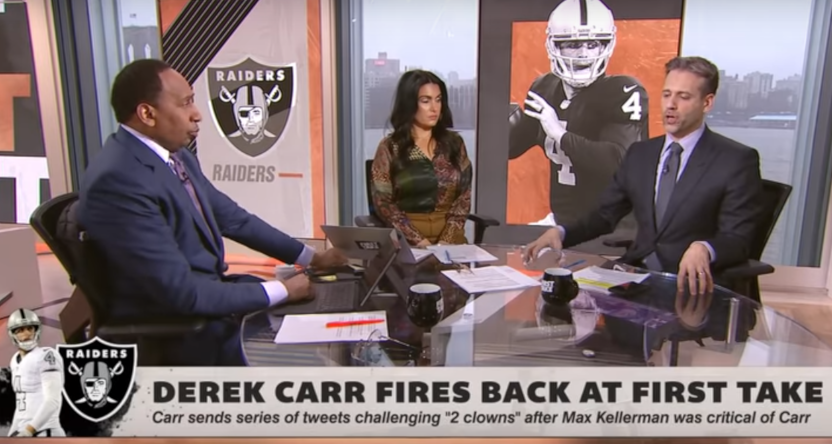 It’s not new to see athletes respond to pundits‘ criticisms, but it’s a bit unusual to see an athlete not only challenge pundits to a fight, but tweet the president of the UFC in an attempt to set up that fight. That’s what Oakland Raiders’ quarterback Derek Carr did this week after Max Kellerman dropped some criticisms of him on a First Take segment about if the Raiders should draft Kyler Murray. Here’s the initial First Take clip from Wednesday, including Kellerman saying “Carr didn’t want it” and “Gruden knows they have to move on”:

Someone tweeted at Carr about these criticisms (albeit without the actual clip, which is probably why he went at First Take co-host Stephen A. Smith, who didn’t actually say anything against Carr in this segment, as well as Kellerman), and Carr had quite the response:

?it’s because I blocked them both for talking trash about our team. Those 2 clowns don’t know anything about this game. Would love to actually sit and break down film with these two on tv just to show their viewers how incompetent (lacking qualification) they are about our game.

He then tweeted at the UFC and White to “challenge a couple of these clowns on TV to a fight”:

@ufc @danawhite hey how do I challenge a couple of these clowns on tv to a fight? I think we should start a business together. Where pro athletes can challenge some of these people to an octagon fight until they give us an answer…. You don’t know me… stop lying.

In a follow-up tweet, Carr made it clear he was particularly upset at Kellerman’s implication he wasn’t trying:

Yes..say what you want but don’t question somebodies character as a man if you don’t know them. Our job as NFL athletes is to try and leave the game better for the next generations. So let’s start an octagon business to give some accountability to these kinds of people. ????

The problem with tweeting at takey pundits like Smith and Kellerman is that your response often just becomes more fodder for them, though, and both of them went into this further on First Take Thursday:

And yeah, Stephen, “Carr didn’t want it” is calling him a quitter. But sure. And sure, Max, your job is to express your opinions, but expressing the opinion that a professional athlete has quit on his team without providing supporting evidence is a pretty bold move, and one that’s going to get you some blowback. Also, Smith may not have criticized Carr in the initial clip, but he sure did in subsequent tweets:

How would you know? You got something to tell us about your relationship with him? https://t.co/U1UIxlAdQX

Do I need to learn……or does @derekcarrqb and the @Raiders need to learn. Think about that? https://t.co/bNGJTD1yG0

And in a radio show clip:

Raiders’ QB @derekcarrqb has asked for a UFC fight with @stephenasmith. Bovada released odds on a potential Stephen A. Smith vs. Derek Carr fight.

And yes, as Smith noted, those odds are very, very favorable to him:

Wow! That’s real disrespectful to @derekcarrqb. The man is bigger, stronger and 24-years younger. He should have been given better odds 🙂 . So I guess heMll be reaching out to @danawhite to fight somebody else now!:-) https://t.co/rF2lFnIcsR

At any rate, this all adds up to another odd media saga. It’s understandable why Carr is upset, especially with Kellerman’s implication that he wasn’t trying, and it’s hard to say that he shouldn’t respond to that. And he’s certainly not wrong to call the First Take pundits clowns; that’s what they are, with their regular practice of saying ridiculous things in hopes of keeping viewers tuned in and their lack of emphasis on actually analyzing the league. If you’re looking for serious NFL analysis, you’re probably not watching a show where the pundits talk about Hunter Henry-Derrick Johnson matchups, confuse Kareem Hunt and Alvin Kamara, or proclaimed in 2016 that Tom Brady was about to “fall off a cliff.” (How’s that one holding up, Max?)

But the particular way Carr responded here wasn’t necessarily the best look, and “I can beat you up” certainly doesn’t prove anything. And beyond that, his response only provided more fodder for Kellerman and Smith’s hot takery, whereas just ignoring this probably would have ended its news cycle. But while it won’t ever happen, it certainly would be amusing to see Stephen A. or Kellerman get in a ring or an octagon with one of the players they criticize so casually, and it would definitely sell a lot of PPV buys. At the very least, that might make them think a little more before implying that an athlete “didn’t want it.” It seems more likely that this won’t change anything for them, though; getting an athlete to respond to their hot take bait just gets them more attention, and more things that they can talk about on the next show.