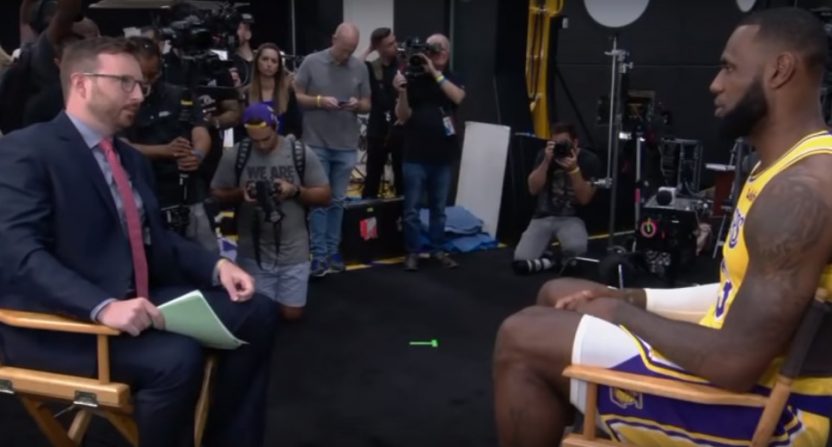 Dave McMenamin has spent the last four years crisscrossing the country following LeBron James’ Cleveland Cavaliers, and ESPN will have him continue doing the same now that LeBron is a Los Angeles Laker. ESPN has signed McMenamin to a multi-year contract extension, sources told Awful Announcing, with McMenamin returning to L.A., where he spent his first five years covering the Lakers before moving to Cleveland to cover James when he signed with the Cavs in 2014.

Despite interest from other outlets—McMenamin didn’t name names, but you know who the usual suspects are in the market right now—ESPN was definitely a priority for him.

“I’ll be able to say with this new deal that I’ve worked at ESPN for over a decade,” McMenamin told AA Wednesday over the phone from a coffee shop near the Lakers’ facilities in El Segundo. “It’s always been a place I aspired to get to, and the fact that I’ve been able to actually grow in my role and expand it since I got my foot in the door, there’s no other place I really wanted to be.”

McMenamin was able to cover Lakers championship teams led by Kobe Bryant and Pau Gasol during his first stint in Los Angeles, but the Lake Show began a downward spiral following a dismal 2013-2014 season. McMenamin said he went through a difficult breakup at the time, and the concept of having a change of scenery fell in his lap and the chance to cover LeBron coming back to Cleveland was too good to pass up.

“I truly believed at the time that I would go to Cleveland to cover LeBron James winning a championship for the city of Cleveland and break the curse,” he said. “I just believed it would happen.”

McMenamin was born in 1982 grew up in Philadelphia, where he was too young to see championships won by the Sixers in 1983 and Villanova in 1985. So he grew up rooting for teams that came oh-so-close to titles, including the 1993 Phillies, 2001 Sixers and 2004 Eagles. The Phils finally broke the city’s curse in 2008, when McMenamin was 25 and had just recently moved to L.A.

He flew back to Philly for the parade and “paid out the wazoo for the ticket, just to have that experience.” McMenamin called the day of the parade one of the best of his life, spending it with his family.

“We all got to revel in this day together,” he said. “I thought about being able to chronicle a team to lift a curse for that city the way that Phillies team did. To be able to cover a team that could potentially do that and provide those same types of memories for their fans was something that really appealed to me.”

It took two seasons, but the city of Cleveland got its championship. And the way LeBron and the Cavs won, of course, made it all the more special, coming from 3-1 down in the Finals against a Golden State Warriors team with the most regular season wins in league history.  While in Cleveland, he developed quite the bond with fellow Cavs beat writers Jason Lloyd and Joe Vardon, who he still has quite the active group chain message with.

“We’ve experienced life things together,” McMenamin said. “We’ve been through a lot together, and I’m going to miss them on a daily basis. Now when I’m in the doldrums of the Lakers season, they’re going to be the people I’m texting to.”

McMenamin thought the next place he could go after Cleveland was Philadelphia or New York, somewhere close to home. But he’s made lifelong friends in Los Angeles, finding himself going there in rare breaks during the season and the offseason.

“It really became pretty crystal clear that L.A. was a place I wasn’t finished with,” McMenamin said.

He thought there was a pretty good chance that if LeBron went to the Lakers that ESPN would offer the chance to continue to cover him, but he didn’t know for sure. However, given McMenamin’s experience covering James and his extensive experience with the people at the very top of the Lakers organization, it only made sense that ESPN would bring him back out west.

With his new contract, McMenamin is now able to combine his two experiences with ESPN, covering and Lakers and LeBron in one crazy, chaotic global spectacle, which truly began with Monday’s media day.

“It’s been a busy couple of days,” he said. “It is a full-immersion type job.”

Wednesday morning began with an email to his editor at 8:15 a.m. Pacific time about a podcast. McMenamin then emailed with his TV producer and spoke with ESPN.com colleague Ohm Yongmisuk about how they plan to cover the morning’s practice. As he checks his social media and sees the non-stop updates in his mentions, McMenamin is starting to realize that the fans’ appetite for content with this team is going to be insatiable.

On media day McMenamin conducted a one-on-one on camera sit-down interview with James for SportsCenter (screencap seen above), and said he’d never experienced something like that before.

“Fifty media members huddled around our interview,” McMenamin said. “They were spending their time on media day watching my interview with LeBron, and I assume tweeting out stuff and nuggets, or whatever. I’d never quite done that before. That was a different level of interest than I’ve seen.”

A clip of a seemingly innocuous interview McMenamin did with Lakers forward Michael Beasley ended up being used the next morning on “Get Up.”

“I’ve gotten a glimpse already of this being a little different beast than the ones I’ve tried to slay before,” he said.

And with a Laker team bursting at the seams with personalities, from Magic Johnson and Jeanie Buss to Lonzo and the Ball family, Rajon Rondo, Lance Stephenson and JaVale McGee, “It can be head spinning sometimes. Ohm and I have spoken a little bit about trying to quarterback how we’re going to handle a postgame locker room. There could be more voices than we could handle sometimes.”

But after following LeBron around for several years and his numerous years of experience in L.A., McMenamin is ready for the challenge ahead.

“I’ve been through the circus a couple of times,” he said, “so I’m comfortable trying to play ringmaster.”