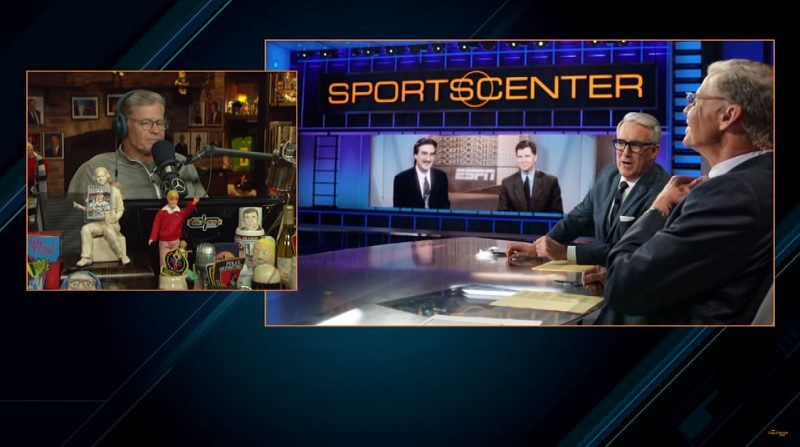 Here’s the full 15 minute clip, and some highlights.

-Patrick on his relationship with Olbermann: “we haven’t been in touch. We never really had a close relationship. But when we did SportsCenter, we did it and you would have thought we were best friends. And we did it for the right motives. We just wanted to make great TV. And for almost five years, we did. We get far too much credit, but it was still fun to be up there.”

-Patrick on keeping the reunion a secret: “I said to ESPN, ‘nobody can know about this. Let’s try to keep a secret for a change.’ Even on campus, Chris Berman and Bob Ley and no idea I was doing a show that night. They had no idea. So when I left, I said goodbye to Chris Berman, and he said ‘thanks for coming home.’ He did not know that I was not going home, to my actual home, and that I was staying there. You probably had about 15 people who knew. Management got a hold of Keith and Keith said he’d love to do it. He got up there, I hadn’t seen him in awhile, haven’t talked to him, and it didn’t take long before all of a sudden, we’re just having fun.”

-Patrick on whether this will happen again: “I’m not going back to work at ESPN doing SportsCenter. This was a one and done, officially retire, and I’m glad I did it. If you would have said to me two years ago, five years ago, seven years ago, I would have said never.”

He then goes on to discuss the panel discussion earlier in the day at ESPN, and the emotions of being on stage with Berman, Bob Ley, Robin Roberts, and Mike Tirico. The whole clip is a very retrospective, emotional watch, especially for those that grew up watching The Big Show in the ’90s.