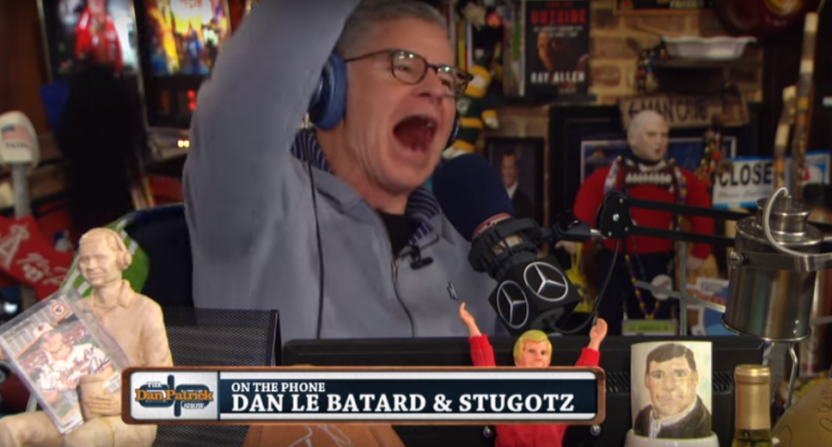 The Dan sports radio universes intersected Friday, with Dan Patrick calling in to The Dan Le Batard Show With Stugotz and the result being broadcast live on both shows. And it led to a fun seven-minute back and forth about everything from Jerry Ferrara (best-known for playing “Turtle” on Entourage to a basketball showdown between the shows to Sports Jeopardy having to go through Skip Bayless or Stephen A. Smith to if Patrick is on “a real network” to the last movies they watched):

This is bizarre, but entertaining, which could summarize most of the work of Le Batard and Stugotz. This all apparently started with Stugotz mocking Patrick Thursday for having Ferrera on, which led to the shows setting this up. And the back-and-forth here starts with Stugotz mocking Patrick’s Danette staff for booking Ferrara and wondering what he’d done since Entourage (as per Wikipedia, he’s been on Power and Shooter, so, fair point, Stugotz), then blaming executive producer Paul “Paulie” Pabst for that booking and saying director of operations Patrick “Seton” O’Connor should “save Paulie from Paulie.” Stugotz goes on to discuss a basketball game between the shows’ staffs, and says Patrick is claiming Reggie Miller as a Danette, with Le Batard saying “Are you one of those steroid guys, Patrick? Reggie Miller’s steroids, PEDS! You need that to beat us?”

Patrick then proposes a one-on-one game between him and Stugotz, saying “Le Batard’s above this,” but then says “First of all, you have to go through Skip Bayless. You beat Skip Bayless and then you get me, there’s a bracket challenge to this.” Stugotz says “I don’t know Skip Bayless, I don’t want to play Skip Bayless” and Patrick proposes Stephen A. Smith instead, and Le Batard tries to rile up Stugotz with “He’s hitting you again with the resume!”

They then later discuss Sports Jeopardy, and Patrick says he’ll do an all-sidekick edition of the show, while Stugotz strikes back with “Maybe I get you with a host who’s on a real network!” (which isn’t all that fair, as Patrick’s show is simulcast, NBCSN is in many, many millions more homes than either The Le Batard Show‘s current home of ESPNU or its future home of ESPNEWS, to say nothing of the extra bump Patrick gets in TV viewers from his show being on Audience and some regional networks as well).

After that, Patrick makes a crack of “Wait, I thought you guys were going to SiriusXM? Is that the real network you guys are going to?” That’s a reference to Ryan Glasspiegel’s recent report at The Big Lead that “Dan Le Batard has had discussions about the possibility of moving his ESPN radio show exclusively to SiriusXM” after Le Batard’s contract expires this summer. However, that report also mentioned that “it’s also possible — likely, even — that his radio show remains at ESPN.” So that’s not necessarily happening, but it is a nice shot back from Patrick. And they then discuss their most recent movies watched, from Stugotz’s Tango and Cash to Patrick’s Romeo Must Die (Le Batard’s prediction of “I’m going to guess it starred you and Adam Sandler” was pretty good).

This isn’t a very serious beef at all (much less so than Le Batard’s feuds with the likes of Tony Rizzo, Diamond Dallas Page, and Michael Rapaport) , but it’s a fun one, and it’s interesting seeing these two shows go at it in an exchange broadcast on both networks. It looks like we have a new candidate for “the most ambitious crossover event in history.”