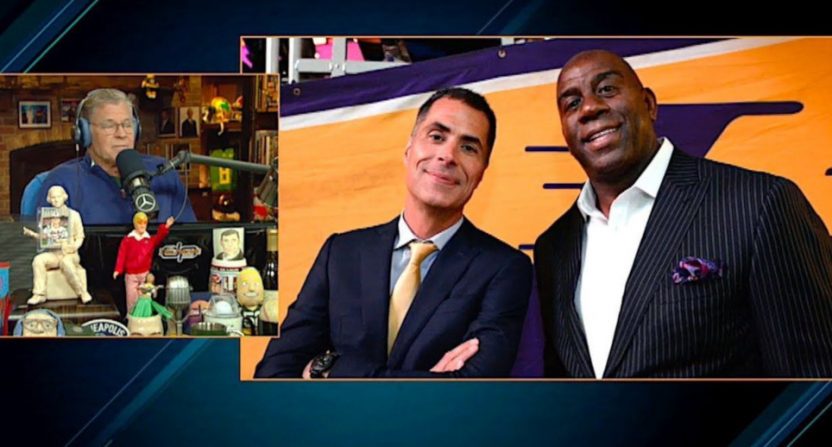 Tuesday saw ESPN.com running a detailed reported piece by Baxter Holmes with strong criticisms for Magic Johnson and Rob Pelinka from current and former Lakers’ employees. That then led to ESPN’s television personalities (Stephen A. Smith in particular) dumping all over that report, and then Johnson himself criticizing it on the ESPN airwaves during what was supposedly a “NBA Finals Preview” with him, Smith and Michael Wilbon. ESPN’s television actions in the wake of that story took criticism from plenty of corners, but a particularly notable one came from Dan Patrick Wednesday.

Here’s a clip from Hour 2 (starting at 8:25) of Wednesday’s edition of The Dan Patrick Show, which has Patrick saying that he would have preferred it if they’d brought Holmes on as well as Johnson:

“Magic and the Lakers’ mess continues, he had a sitdown with Michael Wilbon and Stephen A. Smith last night. I don’t know if it was under the guise of ‘We’re going to talk NBA playoffs,” but it was really about Magic clearing his name, and I didn’t think Michael and Stephen A. pressed Magic at all. And I would have had the writer on the show just to say ‘Here’s the information I have.’ If you’re going to do it and be fair to the topic, to the people in the organization and to Magic, then do a full story here. Not one of these cursory ‘Hey, we brought it up and then moved on with this.'”

“We would love for Magic to be exonerated and not be guilty of some of these charges or of people’s opinions. But your own reporter, in your building, in your company, did a vetted story, a thorough story, interviewing a lot of people here. And you can’t just brush it off because you’re friends with Magic Johnson. I would have had the reporter on and then you could have had a legitimate back-and-forth and really good content there. But they chose not to.”

And this may not be the only criticism Patrick had for ESPN’s television handling of the Johnson story. Dan Patrick Show director of operations Patrick “Seton” O’Connor tweeted an “I was embarrassed by it” clip. However, that link now goes to a video that’s unavailable, and one that isn’t posted on the show’s YouTube page. And our pass through all three hours of the show didn’t locate the “embarrassed” quote, so if anyone has info on where that came from, let us know in the comments. For what it’s worth, O’Connor’s tweet was still up as of 3 p.m. Eastern.

"I Was Embarrassed by It" – Dan Patrick on ESPN's Handling of Magic's Response to Scathing Report https://t.co/ypSHrM1VMm pic.twitter.com/L51r8AszUn

As discussed yesterday, ESPN’s television platforms definitely behaved oddly here; the usual ESPN news cycle is for one of their stories to be analyzed and discussed by their shows, but not just regularly bashed. And if there are criticisms for a story, they’re usually specific and detailed, not just Stephen A. Smith ranting about not liking the story.

But it’s notable that Johnson spent quite a while as an ESPN employee, working on NBA Countdown (often alongside Wilbon) from 2008 through 2013 and again briefly from December 2016 to February 2017 before leaving for the Lakers. And that may have led to them helping to turn the NBA Finals preview (which was previously scheduled) into a soft-focus platform for Johnson to defend himself (shortly after they gave him a soft-focus platform to defend himself on First Take last week). But as Patrick said, “You can’t just brush it off because you’re friends with Magic Johnson.” ESPN seemed to take that tack here in their TV coverage of this story, but that’s dramatically out of the norm for their coverage of a story like this, and particularly out of the norm for a story from one of their own reporters. And many, including Patrick, took notice.