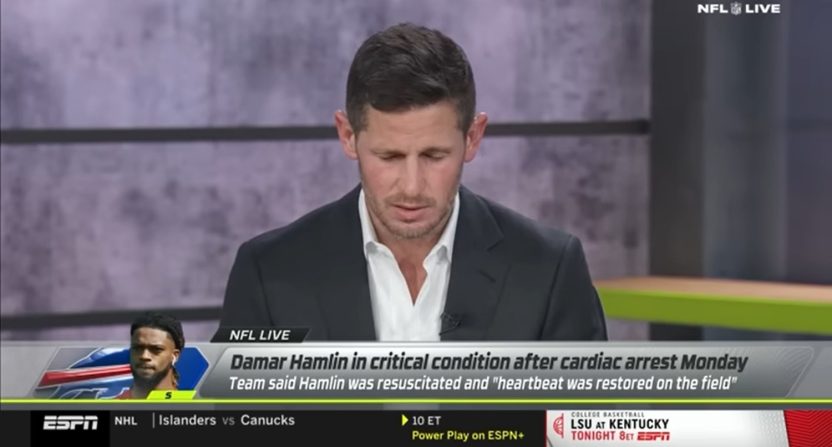 Regardless of race, politics, or religion, everyone is unified in hoping to see Buffalo Bills safety Damar Hamlin make a full recovery after tragically going into cardiac arrest on the football field Monday night.

Following the injury, many have stated they’re sendin Hamlin “thoughts and prayers.” Nut ESPN’s Dan Orlovsky went a step further with the sentiment and spontaneously began praying at the end of NFL Live Tuesday afternoon.

“This is a little bit different. I’ve heard it all day. ‘Thoughts and prayers,'” Orlovsky began. “Maybe this is not the right thing to do but it’s just on my heart that I wanna pray for Damar Hamlin right now. I’m gonna do it out loud, I’m gonna close my eyes, I’m gonna bow my head and I’m just gonna pray for him.”

After co-analyst Marcus Spears said, “it is,” informing Orlovsky that he believed praying aloud on ESPN’s NFL Live was the right things to do, the retired quarterback started his prayer for Hamlin, who remains in critical condition.

“If we didn’t believe that prayer didn’t work we wouldn’t ask this of you God. I believe in prayer,” Orlovsky continued. “We believe in prayer. We lift up Damar Hamlin’s name in your name. Amen.”

After about 50 seconds, his NFL Live co-hosts Marcus Spears and Laura Rutletdge joined in saying “amen,” before they both complimented Orlovsky for his words.

In the days since watching Hamlin go into cardiac arrest, it’s hard to find someone discuss the tragedy without prefacing it by saying something along the lines of “we’re praying for a miracle.” Many media members, regardless of their religion or religiousness, have said “thoughts and prayers” for Hamlin. The Bengals and Bills have both acknowledged they’re praying for Hamlin, his teammates and family have requested that everyone continues sending prayers for the 24-year-old as he remains in critical condition.

At some point, we become immune to just hearing “thoughts and prayers” and the sentiment becomes empty. Watching someone actually pray on ESPN was different and surprising. But kudos to Orlovsky for being open enough with the audience to speak about something that was important to him, and kudos to ESPN for giving Orlovsky the on-air freedom to not stick to sports.