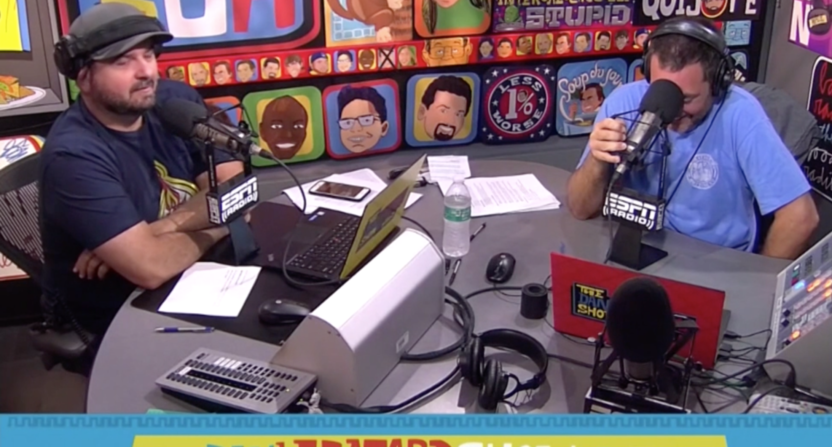 For several years now, ESPN has faced the accusation of liberal bias, stemming in part from the perceived viewpoints of its on-air personalities.

And for that very reason, says ESPN radio and TV host Dan Le Batard, it’s a good time to be a conservative looking for a job in Bristol. Via The Big Lead, here’s Le Batard’s explanation:

And here’s a written version of Le Batard’s comments:

“You know the best way in this industry to climb right now? Being the thing that you think that ESPN won’t hire. The best way to get in this business—I’ve got so many attorneys, so many lawyers, so many doctors ask me, ‘How do I do what you do? How do I get up there and give my sports opinions? That job looks like it’s more fun than my job.’ And my advice right now would be: Be the conservative sportswriter. ESPN needs more of those. Be the conservative. Will Cain—ESPN will be more likely to hire this person that you believe is not welcome at ESPN specifically because you believe that ESPN doesn’t have enough of them.”

Le Batard referred to ESPN host Will Cain, who last week criticized Kevin Durant for boycotting the White House in an explosive First Take segment, then seemed to imply that liberals call anyone who disagrees with them “stupid or immoral.” ESPN recently signed Cain, who is never shy about his conservative viewpoints, to a multi-year extension. In the press release announcing Cain’s new contract, an ESPN executive praised his “different and provocative point of view.”

Anyway, back to LeBatard’s point about conservatives at ESPN. The suggestion that ESPN will look to hire people with right-of-center viewpoints, while on its face maybe counter-intuitive, makes a good deal of sense. Le Batard’s point seems to be that ESPN wants to appeal to the most viewers possible and will therefore assuage right-wing critics by hiring outspoken conservatives. That argument should hold water for anyone who believes that ESPN (owned by Disney, which is traded on the stock market) seeks to maximize profit. To the extent that the perception of liberal bias hurts the company’s bottom line, you can expect ESPN to combat it, and if hiring more conservative opinion-givers helps the company draw a bigger audience, then that’s presumably what it will do. It’s most likely in ESPN’s interest to make the “liberal bias” criticism go away.

Unless, of course, you believe that ESPN is nefariously pushing liberal politics to serve some sort of secret agenda. In that case, you might think Britt McHenry was fired for her politics, Sage Steele was demoted for hers, Will Cain is just a token and Le Batard is way off.