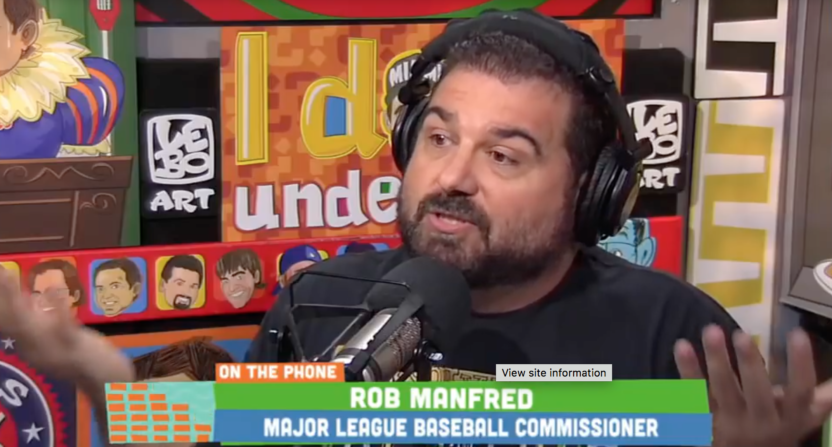 It’s not a great time to be a baseball fan in South Florida. The Miami Marlins’ new ownership group — fronted by Derek Jeter and backed by billionaire Bruce Sherman — announced its desire to slash pay and got right to work, trading Giancarlo Stanton and Marcell Ozuna. For a fanbase that has endured numerous fire-sales over its 25-year existence, this teardown is understandably frustrating.

After Le Batard welcomed Manfred by saying baseball didn’t deserve a single fan in South Florida, Manfred pointed out the Marlins have won two World Series titles since being founded in 1993. Then Le Batard cut to the chase:

Le Batard: Rob, were you aware of Jeter’s plan to trade players and slash payroll?

Manfred: You know, it’s interesting. We—

Le Batard: Yes or no, please.

Manfred: You know, I’m happy to do yes or nos—

Le Batard: You can elaborate afterward, I just want to know if you were aware of the plan. Did you approve a plan that had “slash payroll” again for South Florida?

Manfred: We do not approve operating decisions by any ownership. New owner, current owners or not. And as a result the answer to your question is no.

Manfred: I’m not gonna be deposed like this is some adversary thing. You want me to ask me questions, I’ll answer them the way I want to answer them. If that’s not good enough, we’ll move on.

Le Batard: No, that’s fine, but you’re coming on here and saying you weren’t aware of Jeter’s plan to trade players and slash payroll? We’re starting with a lie, Rob. That’s where we’re starting. You can’t tell me you’re not aware of that.

Manfred: I’m not going to sit here and have you call me a liar. I explained to you that we do not get involved in operating-level decisions in the ownership process, the ownership approval process. Clubs make those local decisions by themselves.

Manfred: No. No. We did not have player-specific plans from the Miami Marlins or any other team that were approved in the ownership process. Those are decisions individual owners make, and they do not have to be cleared by us or approved by us.

Manfred’s claims that he had no clue Sherman and Jeter would cut costs don’t exactly pass the sniff test, and in fact, according to the Miami Herald’s Barry Jackson, the commissioner’s denials were essentially false.

A source directly involved in the Marlins sales process, after hearing the Le Batard interview, said, via text: “Commissioner said was not aware of [Jeter] plan to slash payroll. Absolutely not true. They request and receive the operating plan from all bidders.

If Jackson’s sources are to be believed, Le Batard’s skepticism about Manfred’s professed ignorance were entirely appropriate.

It’s not often you hear someone go after a commissioner like Le Batard did, especially with the guy on air and especially while working for a rights-holder. But if there’s anyone in sports media who was going to do it, Le Batard was definitely the guy.