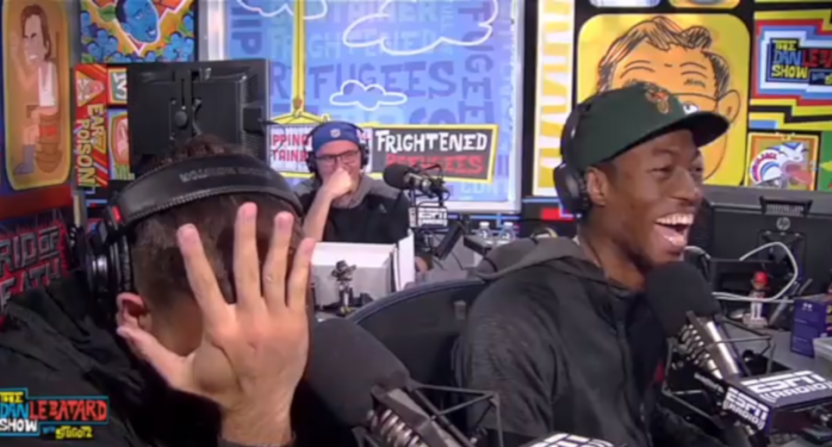 The Dan Le Batard Show with Stugotz often produces some unconventional interviews and some behind–the–scenes commentary on ESPN’s dealings. On Friday, they managed both in a single segment. Le Batard was theoretically interviewing ESPN MMA reporter Ariel Helwani about Saturday’s UFC Fight Night 143, the first card on ESPN+ under the new contract the sides signed last May, but he repeatedly muted Helwani and turned it into more of a commentary on ESPN’s change of heart about MMA, with his producers wincing as he did so. Oh, and the whole thing got hijacked by Le Batard FaceTiming Tony Kornheiser mid-interview.

Let’s go through how this happened, starting with the intro to Helwani, with Le Batard calling MMA “a sport that’s a damn sewer” and saying “it’s a sewer that ESPN didn’t want before but wants now all of a sudden, it was too violent for Disney but now it’s fine,” then telling Helwani to “sell your thing real quick.” Helwani tries to discuss his previous appearance on the show and brings up Marlins’ owner (and former Expos’ owner) Jeffrey Loria, and Le Batard mutes him to call Kornheiser (the long-time co-host of ESPN’s Pardon The Interruption, but described on screen as “co-owner of D.C.’s Chatter Restaurant“)

That goes on for a couple of minutes, and Le Batard then cuts back to Helwani, who talks about how he was previously on Le Batard’s show after the UFC (briefly) banned him, with Le Batard cracking jokes about him and then “texting me with his tail between his legs”:

Le Batard then cuts off Helwani mid-sentence again and starts talking about the history of ESPN and “the MMA,” and says “Let me take you back to the beginning”:

He continues with “the beginning of prehistoric fighting,” and says “I need to tell this story” after disregarding his producer’s request of “Can we just talk about the fight?”

That then turns into Le Batard saying “Dana White wanted John Skipper just to be seen at a fight with him, because that sport, as you know, has the reputation of sewage, and that sewage isn’t something that Disney necessarily wanted to get into bed with. And so now, what has happened is Disney sees ‘Oh, there’s money to be made in MMA,’ and Disney’s buying everything, and ESPN’s buying everything, and now we’re telling you that the violence is okay. It wasn’t okay before, but now the violence is okay, and now we sell it to you with ESPN+.”

Le Batard then says he does love the sport, the producer tries to get Le Batard to talk to Helwani (“the face of our media coverage”), and Le Batard asks Helwani to “sell what this event is,” Helwani says he’s not there to sell anything and that his only previous interaction with Amin Elhassan (Le Batard’s co-host Friday) was Elhassan calling him a MMA shill on Twitter:

Helwani then notes (correctly) that the biggest reason in ESPN’s change in philosophy was that “the great Jimmy Pitaro is the president of ESPN, and he recognizes that MMA is a wonderful sport.” Le Batard then cuts him off again:

But Le Batard followed that by praising Helwani’s work:

And then actually promoted the fight card after cutting Helwani off for good:

All in all, that’s quite a strange interview. But it’s not really that unprecedented for Le Batard, who’s previously gone at people that ESPN is much more concerned about offending than one of their own reporters (like, say, MLB commissioner Rob Manfred) and hasn’t suffered much from the blowback. And Le Batard is right that ESPN has changed its tune on MMA, and him saying so isn’t necessarily a big deal; him calling it “a damn sewer” is something else (and that might tick off, say, UFC president Dana White), but again, Le Batard’s known for some strong comments, and ESPN hasn’t usually cared enough to punish him publicly. (They only really got mad when he bought a trolling billboard, and when he turned his Baseball Hall of Fame ballot over to Deadspin.)

And as he shows even in this interview, Helwani doesn’t tend to get too upset; he later tweeted that he probably won’t go on Le Batard’s show again, but his comments were pretty mild, all things considered.

Second time they do this to me. Like I don’t have better things to do. Doubt I’ll be back on but hey, welcome to the “sewage” era, Dan. Glad to have you along for the ride. ? https://t.co/0CtyjZCoGk

Of course, Le Batard’s handling of this really wasn’t the best. If he wanted to rant about MMA and about ESPN’s changing relationship to the sport, he could have easily done that without wasting Helwani’s time. (He may have received more attention by doing this with a famed MMA reporter on the line than he would have for just delivering these thoughts as a tangent, but it’s still not a great look.) But considering the history of the things Le Batard has done and the things he’s actually been punished for, it seems pretty unlikely that ESPN’s going to get too mad about this.

White, on the other hand, might be less thrilled that his sport’s been described as “a damn sewer” on a rights partner. Even if that aligns him with a long-time adversary in Helwani. But on the other hand, Le Batard’s comments came on a ESPNU simulcast of a radio show, not exactly ESPN’s highest-profile platform, and there are plenty of people on ESPN who say favorable things about MMA and the UFC. It’s also not clear that any backlash from White would do much of anything here; ESPN tends to stand up for its employees under pressure from leagues, which, as Helwani noted last summer, is a significant difference from what happened with the UFC on Fox. So we’ll see if anything comes of this, but the bet from this corner is that this is just remembered as the latest in a long series of unusual Le Batard interviews/commentaries.