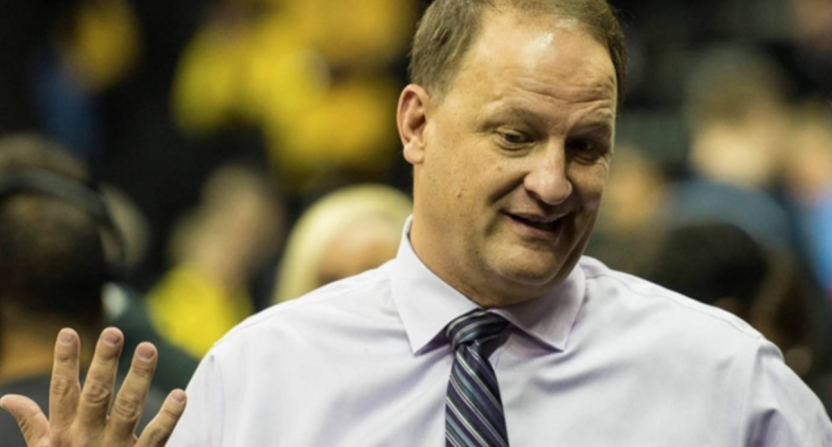 Dan Dakich is entitled to his opinions. He’s also a 58-year-old man who seems unlikely to change them. Dakich remains entrenched, and he’ll be damned if anyone tries to persuade him into acknowledging the validity of a different point of view.

This, of course, brings us to the latest Dakich kerfuffle. The Indianapolis radio talk show host and ESPN college basketball analyst made some objectionable comments last week after a heated Twitter exchange about student-athlete compensation.

Dakich could have argued in a reasonable and respectful way. He could have called for a stalemate. But that’s not on brand for someone whose Twitter bio reads: “Family Motto: Sack Up.”  He has been called out for misogynistic comments and doxing on his radio show. It’s not entirely surprising for a guy who has been in hot water before.

On Sunday afternoon, Dakich deactivated his Twitter account, but by later that evening, he returned. Here’s what he had to say:

Ironically..it came up with 2 options
Deactivate for 6 months
Deactivate for 12 months
I took it as a sign and deactivated for a year
Amazing things happen to me in church

Too much fun to be had and too much truth to be told!!!

Dan Wolken of USA Today reported that ESPN is “looking into” Dakich’s comments. ESPN spokesperson Anna Negron said: “We are taking this matter very seriously and are in the process of looking into it.”

Let’s look at how we got here. A lot of people had a lot to say over Jalen Johnson’s decision to opt-out of the rest of the college basketball season for Duke, including Dakich.

Jalen Johnson does not have a “camp,” “people in his ear,” or a “posse.” He has a family. He has a mother and father helping him, with his best interests in mind, making decisions. We can differ with the decision, but the undertones of the criticism of Johnson are concerning. pic.twitter.com/icKqC9u0Cp

Nathan Kalman-Lamb, a Lecturing Fellow at Duke who teaches on issues such as the intersection of sport, labor, race, and social inequality, took issue with media members labeling Johnson as a quitter. Among the people he singled out was Dakich. That led to a heated Twitter exchange eventually resulting in Dakich blocking Kalman-Lamb.

Things continued to escalate when other academics chimed in, including Dr. Johanna Mellis, a historian who co-hosts a podcast about capitalist sport, labor, and justice. Last Wednesday, in an odd attempt to justify his comments, Dakich went on a bizarre rant.

Dakich called Kalman-Lamb a “d-bag” and started doxing Kalman-Lamb by spelling out his last name. He referred to Dr. Mellis as “some lady” who was “bitching” at him. You can listen for yourself here. Just cue up the Feb. 24 radio show and start listening around the 36:46 mark.

You can also read some of what Dakich said below:

“I had somebody come at me. Buncha academics last night. Two guys and a lady, right? Two guys and a lady came at me. And they said, ‘well, you’re yelling at student-athletes while they’re being exploited’ or something, and I said, look, maybe, but I… I was in the arena and you guys were sitting outside bitching. Now, remember, it was two girls… two men and one lady. Guess what that got called? Sexist. (Laughs) Be careful. I didn’t even realize, I just said bitching because it’s what people do. It’s what everybody does, everybody just bitches. But that’s sexist apparently because I said bitching and a lady was in the conversation. And I said outside the arena, and then she wanted to, quote, go at in the pool. Well, if you go at it in a pool, that’s a public place and then I’m gonna have to get divorced, and then it’s just gonna be a problem.”

Name-calling is a poor and ineffective way to argue. And what he said about Mellis sounded alarming at best and threatening at worst. Whatever point he tried to make was completely undercut by his own words. It will be interesting to see how his employers respond. Unless there are repercussions, Dakich probably doesn’t care what anyone thinks.

Dakich played at Indiana University in the 1980s, and later was an assistant under Bob Knight. Back then, coaches didn’t make life-changing salaries off the backs of unpaid labor. That was before television dollars turned every major conference coach into a millionaire. CBS pays billions for the NCAA Tournament. College basketball is such a cash cow that the sport is hellbent on playing during a pandemic because too much money is at stake.

Change is on the horizon though. More people believe that college athletes should be fairly compensated. State laws are being passed to allow them the right to make money. The NCAA might be legally compelled by the Supreme Court into drastically altering its business model.

Dakich isn’t a fan of such change. He believes that the way he grew up is the way things should be forever. A scholarship was good enough for him when he played. Should be good enough for college athletes now.

He also seems to hold little regard for student-athlete empowerment. No wonder. He played for and worked for a dictator of a coach who ruled by fear and intimidation. People excused, enabled, and tolerated Knight because he won. Once Indiana stopped contending for championships, Knight’s antics were finally seen as problematic, and he was fired.

So, when an unpaid 19-year-old leaves Duke during a pandemic, Dakich is far too comfortable describing Johnson as part of the problem. Are the Blue Devils better without him? They’re 3-1 since he left. But is that causation or correlation? And does that even matter?

Johnson is an adult who can make his own decisions – good or bad. You can disagree with his choice, but it’s his to make. Dakich, as a college basketball analyst, has the right to examine the pros and cons of Johnson’s decision. But that should not include undermining and belittling others, or using inflammatory language.

Dakich is so rigid in his beliefs that he lashed out with ugly, unnecessary words. There might be some who call this political correctness and cancel culture run amok. Many of them probably look and sound a lot like Dakich.

Dakich has the right to his opinions. But he must also accept the backlash when he clearly steps out of bounds.