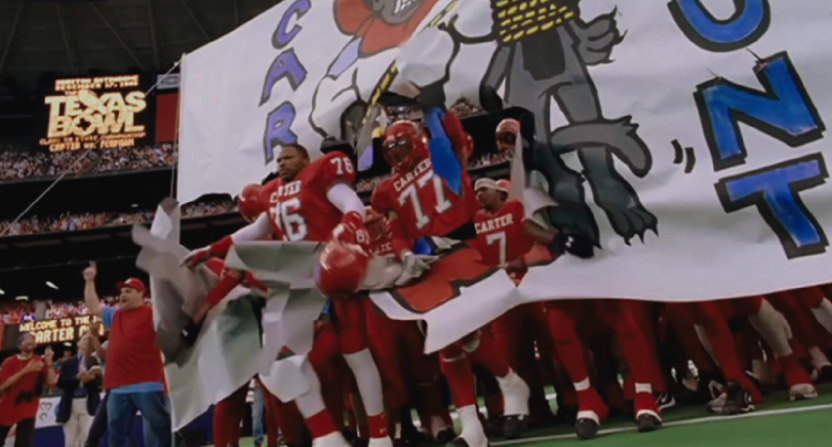 ESPN’s latest 30 for 30 film, What Carter Lost, premieres Thursday at 9:30 p.m. ET. The documentary remembers the 1988 Dallas Carter high school football team which beat Permian High in Friday Night Lights (both the book and movie adaptation). In his review for Awful Announcing, Ben Koo praised the film for its “introspection on sports, community, education, and criminal justice.”

The documentary begins with longtime Dallas sports columnist Randy Galloway explaining that “one of the greatest legends involves the team that you don’t remember from Friday Night Lights.” Former NFL star LaDainian Tomlinson said that 1988 Dallas Carter squad was “the greatest high school team that has ever been assembled.”

Yet one of the persistent themes of What Carter Lost is how an inner-city black school was viewed by the suburban Dallas schools. Reality was quite contrary, as the Carter community was an affluent one, accomplished academically and professionally.

“Your first generation of African Americans who had medical doctorates, who had PhDs, who were lawyers, who were judges, who were principals at the high schools,” said Donna Matsumura, a teacher at Carter High from 1983 to 1989.

But a chief culprit in how Dallas Carter and its 1988 football team was the movie adaptation of Friday Night Lights, directed by Peter Berg. Not only was Dallas Carter “the other team,” but they were also portrayed as villains during the state championship game against Permian.

“They took every negative stereotype of a black inner-city school and they applied it to Carter,” said Matsumura.

What Carter Lost shows clips from the Friday Night Lights movie with the Carter players scowling, hitting the Permian players from behind, pushing after the whistle had blown, and even kicking a football helmet into the face of a defenseless player on the ground. 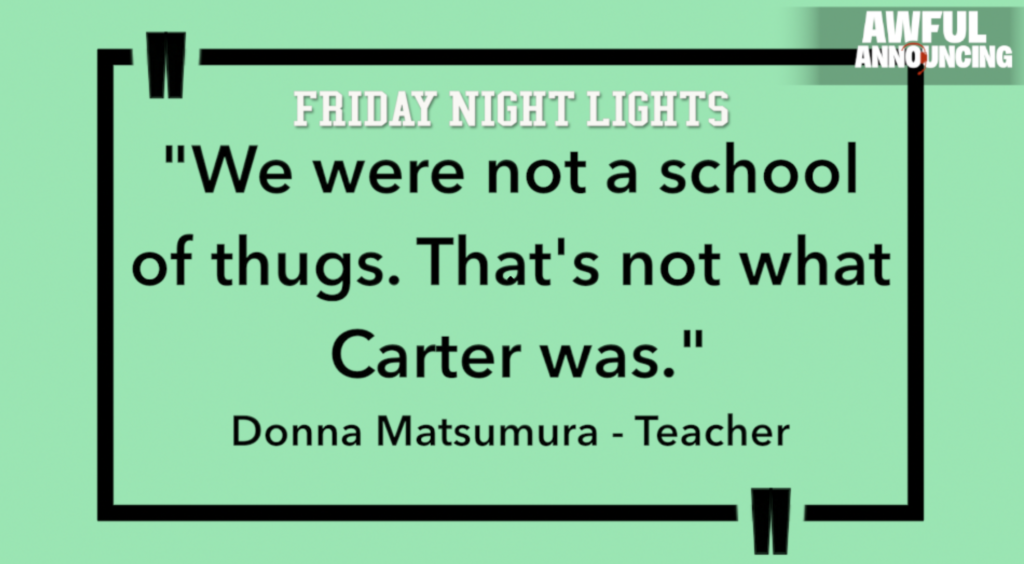 “We weren’t kicking anybody, we never played dirty like that,” said Joe Burch, an offensive lineman on the 1988 Carter team.

“Wherever you go, that’s kinda what people thought about you, ” said Carter quarterback Robert Hall.

For dramatic purposes, it served the story for Friday Night Lights and Berg (along with co-screenwriter David Aaron Cohen) to make Permian’s opponents the bad guys. Permian was the focus of the film and thus the “heroes” of the story. But the truth wasn’t that simple or reductive. The kids on the Dallas Carter side had plenty to deal with, as What Carter Lost details, and weren’t a marauding team of renegades looking to break rules and hurt their opponents.

But that perception sticking nearly 20 years later shows the power of a movie to create an immediate and lasting impression of real-life figures. Though Friday Night Lights‘ filmmakers would surely cite the need to create drama and an engaging story — which is their ultimate goal — those decisions did have some consequences, as it turns out. And those Dallas Carter players are trying to shake that perception long after their high school days have passed.