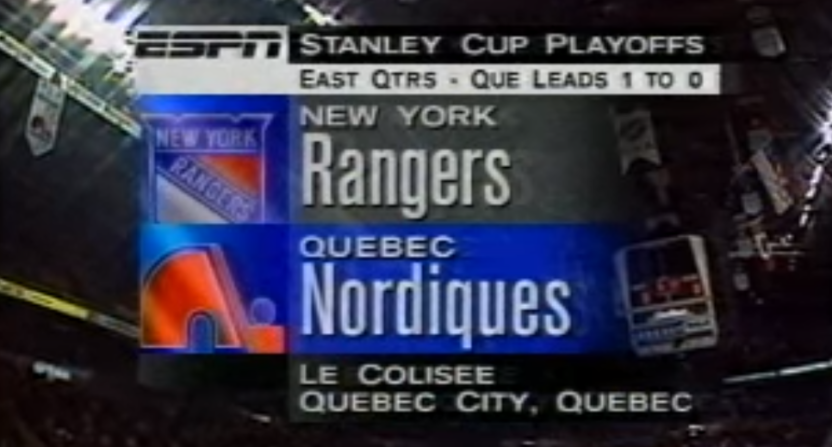 The NHL has a long history on ESPN, with games airing there from 1980-82, 1985-88, and 1992-2004. Since that time, the league has been on NBC and Versus/NBCSN in addition to its own NHL Network, and the ten-year extension of the NBC/NBCSN deal in 2011 means rights won’t come up until after the 2020-21 season. But there’s been a lot of talk amongst NHL fans over the years about how games should be on ESPN in order to grow the sport. And that was especially true during the era where the NHL got little attention on ESPN studio shows and SportsCenter and was described as “not translating to a national discussion” in 2012 by then-ESPN executive Vince Doria, which many attributed to them not having rights.

ESPN has shown more interest in hockey lately, though, hiring the likes of Emily Kaplan and Greg Wyshynski (of course, those moves came after they laid off a ton of prominent NHL writers, including Pierre LeBrun and Scott Burnside), doing more hockey segments on SportsCenter, airing the World Cup of Hockey, and even simulcasting TSN’s trade deadline coverage this year (the whole thing will be streamed, two hours of coverage will air on ESPN2). They will also be offering some NHL games through their upcoming over-the-top ESPN Plus product.

But the even more notable discussion may be about if ESPN might someday have some NHL TV rights again. SportsCenter anchor, college hockey play-by-play voice. and noted hockey fan John Buccigross told BSN Denver last summer “I’m real optimistic that we’ll be a part of the NHL plan next time,“ and that’s starting to look less and less far-fetched. ESPN certainly seems likely to be involved on the streaming side, and the chances of them getting involved on the TV side appear on the rise too.

The key question there may be if the NHL and/or NBC are open to a split package. It seems highly unlikely that ESPN and/or ABC would offer a bid for exclusive NHL rights that would be acceptable to the league, considering the commitments they already have to the NBA through 2024-25. The overlap of the NHL and the NBA seasons would make it incredibly difficult for ESPN/ABC to be the sole NHL broadcaster in the U.S., especially when it came to the playoffs.

Moreover, NBC is strongly focused on hockey. Hockey fits in with their overall strategy of “super-serving” fans of less-publicized sports, is NBCSN’s “anchor property,” and has produced impressive results for them, so they presumably wouldn’t drop out of the NHL picture without a fight. But the idea of a split national NHL package that’s closer to how ESPN/ABC and Turner split the NBA rights might have some merit. That could potentially work for all sides, and could let ESPN get back in the NHL on TV picture. Here’s more on what Buccigross said there last summer:

“Now, whether the NHL is going to go with multiple partners, like very other sport does. … you know, you can’t afford the NFL (alone), because every game is national obviously, there’s no local games. The NBA, there’s so many games (that) we share with TNT. And baseball has a million. So whether or not we split it and we have some and another carrier has some, we’ll see,” said Buccigross, who said he considered leaving ESPN to be a play-by-play man for two NHL teams before renewing his contract.

“But yeah, I think we’re in a position, with our new BAM investment that we made with MLB Media, that’s a huge technology investment that ESPN and Disney have made (and we’ll own the whole thing soon, 100 percent of it) that’s going to give us a great position, tech-wise, for apps and things and the future of streaming. I think we would be a very attractive partner, with obviously plenty of networks and plenty of channels.”

And there is potential value there for everyone involved. The NHL could presumably get more games on national television this way, and would have the advantage of some of those being on ESPN (and thus, probably getting a little more promotion on the rest of ESPN’s programming) as well as NBCSN. They could probably also get more money; unless NBC is willing to pay a significant premium to keep exclusive national rights, bringing a second national network into the picture could boost the revenue. Some of their early-round playoff games might wind up on more sports-focused channels like ESPN or ESPN2 instead of CNBC or MSNBC.

For NBC, they might be able to pay less than they would otherwise for a similar package if it’s no longer exclusive. Their non-sports channels might not have to shift to NHL programming during the playoffs. And they could also benefit from increased NHL programming on ESPN; if that grows the league overall, that means more people are likely to watch NBC and NBCSN games as well, and that’s particularly true if they’re able to hang on to the Stanley Cup Final rights.

For ESPN, live sports are still king, and a smaller, non-exclusive package of NHL rights might represent good value for their rights money, something that’s becoming more and more important all the time. Something else to note is that the Disney/ESPN planned purchase of Fox assets, including regional sports networks, means they’ll be the parent corporation of a lot of the regional networks that cover hockey. So they’ll have some existing relationships with many of the NHL’s teams, and they’ll have some in-house hockey on-air and production talent, some of which might get bumped up to national games.

Is this a foregone conclusion? Not at all. Maybe ESPN won’t even put in a bid. Maybe the NHL won’t want to do more national games (which could affect the value they get from regional television contracts), or maybe NBC will pay well to remain the league’s exclusive (non-NHL Network) national broadcaster. We also don’t know what the TV landscape will look like as the 2020-21 end of this deal approaches; if cord-cutting continues to accelerate and if ESPN Plus really takes off, maybe a further deal for NHL games that are only seen there will make more sense for the network than trying to strike a TV deal.

But there are some notable indications that ESPN is again interested in hockey, and that could eventually lead to them bidding. That’s especially true if the league and NBC have any interest in a split package. And that idea might have some merit for all sides.