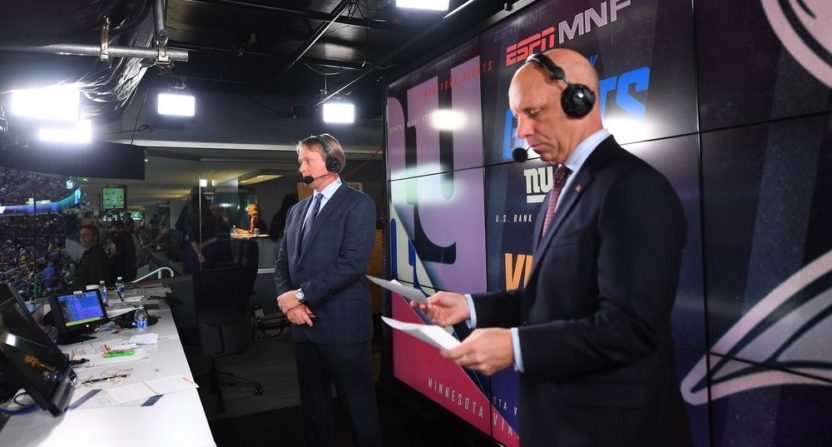 Last night’s Monday Night Football offering featured the Colts in Nashville taking on the Titans, and the game ended up being fairly close! It wasn’t an incredibly well-played contest, because it featured the Colts, but it was tied late, featured Marcus Mariota and Derrick Henry making plays down the stretch, and even offered up a baffling rules controversy featuring a questionable spot that essentially sealed the game for the Titans.

But the ratings didn’t match the relative excitement of the game itself, as ESPN got a season-low return on their considerable Monday Night Football investment.

Last night’s primetime broadcast of the Titans’ 36-22 victory stumbled to a season low with a 6.1 in metered market results.

That is a pretty substantial drop from just last week, although as Deadline notes, there’s at least one non-football factor in play:

In a season stained by overall ratings declines and political controversy, that NFL Week 6 rating is down 13% from the early numbers of the much tighter October 9 matchup between the Minnesota Vikings and Chicago Bears. That MNF season low went on to deliver a 3.7 rating among adults 18-49 and a total viewership of 10.3 million. It’s worth noting that the peek of last week’s MNF came at halftime on the Disney-owned cabler when the new Star Wars: The Last Jedi trailer debuted.

It’s probably not encouraging, though, that last week was propped up a bit by a halftime movie trailer debut, although it does perhaps explain a bit of the week-over-week drop. Last week was also the debut for Bears rookie quarterback Mitchell Trubisky, and it also went up against playoff baseball, although not the ALCS matchup between Houston and New York we had last night. Those are two of the biggest markets in the country, which couldn’t have helped ESPN.

It’s down relative to last year as well:

Year-to-year, last night’s MNF dipped just over 3% in the MM results from the Arizona Cardinals’ 28-3 demolition of the New York Jets on October 17, 2016. With a rating that matched the Jets score, that demo season low eventually landed with a 3.0 among the 18-49s and 8.4 million viewers, an almost audience bottom.

But, still, this is a troubling trend, and speaks more to the slate of games ESPN is allotted each year (and the network’s inability to flex more appealing matchups, a la NBC) than anything else. Next week’s matchup between Philadelphia and Washington might see a bit of an uptick, but at this point, it’s so very clear that Sunday Night Football is the marquee primetime slot, both for ratings and for quality of game. ESPN still routinely pulls in big cable audiences, but it might be fair to wonder if Monday night is closer to Thursday than Sunday anymore.