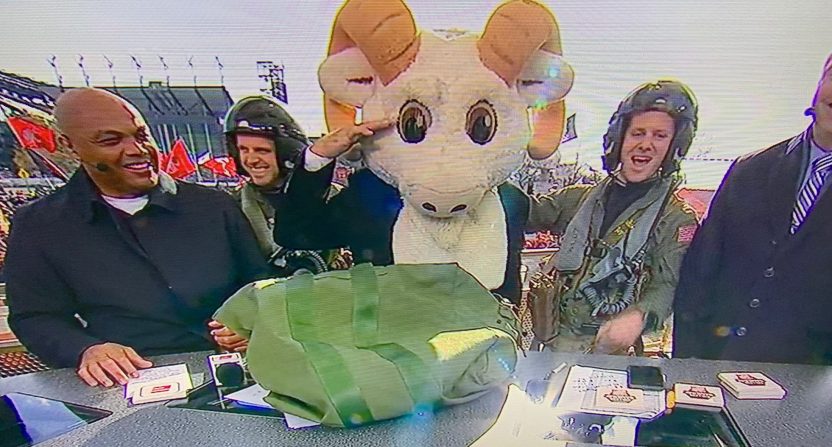 It’s Army-Navy week and officially the last regular season episode of College GameDay. I’d like to begin this week’s recap by waxing poetic about Army’s alternate uniforms because they are straight fire. Ironically, that’s the same verbiage used by Desmond when complimenting Navy head coach Ken Niumatalolo’s pocket square, which feels like an overstatement for that particular accessory. I can never tell if someone is wearing a pocket square or just left a snotty Kleenex in their suit jacket.But seriously, check out these unis:

Not only do they look good, but these black and red masterpieces (called the Big Red One) honor the soldiers from the 1st Infantry Division and their role in ending WWI 100 years ago.As you can imagine, there was a lot of pomp and circumstance in this episode and there were a few occasions where it would have been nice to have a Kleenex, or a pocket square, because I am a sucker for military stories. Some things are bigger than football.

Just some Army and Navy fans who also serve the USA 🇺🇸 pic.twitter.com/n64XIsIF4T 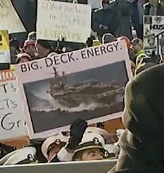 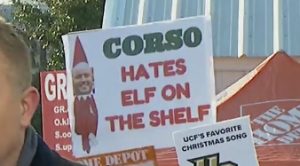 This only works if the thing you say he hates is actually good. Like, “Corso hates big-ass margaritas” or “Corso hates watching hours of college football while sitting in sweatpants.” But Elf on the Shelf is actually awful. No parent likes moving that creepy thing around every night for a month straight. So what this genius sign-maker has done here is say that Corso hates something that’s actually bad, like “Corso hates war and famine” or “Corso hates the BCS.”You Had One Job WinnerThis onside kick attempt looks like something I’d produce while drunk on Jello shots on the 4th of July. I know this because I’ve actually done that while drunk on Jello shots on the 4th of July.Bennett Moehring’s Redemption StoryIt’s been 364 days since Navy kicker Bennett Moehring’s 48-yard field goal attempt sailed wide left by just a handful of inches in last years Army-Navy game. Had he managed to connect, as he had done on two previous occasions that game, Navy would’ve secured victory as time expired. Instead, Army would win 14-13 and storm the snow crested field. Moehring’s teammates rallied around him, one even refusing to let him hit the field when he started to crumble:This is a different year for Moehring, though. He has completed 10/12 field goals and 33/34 extra points, and hopes to have a second chance to secure a victory for Navy over Army today.Heisman SaturdayFor reasons not clear to me, GameDay chose to include only two of the three Heisman finalists in their award segment and left out Ohio State’s Dwayne Haskins, fueling the assertion that no one respects him as a contender.

Haskins was interviewed by Tim Tebow later in the episode, so stand down OSU fans, though admittedly, it was an odd choice to split up the finalists in that way.TriviaNavy QBs have thrown for 300 yards in a game only 10 times. Which former Navy QB did it five times?[Trivia answer at end of article]Guest PickerCharles Barkley made a memorable entrance:There’s nothing more casual than a 6’6″, 300 pound man climbing out of a tank. Corso’s Headgear PickDesmond, Herbie, and Barkley all picked Army. Corso, former Navy DBs coach, and perhaps slightly biased on this occasion, picked Navy. 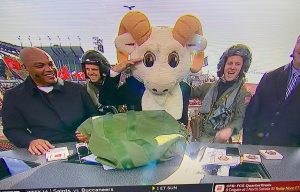 Probable next GameDay location: *UGLY CRY* This is the last episode of GameDay until December 29. I imagine they will go to the Cotton Bowl for Clemson-Notre Dame.Trivia AnswerIf you guessed Roger Staubach, you’re not alone, but you are wrong. The answer is Jim Kubiak.