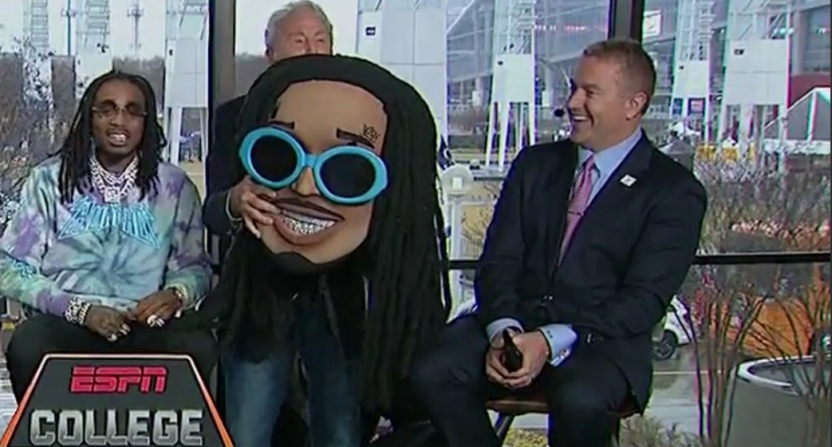 It’s Championship Saturday, which means we’ve got a mixed bag of must-see games (Alabama-Georgia, Texas-Oklahoma, Fresno State-Boise State), matchups more appropriate for Week 4 not 14 (Clemson-Pitt, Northwestern-OSU, and questionably Memphis-UCF), and Gen Z-ers humiliating themselves as they attempt to chest-pass their way out of student loan debt.  No one agrees on the CFP picks and much like the chaos a close Big 12 game/blowout Big Ten game would cause to the playoff picture, lightning strikes. No, literally.

This has never happened in @CollegeGameDay history. pic.twitter.com/6WeQ20oWMr

Due to safety, the cast is relocated from their typical set: 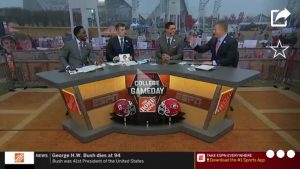 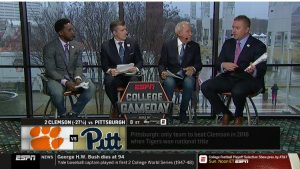 “Hi, I’m Kirk from Ohio. I like long walks by the lake and wide open receivers.”

But wait. Let’s take a closer look here. Once the table is removed, we learn about a dirty little secret. Desmond and Corso are wearing jeans with their suits and ties! JEANS. The mullet of outfits, if you will; business on the top and party on the bottom. 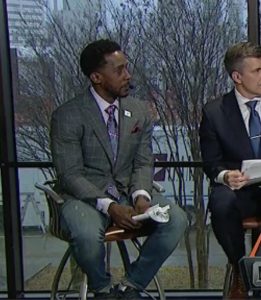 And then, a few minutes later, Desmond changed and is wearing the matching suit pants. The things ESPN has chosen to care about this week are astounding. (For what it’s worth, Corso got to keep his jeans.) 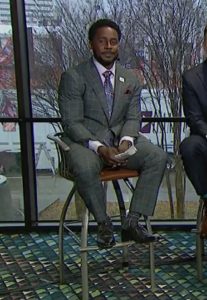 The change of scenery made for a weird GameDay episode, as the atmosphere, crowd noise, and signs are the secret sauce of this show. Still, we soldier on. 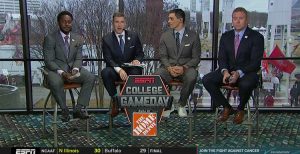 Did Opposing Fans Show Up: Uh, maybe? Take a look at the picture above. I see no fans and two flags. This back-up set was more sterile than a mule.

This is the most accurate We Want Bama sign I’ve ever seen.

You Had One Job Winner

See, look, if you douse your coach in Gatorade, you best be certain you won the game. Instead Ed Orgeron was forced to coach SEVEN OVERTIMES while drenched in a cold, sticky energy drink. And then he lost. I’d have made the team walk home.

This guy is the strength coach? You don’t say. Northwestern’s Alex Spanos has been making waves on the sidelines due to his, uh, fitted (painted on?) attire. He claims he’s wearing an XL, but damn, that shirt wouldn’t fit me.

Guest Picker: Quavo
I’m not going to pretend I know who this person is, as I listen, almost exclusively, to 90s alternative music, but apparently he’s a very popular musician, and a Georgia native. And that Quavo novelty head is one for the ages. 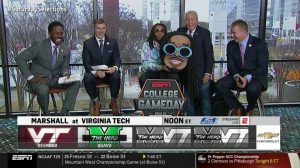 Corso’s Headgear Pick
Desmond and Herbie picked Bama, while Quavo went with Georgia. Corso went full heel, asking Herbie to bring him the bulldog head and then chose Alabama for the 31st time, which is totally something that someone wearing jeans and a suit jacket would do.

Week 15 Location: It’s been on the schedule all season. It’s Army-Navy!