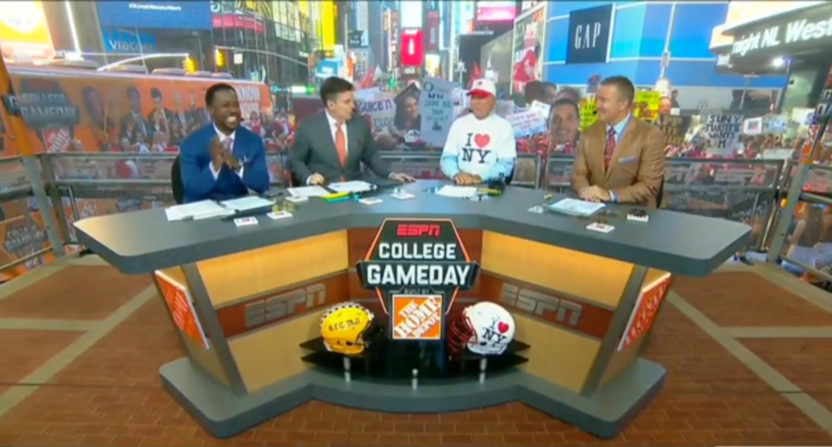 We discussed earlier how Fox and NFL Network were pulling out plenty of stops for their coverage of the NFL draft, including Joel Klatt and Troy Aikman appearing on pre-draft and draft coverage respectively, and mentioned that ESPN will have an alternate feed of draft coverage on ESPN2. Well, the network has now announced the details of that alternate feed, and they’re pretty interesting.

ESPN will be sending its College GameDay crew to Arlington for the draft, and they’re going to be doing lots with them. There’s going to be a College GameDay pre-draft show Thursday afternoon, a college-focused alternate feed for Round 1 in primetime (minus Kirk Herbstreit, who will be replacing Jon Gruden on the main ESPN show), and a one-hour GameDay special on Day 2 Friday ahead of Rounds 2 and 3. Here are more details from their release:

On Thursday, April 26, Rece Davis will host a special two-hour College GameDay Built by The Home Depot (5-7 p.m., ESPN) from the NFL Draft Experience outside AT&T Stadium prior to the draft’s opening round. Davis will be joined on-set by GameDay regulars Lee Corso, Kirk Herbstreit, Desmond Howard and David Pollack. At 8 p.m., the GameDay-themed draft telecast will offer reactions and analysis to the picks from college and NFL experts on ESPN2, while ESPN will feature host Trey Wingo with Mel Kiper Jr., Louis Riddick and Herbstreit, who will make his debut on the main set. Todd McShay, Chris Mortensen, Adam Schefter and Suzy Kolber will also be key contributors to Round 1 on ESPN.

“ESPN has presented the NFL Draft for nearly 40 years and we take great pride in finding new and exciting ways to continue to elevate and differentiate our coverage,” said Burke Magnus, ESPN executive vice president, programming and scheduling. “The draft is the perfect intersection of college football and the NFL, so giving fans the opportunity to experience Round 1 through the lens of College GameDay makes perfect sense.

This is a big move for ESPN, as GameDay is one of their most important studio brands, and it shows the emphasis they’re putting on the draft. It’s interesting that the draft is one of the few sports properties that saw a ratings jump last year, too; it’s something that clearly still has an appeal to many fans, and providing extra college-focused options might be a way to draw in more college football fans who don’t really care about the NFL.

Oh, and they’ll be simulcasting rounds 4-7 on ABC, something that reportedly came about as an attempt to repair the NFL-ESPN relationship, but something that will also undoubtedly lead to more people watching the draft.

It’s worth pondering how much of this is about challenging the suddenly-bolstered competition (thanks to the NFLN/Fox simulcast deal and Fox personalities appearing on that coverage) and how much of it might have happened anyway. ESPN already tabbed Herbstreit for the main broadcast last month, after the news of the NFLN/Fox simulcast but before the details of Fox personalities like Aikman being involved, and that suggests there was already a college focus in mind. And it makes some sense to bring the whole GameDay show to bolster that focus even more, so this might have happened even without moves from Fox/NFLN.

But as our Alex Putterman wrote earlier, this does feel like “ESPN and Fox/NFL Network are calling on their bannermen for a Starks vs. Lannisters-style showdown.” House GameDay is an important one there, and having it involved could be a big deal for ESPN.