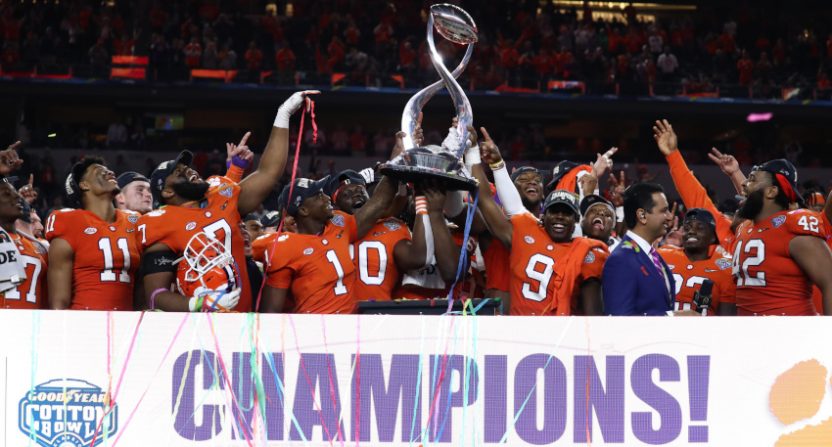 However, the semifinal games didn’t air there this year thanks to the CFP’s bowl rotation. That’s because the Rose Bowl and Sugar Bowl aren’t semifinal hosts this year, and those games have protected New Year’s Day timeslots. The CFP semifinals instead aired Saturday, Dec. 29, and the ratings were down a combined 25 percent from last year, near the level of the New Year’s Eve games. So just moving games off New Year’s Eve isn’t necessarily going to lead to audiences close to the New Year’s Day level.

First, let’s discuss this year’s ratings. As per ESPN, the early semifinal (Clemson’s 30-3 win over Notre Dame in the Cotton Bowl) pulled in 16,809,000 viewers on ESPN and ESPN2 in Nielsen total live audience, while the later semifinal (Alabama’s 45-34 win over Oklahoma in the Orange Bowl) recorded 19,069,000 viewers. Those are big numbers in their own right, with the Orange Bowl one marking 2018’s fourth-largest cable audience (behind last season’s January 1 semifinals and the January 8 national championship).

Those numbers are a significant drop from last year, though, when Georgia’s 54-48 double-overtime win over Oklahoma in the Rose Bowl recorded 26.8 million viewers and Alabama’s 24-6 win over Clemson in the Sugar Bowl had 21.2 million people watching. That’s a combined semifinal audience of 48 million versus this year’s 35.9, giving this year a 25.21 percent drop and putting it closer to the 2015-16 and 2016-17 New Year’s Eve numbers. Here’s a table with numbers for each of those games:

And here’s a scatterplot showing that:

There are of course plenty of different factors that can be cited for the drop from last season to this season, and they’re not all about the date. One big one is that neither semifinal this year was particularly close throughout; Clemson’s win over Notre Dame was a 30-3 blowout, and while Alabama only beat Oklahoma 45-34 in the end, their 21-0 lead after the first quarter and 28-0 lead in the second might have convinced many to turn the game off. By contrast, last year’s huge Rose Bowl number was helped by it being a 54-48 double-overtime shootout (although last year’s Sugar Bowl was Alabama 24, Clemson 6, and not particularly close).

There’s also the discussion of potential viewer fatigue with Clemson and Alabama, teams set for their fourth CFP showdown and third title clash. And we’re working with a small five-year data set here, one where games were previously played on New Year’s Eve twice and New Year’s Day twice. This marks the first voyage off those days altogether, and maybe it’s an outlier, and maybe the Saturday before New Year’s will pay off next year. (Next year’s semifinal games are set for the Peach Bowl and the Fiesta Bowl on Dec. 28.) But for the moment, it sure looks like New Year’s Day is the best ratings slot for the semifinals, and ESPN will eagerly be anticipating when they return to that date (and to the Rose Bowl and the Sugar Bowl) in the 2020-21 season.

*It should be noted that the actual audiences for all of these games were larger than what’s shown in the chart, as these numbers in the chart don’t reflect streaming viewers or further-down Megacast options like the ESPNEWS Coaches’ Film Room, SEC Network’s Thinking Out Loud, or ESPN Goal Line’s Datacenter. Streaming viewers alone added 500,000 to 1 million to some of the aforementioned games, as cited in the linked sources. But the key comparison here is of how these games stack up against each other, and the ESPN/ESPN2 numbers are the best basis of comparison there, as streaming numbers aren’t easily available for all of these games.