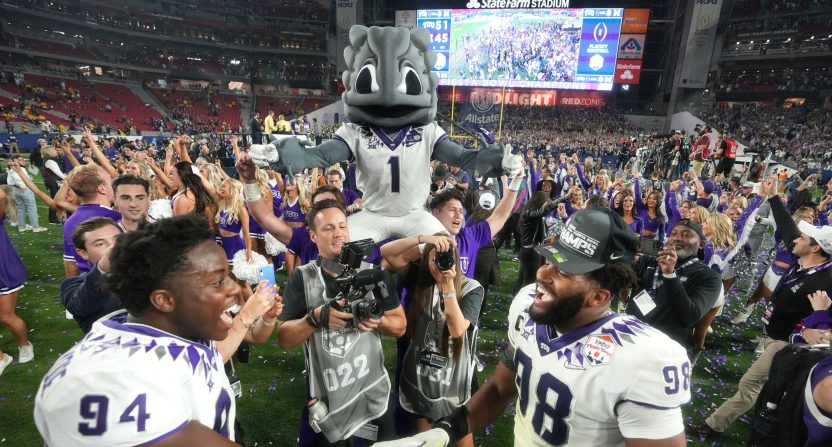 The last four years have seen some drops for the College Football Playoff semifinals, which went from average audiences of 26.9 and 21.5 million in 2017 to 16.8/19.1 million in 2018, 17.2/21.6 million in 2019, 18.7/18.9 million in 2020, and 16.6/17.2 million last year. But Saturday’s thrilling games on ESPN (and various Megacast feeds on other ESPN networks and digital platforms) produced notable audience growth, per the Nielsen fast national numbers ESPN PR shared Monday morning:

A huge part of the discussion around playoff numbers has been where the games wind up on the calendar. This year’s games were played on New Year’s Eve, which has often been bad news for the ratings, especially when that falls on a weeknight. (And that’s why, after a whole lot of prompting, the CFP moved semifinals off of weekday New Year’s Eves.) A Saturday New Year’s Eve seems a little better, especially for the early game (the Fiesta Bowl, seen above), and it’s probably better overall than it used to be given advances in out-of-home viewership tracking (still often far from perfect, though!).

Of course, playing on New Year’s Day this year would have run head-on into a NFL Sunday. That’s something the CFP very much wants to avoid, as is going head-to-head with the NFL in general. (They may not be able to avoid it completely given CFP expansion and the NFL’s own weekday/Saturday/holiday expansion, though.) So the Saturday New Year’s Eve dates were probably the best they could do. And in this case, that scheduling seemed to work out pretty well.

Of course, there are factors in the ratings beyond the date. Perhaps most significantly, there’s how close the games were (always a huge boost, as new people tune in for the finish and less existing viewers check out early). The fanbases and TV markets involved also looked solid. So we can’t isolate anything here to just when the game was played.