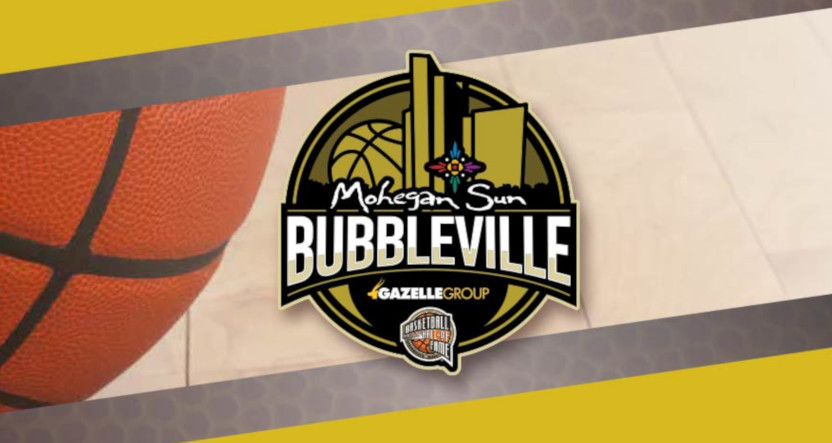 The NCAA men’s basketball season hasn’t even begun yet, and it’s already facing tremendous change. Last week saw Seton Hall pause their program and cancel their opener against Winthrop over a positive COVID-19 test (they’re now planning to begin Nov. 27 against Louisville), while Sunday saw Florida call off their upcoming games against UMass-Lowell and No. 4 Virginia (which had both been set for the “Bubbleville” event at Mohegan Sun in Connecticut (logo seen above), an event originally set to feature 40 teams and 45 games across FloHoops and ESPN platforms). And Monday saw yet more games go down, starting with No. 2 Baylor pulling out of “Bubbleville” after head coach Scott Drew’s positive test:

Drew tested for COVID-19 on Friday, the result came in Saturday morning. The rest of the team tested negative on Sunday, but the reality is opposing teams, and their doctors, were not comfortable playing Baylor in light of Drew’s positive test. Bears are No. 2 team in CBB.

As of Monday evening, there wasn’t any word on if Baylor’s game Sunday against Seton Hall will be altered. Meanwhile, Rhode Island is expected to replace Baylor in the 2K Empire Classic event at Mohegan Sun, also featuring Villanova, Boston College, and Arizona State. Elsewhere, Tennessee canceled their Volunteer Classic after multiple positive tests amongst coaches, athletes, managers and support staff. Head coach Rick Barnes revealed that he had tested positive:

A decision regarding this week's Volunteer Classic games has not yet been made. pic.twitter.com/6iXMprWI11

This week's Volunteer Classic MTE has been canceled due to COVID-19 contact tracing.https://t.co/0iHxnnrBjg

That impacts Charlotte and VCU, which lost games against Tennessee. They also agreed to cancel their planned game against each other so Tennessee wouldn’t have to host the event, and are looking at other scheduling options. Similarly, Ole Miss canceled the Justin Reed Ole Miss Classic they were supposed to host, plus a subsequent game:

Ole Miss has canceled its multi-team event (Nov. 25-27) and also the matchup against Memphis on Dec. 5 due to positive COVID tests and contact tracing.

That also impacts the other three schools who had planned to play there: Jackson State, Arkansas State, and Central Arkansas. Central Arkansas has said they’re looking for a replacement game or games, and the other schools may be as well.
Meanwhile, Duke postponed their planned opener (which had been set for their campus Wednesday) against Gardner-Webb:

NEWS: Our game Wednesday night vs. Gardner-Webb has been postponed following a positive COVID-19 test within the Gardner-Webb program.

Our season opener is now scheduled for this Saturday vs. Coppin State in Cameron (2 PM ET, ACC Network Extra).

And Arizona postponed their opener against Northern Arizona:

Arizona’s game against NAU on Wednesday has been postponed, source told @Stadium. Positive test within the Northern Arizona program, per source.

The Eastern Washington-Oregon game has also been postponed:

Our season opener at Oregon, set for this Wednesday, has been postponed.

That’s a lot of disruption already, and the season hasn’t even gotten underway yet. We’ll see where things go from here.