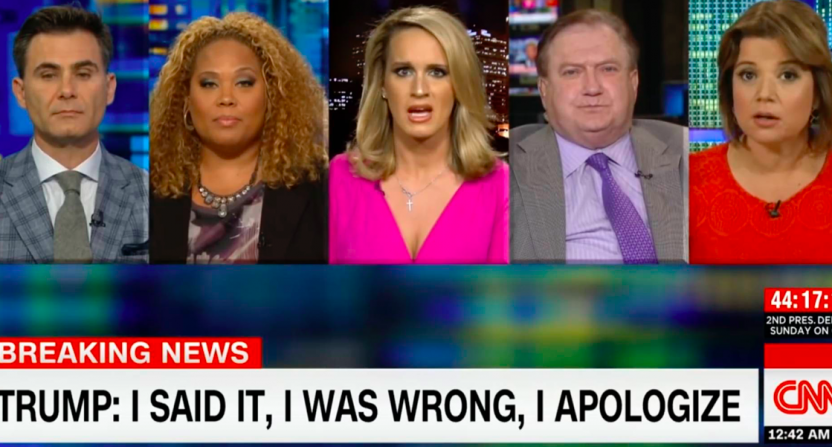 CNN has benefitted greatly from riding Donald Trump’s political rise as the network has found newfound relevance and significance nationally. You can certainly make the argument that CNN helped Trump’s campaign like no other entity by giving him millions and millions of dollars worth of advertising during the political campaign and since then they have continued to push their political coverage by constantly airing punditry debates regarding our current political climate.

With Fox News owning the right and MSNBC reaching out to the left, CNN has tried to play it down the middle on the cable news spectrum. While for many years that left the network in the political doldrums, the heightened tension of the current political climate and increased debate around Trump’s presidency has done wonders for the network. When in the past CNN would become relevant only for major breaking news stories where cable news viewers wanted the news without a slant, now they’re a part of the everyday conversation. Even the cries of “fake news” have more people caring about CNN than maybe ever before.

And as part of it all, CNN seems to have found a specific formula that has worked for them – all debate all the time. If you turn it on CNN at any point in time you’ll usually see at least two and maybe even four or 12 pundits on screen debating whatever the featured story of the day is. And that’s not an accident.

CNN’s Last-Supper-size panels have become a hallmark of its political coverage. Many of the network’s most memorable moments during the campaign were protracted emotional face-offs among paid partisans. Lord was often involved, typically with his anti-Trump sparring partner, Van Jones, another CNN employee. One night when Trump was under fire for failing to immediately denounce David Duke, a former grand wizard of the Ku Klux Klan, Lord rallied to his defense with a kamikaze historical attack, calling the K.K.K. “the military arm, the terrorist arm of the Democratic Party.” Jones, who is black, responded with an impassioned dressing-down: “I don’t care how they voted 50 years ago. I care about who they killed.”

As pure TV spectacle, arguments like this were reminiscent of the head-to-head battles pioneered a decade ago by ESPN’s daytime talk shows like “First Take,” which pitted sports pundits against one another in loud disagreements about the topic of the day. This was not a coincidence. Zucker is a big sports fan and from the early days of the campaign had spoken at editorial meetings about wanting to incorporate elements of ESPN’s programming into CNN’s election coverage. “The idea that politics is sport is undeniable, and we understood that and approached it that way,” he told me. Toward that end, the network built “pregame” sets outside debate halls with excited crowds in the background and created a temporary rooftop studio for the final weeks of the campaign with sweeping views of the White House and the Washington Monument. An on-screen countdown clock ticked down the days (then hours) to Nov. 8. Trump, the trash-talking (and trash-Tweeting) underdog who inspired raw, powerful feelings among supporters and detractors alike, was the ideal subject for this narrative framework.

This is distressing on a number of levels as we’ve seen the “politics as sport” culture take over Washington and take over our televisions. Look, it’s one thing to have a fake sports debate about Russell Westbrook and scream and yell about LeBron James and things that in the grand scheme of life aren’t all that significant to the health and happiness of a wide majority of people. But when you’re talking about the President of the United States and policies that affect millions of people, it isn’t just a game. It’s real life.

This is why ESPN should never be let off the hook for starting the wave of Embrace Debate that is now seemingly taking over every television channel on your guide. Sooner or later Love It or List It will stop trying to sell houses and it’ll just turn into David and Hilary arguing over bathroom renovations.

When everything is a debate, there’s no right or wrong, there’s no objectivity, there’s no facts. There’s just your arguing. That’s how you get Donald Trump compared to Martin Luther King on national television. Another interesting note in the Times piece is that CNN has 12 paid pro-Trump pundits on their payroll to do and say things exactly like that.

It’s the same strategy that Skip Bayless and Stephen A. Smith have built his entire national media career upon. It doesn’t matter how many times LeBron James wins a title or leads his team to victory or hits the last shot because the warped reality in Bayless’ head will always outweigh the real world. It doesn’t matter who or what Stephen A. Smith is ranting about, what matters is the “theater” of it all.

If you take “Embrace Debate” to a logical extreme, then it’s easy to see how “fake news” has become the phenomenon that it is, both in the literal and the rhetorical sense. No matter what the truth is, you get to shout “fake news” and get away with it because that’s your side of the debate and that’s all that matters. Does that not trouble anybody else?!?!?! It’s only a matter of time before someone on ESPN or FS1 actually uses that phrase as an argument.

And it’s not a liberal or conservative thing, it’s a truth thing. Unfortunately, we live in the world where the truth and the facts and objectivity don’t make for good television.