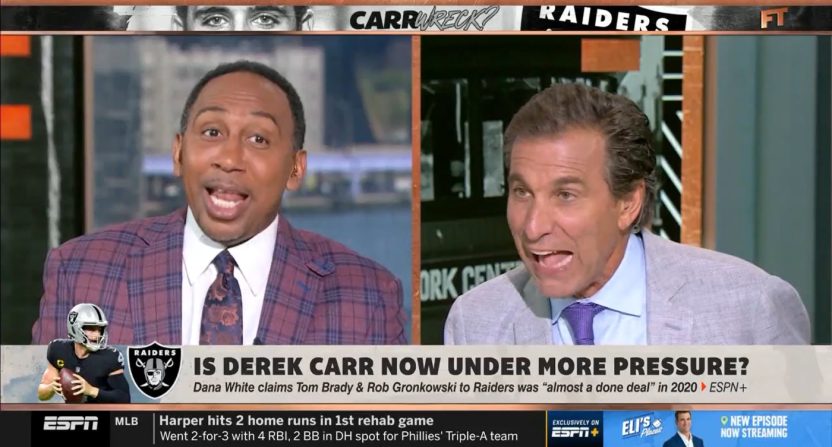 Those who have listened to Chris “Mad Dog” Russo celebrate sports history over the last few decades may not be surprised to learn he’s resisted any temptation to watch a newer sport like UFC.

During his Wednesday appearance alongside Stephen A. Smith and Molly Qerim on First Take, Russo blasted the idea of watching the UFC and shamed its many fans, seemingly forgetting that he was speaking on a network that has a more than billion-dollar partnership with UFC.

As much as Russo threw shade at the UFC, Stephen A. Smith lauded the sport and especially its president, claiming he would have voted for Dana White to be named Sportsperson of the Year in 2020.

“That man resurrected the world of sports, he kept going,” Smith said, referring to White navigating through global COVID-19 restrictions to continue holding UFC events while other leagues remained closed.

“WHAT SPORT?” Russo asked as he rolled his eyes at Smith’s affinity for White and the UFC.

“UFC ain’t for everybody,” Smith admitted.

“Nobody cares about that! You watch that?” Russo continued. “You sit there on Saturday night and pluck your $50 down to watch that?! Three rounds of kicking? You gotta be kidding me! That’s not sports! The average serious sports fan doesn’t watch that!”

Oh boy, the suits can’t be happy with that. Not only do a lot of “serious sports fans” watch UFC events on Saturday night, but they use ESPN to do it, the very network Russo was on as he mocked the sport and all of its fans while urging them to spend their money elsewhere.

However, while ESPN and the UFC are massive business partners, that doesn’t stop White from ripping ESPN. He did just that last week when he called one of their writers a “piece of sh*t f*cking journalist.” And despite the best of efforts from Smith and Qerim in playing peacemaker here, the partnership similarly doesn’t stop ESPN personalities from ripping the UFC, as proved by Russo.