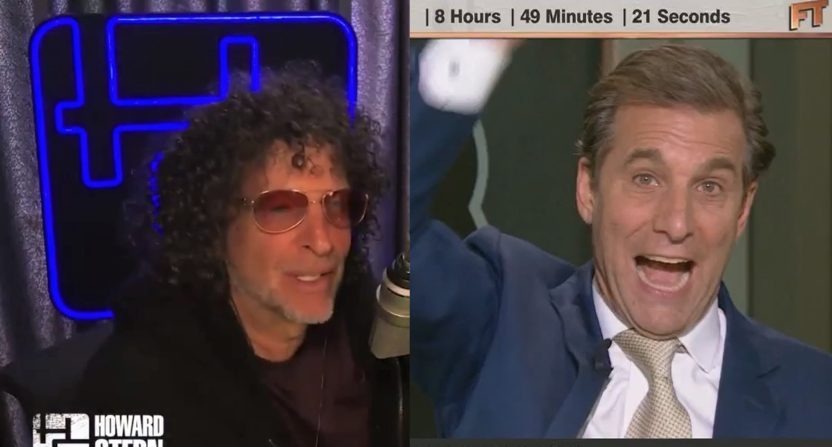 Chris “Mad Dog” Russo has enjoyed somewhat of a career renaissance since joining Stephen A. Smith on First Take. He’s also enjoyed $10,000 per episode, a figure ESPN wasn’t too thrilled about him divulging.

Russo joined the latest episode of Jimmy Traina’s Sports Illustrated Media Podcast, and during the interview, Mad Dog was asked about his June appearance with Howard Stern on SiriusXM, specifically the decision to share details of his ESPN salary with the King of All Media.

“Did you get in trouble or did you get your wrist slapped when you revealed your salary on Howard?” Traina asked around the 15:45 mark in the above podcast.

“I’ll probably get my wrist slapped again,” Russo said somewhat reluctantly. “Somebody from ESPN sent a text to my agent with two words: ‘Not helpful.’ I never said that. That will get me in trouble, too, but what the hell? It’s your show, nobody listens.”

Below are Russo’s First Take salary comments to Stern from his June segment on the show:

“I sold myself way short because I had no idea that this show would be that much fun, that he (Stephen A.) would be so good, and everybody would get a kick out of it…I sold myself, I did not do a good job with that negotiation. …They first said ‘Well, how about $7,500 and Chris can do it half from home and half in New York.’ And I said ‘If I’m gonna do this right, I gotta be here every week…so I’ll come in every week, no problem, if you raise it to 10 grand.’ They said yes in 10 seconds.”

Although ESPN wasn’t thrilled with Russo for making that information public, Dog defended the decision by noting he had to say something interesting on Stern.

Russo’s current contract with First Take is for 40 episodes, a total he’s quickly approaching. The sports radio icon is very interested in signing another contract with ESPN, although he admits those discussions haven’t started yet.

“Why would I not?” Russo said when asked if he wants to return to First Take next year. “I love Stephen A. Outside of the commute, which is difficult, what’s there not to like?”

Russo’s addition to First Take has been largely well-received, although there have been several tense moments with younger ex-athletes who are unaware of Mad Dog’s schtick, specifically during Smith’s summer absence from the show. Aside from one notable on-air confrontation with JJ Redick, Russo said getting picked on by First Take contributors has not bothered him.