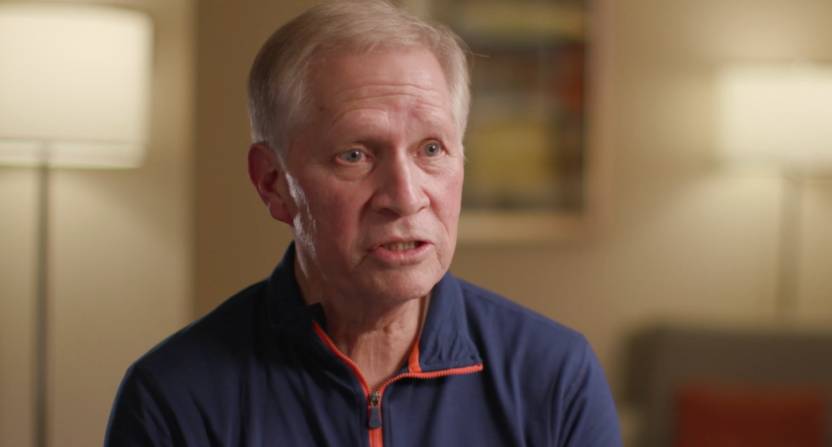 You may have seen Chris Mortensen on ESPN lately, remembered his January 2016 throat cancer diagnosis, and assumed he was now healthy. But according to a piece by Peter King published Wednesday on SI.com, Mortensen is far from cancer-free. Though his throat and tongue have been cleared, doctors last year found evidence of the disease in his left lung. In fact, he is still undergoing arduous treatment.

More treatment, this time with an IV regimen every three weeks; last week he had his 15th treatment. “I’ve asked how long this will go on, and they say maybe forever,” said Mortensen, 65. “They have to make sure it doesn’t metastasize to anywhere else. Right now, it’s metastasized to my lungs.”

That is the new normal for Mortensen: doctors chasing this insidious disease inside him. It might be this way for the rest of his years.

This is why Mortensen does not like the phrase “beat cancer.” He hasn’t. There he is, looking 85 percent of his old self on TV, and you think, Glad he beat it. “One thing people need to know—Chris still has cancer!” his wife, Micki, emailed just this week.

Mortensen is ahead by a touchdown at the end of the first quarter, is where he is.

Mortensen has managed to work throughout much of his cancer treatment, despite having difficulty speaking. Less than two months after his diagnosis, Mort broke news of Peyton Manning’s retirement. By last September, he was appearing on ESPN from his home, and by the end of the season he had been integrated back into the network’s NFL coverage.

But although Mortensen sounds totally normal on the air, he still suffers from some residual effects of throat cancer.

Another issue Mortensen deals with is radiation’s effects on his salivary glands. Mortensen fights dry mouth all the time now. Jim Kelly, survivor of cancer of the jaw, turned him onto lozenges that increase the saliva in his mouth. They help. And he carries a spray to activate saliva in his mouth. When we met recently at his hotel near the ESPN campus, I recorded a 70-minute podcast with Mortensen, then a 25-minute video interview. Then we just talked. He sounded fine. Before I arrived, he had sucked down four of the lozenges, and he used the spray several times when I was there.

On TV, he sounds like the old Mortensen. He looks close to his old self, too, except 20 pounds lighter; and his hair has come back grayer.

Obviously we’re pulling for Mortensen during his treatment and hoping he can put cancer all the way behind him.