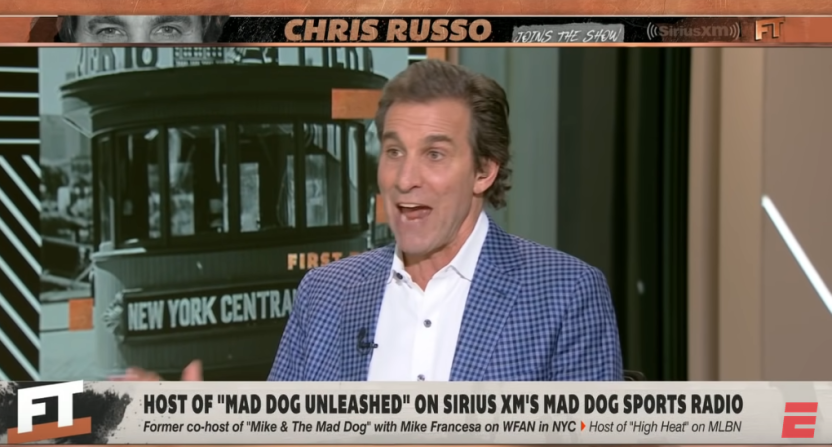 ESPN debate show First Take has gone to rotating guest hosts to argue with Stephen A. Smith (following Smith pushing Max Kellerman out last summer), but one consistent figure they’ve had since February is Sirius XM/MLB Network host Chris “Mad Dog” Russo (seen above on the show in May). Russo has been showing up every Wednesday morning to fumble with chairs, explain basketball to JJ Redick, remember some guys (poorly), and more. What’s interesting is we now know how much ESPN is paying Russo for this, as he revealed that to Howard Stern in an interview Wednesday:

Dog tells Howard that ESPN agreed to pay him $10,000 per appearance on First Take (once a week for 40 weeks).

The quality of Russo’s on-air contributions can certainly be debated, but all things considered, what he’s making here seems relatively in line with many other ESPN pay rates. In a profile on Patrick Beverley earlier this month, Ben Strauss of The Washington Post wrote that Beverley was on a “broadleaf contract” at ESPN, ” good for 15 days of work at the network,” and that “Two industry agents pegged the range for such a deal as usually between $3,000 and $10,000 per day.”  Russo’s pay-per-appearance deal would be at the top of that scale, but it’s still on that scale, and it makes some sense that he’d be at the high end considering both the prominence of First Take (generally ESPN’s most-watched studio show) and his level of media experience (he’s a broadcasting veteran, not an athlete trying to get into the media world).

And while $400,000 ($10,000 times 40 weeks) is quite a bit of money, it seems not too far out of the previously-established realm for ESPN studio shows. The challenge with determining that specifically is that we don’t know most ESPN salaries, though, and many of the personalities on ESPN studio shows whose salaries we do have an idea on fill multiple roles for the network. For example, Smith a reported $12 million annually, but that includes his work on NBA Countdown and his ESPN+ show Stephen A.’s World in addition to First Take, while Mike Greenberg makes a reported $6.5 million annually for Get Up, NBA Countdown, his radio show, and more.

One of the last real breakdowns we got of a full show’s salaries was in 2018, when Marisa Guthrie of The Hollywood Reporter detailed that the then-three co-hosts of the not-yet-launched Get Up were making a combined $14.5 million annually for Get Up and other work ($6.5 million for Greenberg, $5 million for Michelle Beadle, $3 million for Jalen Rose). Russo’s rate of pay here is lower than that (if he was on all five days of First Take weekly for 40 weeks, his $10,000 per appearance would translate to $50,000 a week and $2 million a year), but it also comes with no additional ESPN work. So he’s probably relatively high on the scale of per-hour compensation at ESPN (Troy Aikman, Joe Buck, and Smith are probably all ahead, and some others may be as well, but not too many), but his overall ESPN work is pretty limited (which makes sense considering the other jobs he has). And this fits within the general First Take budget; they don’t have a daily co-host opposite Smith since Kellerman’s exit, so they can spread that money around (and most First Take people beyond Russo have additional ESPN jobs). It’s notable that Russo told Stern he thinks he could have gotten more, though:

“I sold myself way short because I had no idea that this show would be that much fun, that he (Stephen A) would be so good, and everybody would get a kick out of it…I sold myself, I did not do a good job with that negotiation. …They first said ‘Well, how about $7,500 and Chris can do it half from home and half in New York.’ And I said ‘If I’m gonna do this right, I gotta be here every week…so I’ll come in every week, no problem, if you raise it to 10 grand.’ They said yes in 10 seconds.”

All in all, though, this seems to be working out pretty well for Russo. He’s clearly enjoying his time on First Take, as he details throughout this interview with Stern. And he’s getting paid pretty well for a once-a-week gig.