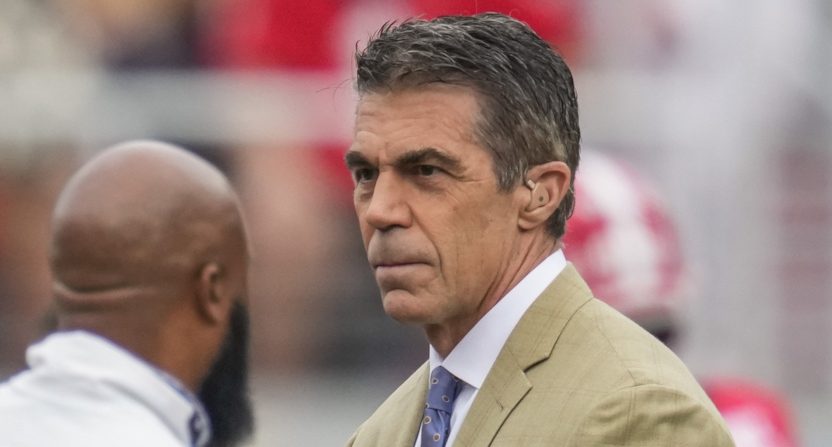 ESPN’s Week 18 Saturday NFL doubleheader (new under their new TV deal with the NFL, and kicking in before that new deal even officially starts in 2023) has the Monday Night Football crew (Steve Levy, Brian Griese, and Louis Riddick) calling the late Dallas Cowboys-Philadelphia Eagles game (8 p.m. Eastern), but it has some faces not normally seen on NFL broadcasts on the first game. That would be the top ESPN college booth of Chris Fowler and Kirk Herbstreit, who will call the Kansas City Chiefs-Denver Broncos game (4:15 p.m. Eastern), then head to Indianapolis to prepare for Monday night’s College Football Playoff National Championship.

Fowler (seen above ahead of the Arkansas-Georgia game in 2021) spoke to Ryan O’Halloran of The Denver Post this week, and he had some interesting things to say. Much of that conversation is focused on Fowler’s history in Colorado (he was born in Denver, then grew up in Illinois and Pennsylvania before returning to Colorado; he graduated from high school in Colorado Springs, then from the University of Colorado, and still lives in Breckenridge part of the year), but it’s what Fowler says about the differences between calling the NFL and college football that’s maybe particularly notable. In particular, he pointed out that this year’s high week-to-week turnover on NFL rosters around COVID-19 protocols (for example, the Broncos activated 13 players off the reserve/COVID-19 list Wednesday) has made it closer to the larger rosters of the college game.

Because of the Broncos’ roster changes, Fowler admitted his “(game-calling) chart is chaotic. My chart will look a lot more like a college board than I thought it would. I do think calling college football is the ultimate challenge because of the sheer number of players. I enjoy the pace of a typical NFL game where you can weave a few more things in.

“Sometimes, when you’re doing a high-tempo college game, a story consists of one line about somebody’s background. I think we’ll have more of an opportunity (to tell stories), but the obligation is to present this to NFL viewers and not filter it through a college lens.”

That makes sense, and it’s a notable angle to consider with the NFL changes this year and last in response to COVID-19. These two years have been highly unusual for the league, as the Broncos and their fans well know; they had to start a game without a regular quarterback last year, instead using wide receiver Kendall Hinton, with the NFL attributing that to their QBs being deemed close contacts after removing their contact-tracing devices and sitting close together. But beyond that, there have been huge numbers of week-to-week roster changes. And that’s interesting to hear Fowler’s perspective on that making it feel more like a college game for him.

There’s also maybe something there on the value of having announcers work games at multiple levels and in multiple sports. Fowler, of course, has a long background of calling tennis, hosting College GameDay, hosting college football and soccer studio shows, and more. And all of those different experiences can come in handy at times. Similarly, Levy and Griese called college games together for ESPN, and then called Broncos’ preseason games together (which they still do) before getting the Monday Night Football job. (That last link, on Broncos.com writer Aric DiLalla serving as Levy’s spotter for the final preseason game this year, is a good read that goes into on what Fowler is talking about with the player-identification charts here.) And many of the announcers out there work multiple sports, and that can help with having veteran voices ready to step in when an announcer winds up in health and safety protocols. As this situation shows, it can also be helpful when something unusual happens in one sports

But the main note here is that it’s interesting that Fowler sees this week’s NFL game he’s calling as more like calling a college game than usual given the amount of roster turnover. He’s probably right about that. And that may make this one a good fit indeed for the team of Fowler and Herbstreit.