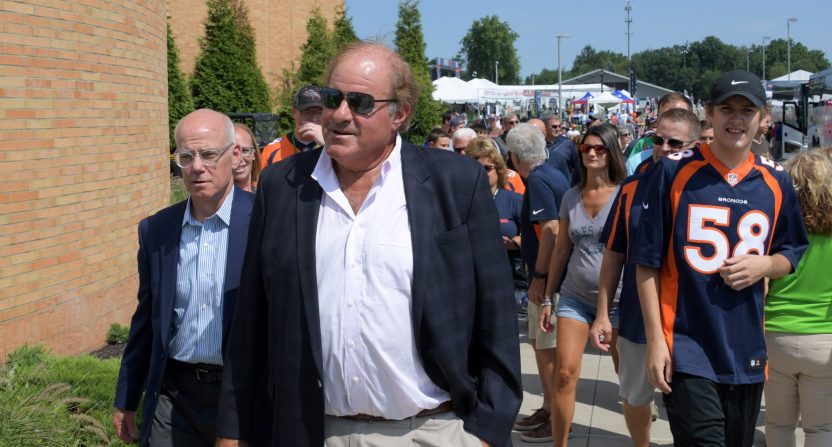 For multiple generations of ESPN viewers and NFL fans, the sound of Chris Berman screaming “WHOOP!” while a football player scampers in a different direction than the one they were going a second ago is seared into their memory.

There are different kinds of “Whoop” calls and Berman can deploy them appropriately. When a play was particularly impressive, he wasn’t afraid to raise the decibel level to an ear-splitting degree. And if the situation called for it, such as a fumble in which players took turns trying and failing to recover it, the multi-whoop was a strong tool in his highlight arsenal.

The notion of the Chris Berman “Whoop!” lives on an instantly recognizable meme even now that Berman is in something akin to emeritus mode at ESPN.

You may or may not have ever wondered how Berman came up with the “Whoop!” as one of his signature catchphrases. Turns out, the answer might be the least surprising NFL player possible.

On a recent appearance on Pardon My Take, Berman explained how Hall of Fame running back Barry Sanders inspired the iconic call because “there’s no other way to describe” what the Detroit Lions superstar could do.

Chris Berman tells us how he came up with “WHOOOOP” pic.twitter.com/t6kvh9QLvp

“The ‘Whoop’ came from Barry Sanders,” said Berman. “It came as a ‘whoa, there’s no other way to describe Barry’s…” trailing off while he mimicked Sanders’ flexibility.

“I think his ankles were bionic. [Tom Jackson] and I both think, cause there’s no way you could swivel as a human being like this. And so that was the “Whoop!” and the “Whoop!” That was more Barry’s moves that come from Barry Sanders. He’s the impetus for that.

“I get stopped all the time…like, say it, ‘Whoop!.’ ‘Whoop!’ They’ll go nuts. So now I’ve moved into the squealed pig. But it started with Barry Sanders and of course a Lamar Jackson-type of player who you would do it with. But out of respect to Barry.”

As if Sanders’ career wasn’t impressive enough, add that accolade to his mantle.

You can still hear Berman “Whoop” it up over on ESPN+ where he hosts NFL PrimeTime  and “The Fastest Three Minutes” during Monday Night Football halftime. Whatever you think of the ESPN lifer, you’ll either miss that “Whoop” when it’s gone or it’ll just be stuck in your brain in perpetuity anyway.

You can listen to Berman’s full appearance here.