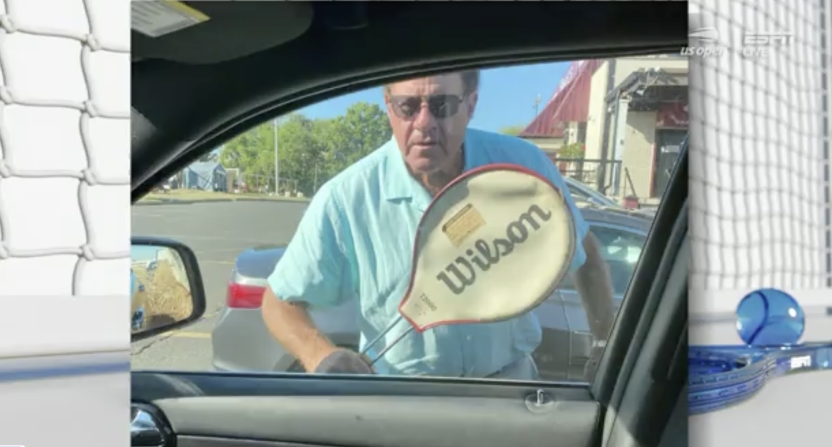 ESPN has a VERY good thing going right now with the US Open.

An average of 2.7M viewers watched @serenawilliams win her first round match at @usopen

Many circled last night’s match, against the world’s number-two-ranked player Anna Kontaveit, as the likely final singles match for Williams, who announced last month she’s retiring after this US Open.  What we got instead was an instant classic, an enthralling Williams upset win, and one that is sure to bring in absolutely monster ratings. It was close to perfect for ESPN, minus the network awkwardly airing an Oprah Winfrey-narrated tribute video that pretty clearly seemed to be planned for when given Williams was actually eliminated.

So as ESPN opened up Thursday’s coverage of the US Open, obviously there was going to be a significant amount of discussion about Williams before the broadcast would start moving around to some of the many matches that were in progress.

While it’s debatable if tennis fans would have preferred to concisely go straight to some of those matches over more discussion of Williams, what really can’t be debated is that tennis fans weren’t served at all with the addition of 25 minutes of Chris Berman on the US Open set.

How does ESPN keep the momentum going in the wake of the too good to be true Serena Williams upset win last night?

In total, we got 25 minutes of Berman. And things didn’t really get much better as it went on.

Tennis fans certainly took note of ESPN featuring Berman over some of the other matches taking place.

@espn get it together. It’s 12:25 pm and it’s still round table talk with Chris Berman et al while actual @usopen matches are being played. Thank God ur Spanish channel is showing Kostyuk/ Azerenka. Compelling in this political climate. Also. Tennis.

Chris Berman on #USOpen coverage? May I ask why?

Iga Swiatek's match with Sloane Stephens at the @usopen. But @espn is showing Chris Berman talking to some of the network's tennis crew. Why is ESPN so bad at this?

You can tell Chris Berman is not much of a tennis guy….he has barely said anything on @espn panel in 10 minutes with Rennae Stubbs, John McEnroe and Chris McKendry

Chris Berman made ESPN relevant in the early years and nostalgia is wonderful, but they need to show more live Tennis to start their broadcast https://t.co/ijYGLunIZQ

And again, it’s a good debate on if ESPN should continue leaning into the Williams story over actual live tennis. I’d guess the numbers suggest that discussion about last night’s win actually might perform better than the live events that were being skipped.

That said, the 25 minutes commercial-free with Berman meandered, and were just flatly awkward. He didn’t blend in well. He couldn’t participate in a lot of the more substantive conversations. It just wasn’t good.

Berman still delivers when he’s in his zone of calling NFL highlights and discussing the league. When ESPN opts to deploy him elsewhere, it’s not good. Earlier this summer, Berman clearly struggled to name a single participant in the Home Run Derby. That’s not good TV, and it doesn’t reflect well on Berman. It also doesn’t reflect well on ESPN, which keeps putting him in these positions.

Boomer is a legend but petty sure he’s filibustering here because he can’t name any of the younger contestants pic.twitter.com/Jqm4d3GY8b

Our Phillip Bupp said it the best in our Slack. “Really, no one wins. You either don’t like Berman and hate the segment no matter what he says, or you like him and you’re embarrassed for him.”

As Berman and other notable veterans age, the network has to be more mindful on balancing showcasing their legends vs. putting them in good positions to continue contributing. They also have to give viewers what they actually want. I’m sorry, but Chris Berman appearing for 25 minutes on US Open coverage, for the first time in 20-30 years, falls well short of that.