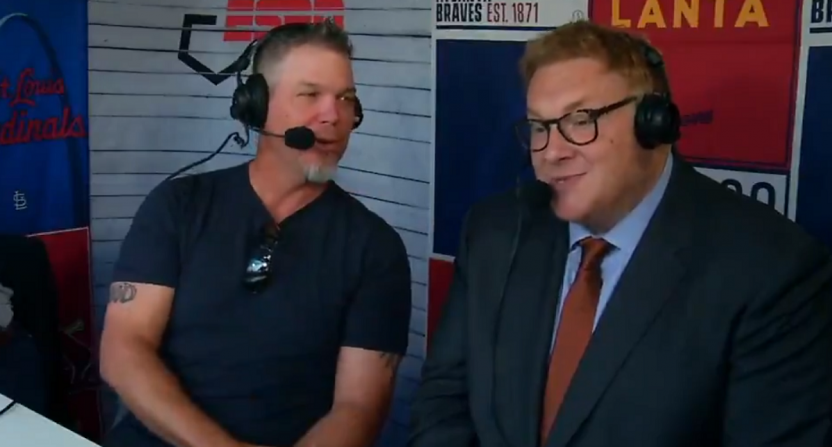 While David Ross had been working in an odd dual-role with ESPN and the Cubs, he’s now with the Cubs full time as their manager.

That left a hole in ESPN’s MLB analyst rotation, though, and while a similar gap wasn’t filled on Sunday Night Baseball (with ESPN opting instead to go with just Matt Vasgersian and Alex Rodriguez), ESPN’s rotating Wednesday Night Baseball team will have a new face. It’s a familiar one, too: Atlanta Braves legend and Hall of Famer Chipper Jones.

That’s according to a report from Carroll Rogers Walton at the Atlanta Journal-Constitution, who broke the news tonight.

“A lot of people don’t know this, but if I hadn’t played baseball, if I had gone to college, I would have majored in communications,” said Jones, who was the No. 1 overall pick of the draft by the Braves in 1990. “I wanted to be a broadcaster. I really have fun talking the game. I feel like I have something to impart upon the people tuning in, and I have fun doing it. I get the chance to do it on probably the biggest stage you can, maybe next to ‘Sunday Night Baseball’ (on ESPN).”

As Walton notes, Jones has worked in a booth before, though only for two full games. Still, he certainly sounds prepared for the challenge:

“If I had to sit in the ESPN booth and talk about religion or politics or astrophysics, obviously I would be out of my element,” Jones said.“But this is something that I’ve lived my whole life. I’ve stood 60 feet, 6 inches from the best in the world, and I’ve played third base for two decades, and I have a lot of input and a lot of knowledge on the subject. I know it takes a little something to be able to get your point across, but that doesn’t intimidate me.

“I’m not going to sit here and say that my way is the way, but I feel like I can do a lot like Smoltzy (John Smoltz) and Glav (Tom Glavine) and Frenchy (Jeff Francoeur) and those guys, who have become pretty good at their craft in trying to get across what it’s like to be in the game.”

Chipper certainly has the nicknames down. He’ll mainly work alongside Boog Sciambi, with whom he had a memorable moment last year when he recalled Sciambi giving Chipper bad hitting advice, leading to Jones glaring up at the booth from home plate.

Here's the Chipper/Boog story in all its glory. Great work by the production crew to have the video ready. pic.twitter.com/lt0IAuoaqZ

“He’s so good,” Jones said. “He just tees you up and then you go reflect back on your experience.It’s not that difficult. You’ve just got to have a conversation with Boog and ignore that millions of people are listening.”

It looks like a very solid get for ESPN. Jones and Sciambi especially seem like a very comfortable pairing when they’re together.