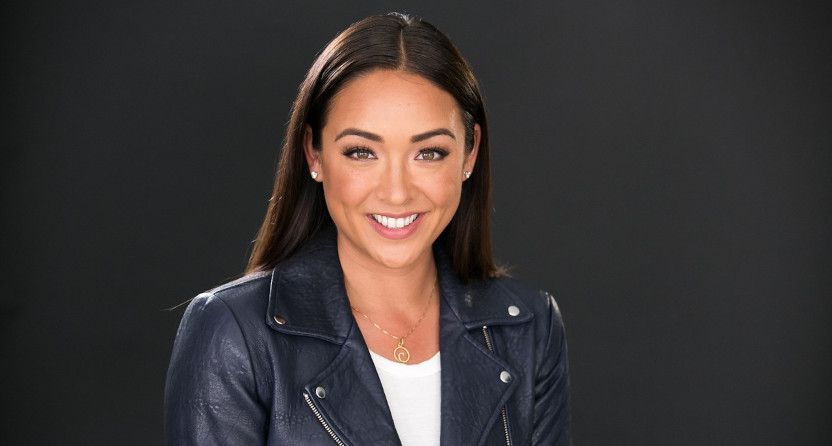 The ESPN/ABC coverage of the NBA Finals sees a lot of focus on what they air on linear TV. But there’s a significant amount of notable content they’re putting out beyond that, and one particular thing there is Hoop Streams, the digital (app/YouTube/etc) show they’ve been doing since 2018. Hoop Streams host Cassidy Hubbarth (seen above in 2018) talked to AA about that show this week, and said the show’s evolved significantly over the past few years.

“As with everything in life, it’s taken on a lot of different forms over the past few years. But the first year, when we launched in 2018, it was towards the end of the season. And we went from just me and another host in Treavor Scales, and my first show that I did with him was in San Francisco, coincidentally. And later that year in the Finals, we were hosting hour-long shows with talent coming in and out of the show. …That year alone, we grew rapidly.”

She said part of what’s appealing about Hoop Streams is its commercial-less format.

“There are no commercials. We’re an hour live. So there’s a lot of juggling. Last show, we were bringing guests in and out of the show, and just kind of doing it on the fly.  …And we try to show you the chaos of what covering the Finals is like and how many voices are there.”

Hubbarth said the 2020 COVID-19 quarantines caused Hoop Streams to adapt rather than fold.

“Even during the shutdown, we did weekly shows called QuaranStreams. We try to keep up with our audience, and continued to do live stream shows; even with no sports going on at the time, we did reactions to The Last Dance. …We just tried to evolve with the digital landscape.”

She said they had to carry over some of those remote lessons into the 2020-21 NBA season, as that season allowed some on-site content, but not as much as usual.

“Last year, there were still a lot of restrictions. They travelled Countdown, but the amount of people who could travel to the Finals last year was very limited. So we did our shows from multiple sites. …We still were able to have a good crew even though we weren’t on site.”

This year, Hoop Streams has been live from the Eastern Conference finals as well as the NBA Finals, and Hubbarth said that was a big boost for her to get back into her best form with the show.

“It was great. I hadn’t been doing many Hoop Streams shows during the year just because of sideline assignments and so on. …To be able to get the reps heading into the Finals, that was awesome. And it was awesome to be there for a seven-game series and understand how the Celtics battled through that. That’s helping us understand what we’re seeing here in the Finals.”

She said there’s also a complicated set of relationships to consider with on-site coverage, as ESPN sends so many people to each stage of the playoffs, so that experience at the conference finals was valuable.

“The relationships on site, building those, it’s kind of a chaotic controlled blissful exciting mess.  There are so many people, we’re on the court, and we have a staff that also works on Countdown and NBA Today. So not just for us in front of the camera, but for everybody behind the camera, to get that momentum heading into the Finals is really great.”

Hubbarth said on-site shows are designed to bring fans closer to the game.

“The whole point of doing the shows from site is to try to bring the fan the environment, the feel, the intensity of the Finals. So when people are scrolling on their phones or devices, or watching on YouTube or the app, they’re usually on the go. And our other shows are also on site, but we’re right there on the court. …And we’ve had people in the past come over and say hi during our warmup. And if we’re having a conversation about Jayson Tatum’s poor shooting in Game 1, he’s shooting right behind us. We’re bringing the fans courtside and allowing them to see what the environment is like heading into the Finals, and kind of feel what the attention is like.”

Airing 1 hr before tipoff, the show is courtside throughout the #NBAFinals

Hubbarth said she’s also well aware of the younger demographics for a digital show, and that feeds into how Hoop Streams approaches its coverage.

“We try to give a voice to the digital audience, and try to separate ourselves from the rest; we have so many people here from ESPN covering this.”

Hubbarth has been with ESPN since 2010 in a variety of roles, but has particularly leaned into NBA coverage for them over the last decade. She said covering the NBA for ESPN is fantastic, as it was her preferred sport growing up.

“The NBA has always been my favorite sport. I grew up in Chicago, I grew up in the Jordan era. It’s kind of always been in my blood. We were big basketball fans growing up, and I played basketball my whole childhood. Growing up in the 90s, pop culture and the NBA kind of crossed: Jordan and Barkley and Rodman and those guys, they weren’t just athletes, they were celebrities. So that shaped how I viewed the NBA.”

She said she also likes to bring that sports/culture paradigm to her current coverage.

“And that’s how I like to cover the NBA as well. I love digging into storylines, digging into personalities, digging into teams’ styles of play. I think it really speaks to my experience as a sports fan. I’m just very fortunate that I’m not only getting to do this job that I dreamed of doing since middle school, which is sports broadcasting, but that I get to cover the exact sport that I’ve always held as my favorite sport. I can’t believe it; it’s a dream come true.”

Hoop Streams will be live on ESPN’s app and digital channels one hour ahead of each NBA Finals game, including Wednesday’s Game 3 (9 p.m. ET) and Friday’s Game 4 (9 p.m. ET).